Hello Everybody.  I thought I would make a card with some of the goodies I was lucky enough to win over at Pixie's Playground.   As it happens one of the items was a Cuttlebug Embossing Folder - Thanks Words, and as Joanna Sheen doesn't have any at the moment I've found one to show you from another site.  I also used one of the stamps which is a set by Wendy Cotterill - Up the Garden Path, again Joanna Sheen doesn't have this particular one at the moment, so I've found another site just so you can see what it looks like. 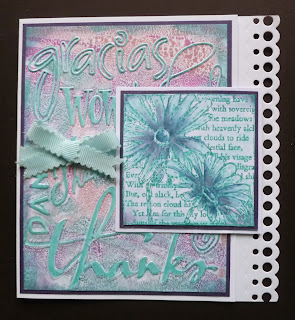 This is what I used for the card:


Firstly I used the three colours of Distress Ink and inked randomly on the deboss side of the embossing folder by sweeping the ink pads over it to cover.  It is best to use the light colours first and try not to overlap too much so the pad doesn't get contaminated.  Light colours on a dark ink pad will not seriously affect them, but the other way round could.  I placed a piece of white card carefully in the folder and ran it through my embosser, and when removed the raised lettering was still white.   I decided to colour the lettering with Peacock Feathers Distress Ink using a water brush to cover just the letters accurately.  It took a little time but I like the result.  I then took a scrap of the white card and inked the stamp with the Peacock Feathers ink, and when stamped used a water brush to drag the ink from the outline to fill in the flower. To add some depth of colour I used a little more of the Peacock Feathers with a bit of Seedless Preserves and a little Memento Nautical Blue on the flower and also round the edges of the stamp to add depth.  I then did the same to the embossed card just round the edges.  I then mounted the embossed card on the purple card and added a strip of ribbon.  I made a bow with another piece and added this to the side and then mounted this on the card.  I mounted the stamped topper on purple card and then a piece of white.  At this stage I decided to cut the top of the card to just beyond the embossed layer and overlap the edge with the stamped topper.  I then used the Nellie Snellen Border Die on the back edge of the card, and decided in order to balance the design I would cut a piece off first before die cutting.

As this is a 'Thank You' Card, I would like to use this to say a big thank you to you all for taking the time to stop and look, and to my regular followers, and all those that take the time to comment, and such lovely comments too.  I would also like to wish you all a very Happy New Year, and here's to lots more creativity in 2014.

I am entering this card over at Pixie's Playground where we have to use snippets/scraps somewhere in the card.  I used snippets of white stamping card and purple card for the topper.

Wowsers, Pat do I love this. I remember the folder when Miss had it up as prize and you certainly did it justice.
May have to hunt out the Peacock feathers... love it!
:)
Shaz in oz.xxx

What a beautiful card Pat, I love the inky embossed panel and the the stamped image is gorgeous. I like all the daisy shaped flowers.
Happy New Year,
Jean x

Such a beautiful card----such a lovely post! Congratulations, well done, Pat, on winning that prize and thank you for sharing it on here----- I will never be a crafter (we each have our own gifts!) but just I as will never be an Opera singer---it doesn't stop me from enjoying the talents of others----- xx

This is an amazing work of art with your winnings, Pat! I love how you distressed and colored and designed this beauty! I wish you all the best for a crafty, healthy, and happy 2014!! Cheers!! Darnell

Double wow from me Pat - what a stunner! And so good to see you using some of your prize so beautifully!

Thanks for explaining how you made this very pretty card Pat. It's just delightful.

Happy New Year to you.

Big congratulations on winning the nifty prize from the Playground, and what a lovely card to say how much you appreciated the products. Well done! Love the soft colors, and enjoyed reading the how-to's. Beautiful beautiful. TFS