Hi there crafty friends.  I made this card to send to someone in Australia and am hoping that she has received it in time for her birthday today.  The postage service to there can be a bit variable, and I could perhaps have sent it a little sooner than I did.  Anyway when she receives it I hope she likes it.  It was made using one of the bags from a set by Creative Expressions called Bags of Style. 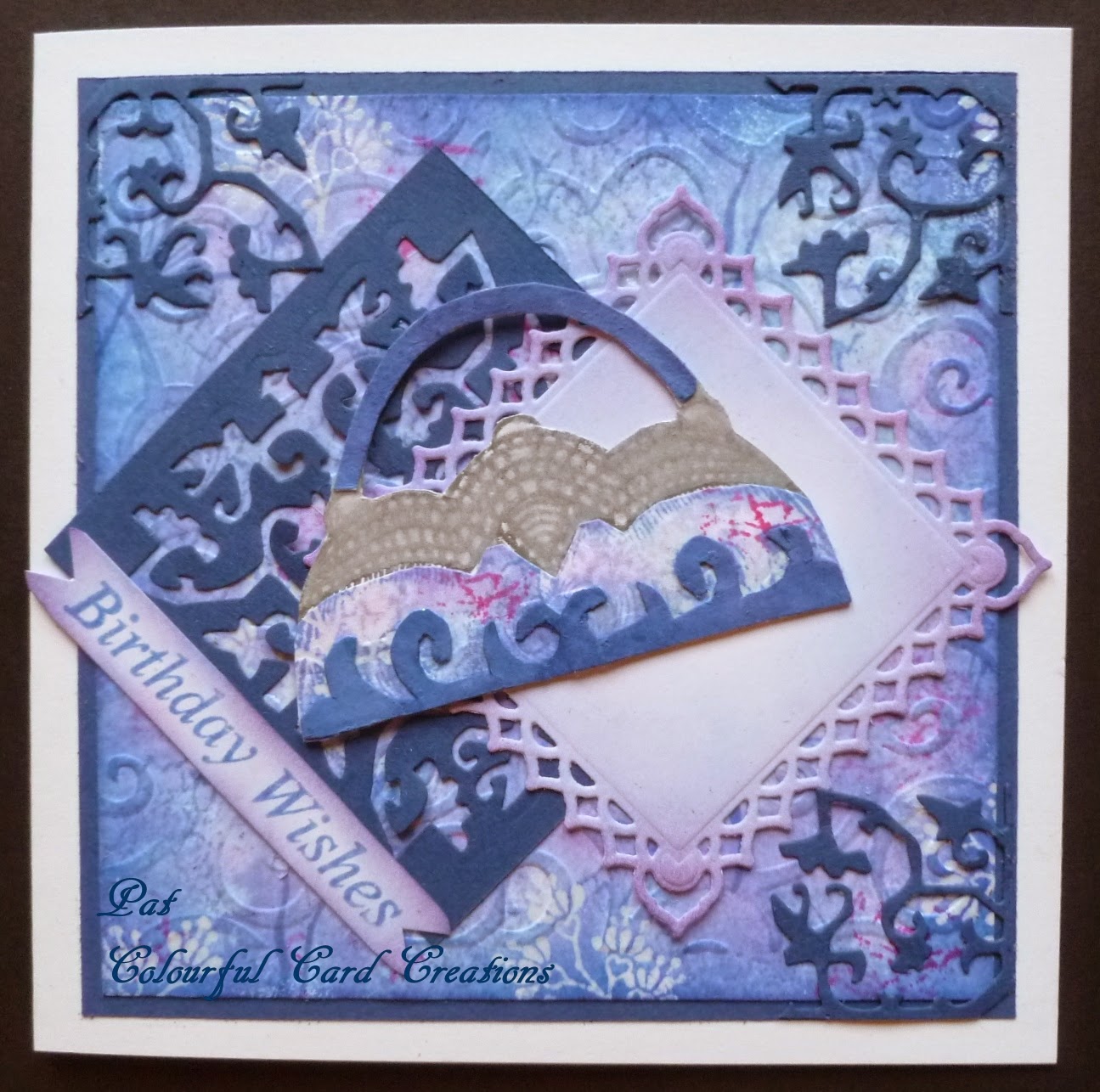 For the background I started with a snippet of white stamping card and stamped and embossed using WOW EP White Pearl, and a stamp from a set by Chocolate Baroque called Lily  and then stamped using Adirondack Stonewashed ink with a stamp from a set called  Poppy Meadow .  I also used a Crafty Individuals Crackle Background stamp for extra texture.  I stamped it in my hand using my fingers to support it, just to get little touches of it using Adirondack Stonewashed and Distress Ink Picked Raspberry.   I finished by embossing with a Cuttlebug embossing folder called D'Vine Swirls and on removing from the folder I inked the edges and the swirls with some more Stonewashed ink and Picked Raspberry.  I layered this on to a piece of dark blue card.

I then found some more snippets/scraps of dark blue card and die cut using a Spellbinders die D- Lites  called Grate Works which I cut into four, and filled three of the four corners with it.  The piece of card from which it was cut I decided to use as a mat which I paired up with another mat, which I had cut but never used, using a SB die called Captivating Squares,  the second size die, which I distressed using Adirondack Stonewashed and DI Picked Raspberry, using it sparingly just to give the mat a more lilac tone.

I used another snippet of white card and with WOW EP Metallic Silver stamped and embossed one of the handbag stamps,  and then I decided to use WOW EP White Pearl over the top of the top piece of the handbag to fill in the pattern.  So I went over it with a Versamark Pen and then used the embossing powder.  It didn't quite have the effect I thought it would but decided to leave it.  I then paper pieced the handbag using a leftover section of the background card and a piece of paper which I coloured using blending foam and Stonewashed ink for the handle and the bottom of the bag.

I finished by layering it up on to a white square card and stamped a sentiment on a snippet of white card using Stonewashed ink and then distressed the edges with the Stonewashed and Picked Raspberry ink as for the topper.

Thank you for stopping by today, and I hope you enjoy the upcoming weekend.

Pixie's Crafty Workshop  Challenge No. 128, where we have to use up snippets of card and paper, and I have used quite a lot of snippets of white and dark blue card.  This is also my third entry for a special challenge that Di is running which is to enter three cards in two weeks.

Hi Pat, Oh my, you have so much lovely detail in this card. I really like the way you combined the DI colors to achieve that pale lilac shade. Ditto on the 3 corner embellishments. You've used some dies & products that are new to me, and that Divine Swirls is one of the prettiest C/B folders I think. Great use of it on this pretty card. Love the handbag, and that matching trim is just so effective. Your friend will love this & what a fantastic birthday card to make her feel special. TFS & Hugs. Off to check out some of your other posts that I've missed lately.

Oh my golly gosh Pat - what a ton of work went into making this fabulous card! Great use of snippets and also, as always, such fun to read how you went through the process of making the card.

Yup, I sorted the Mr Linky out right away - never a problem!

It's beautiful. It hasn't made a physical appearance in Australia yet, but it looks stunning in the picture. I am a very lucky girl. Thank you so much Pat xx

A lovely card Pat such a lot of interest and textures.Great use of the die cuts as well.
Jean x

This beautiful card is a hit parade of snippets, Pat! I love it, both the design and the coloring! You have a great weekend, too! Hugs, Darnell

Beautiful card Pat, the colour & background is gorgeous. Have a great weekend, Shirleyx

This is stunning That purse looks real.

What a gorgeous card...You aced this one

Whoo EEE..just saw you are a winner over at the Snippets Playground! WTGo, you! Well deserved, and so happy to see your name, as I finally got over to take a slower look round this evening. Hugs