My Five Favourite Creations of 2014

Hi all.  I am joining in with the very talented  Debby's five favourite creations for the whole of last year and this is the follow up to the Christmas selection which I have already posted. 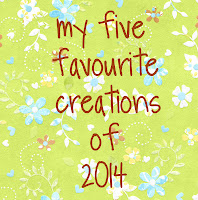 Some of them just leap out at you and asked to be picked, but then there are others where deciding which to show is a bit of an 'eeny meeny mo' exercise! Anyway, these are they: 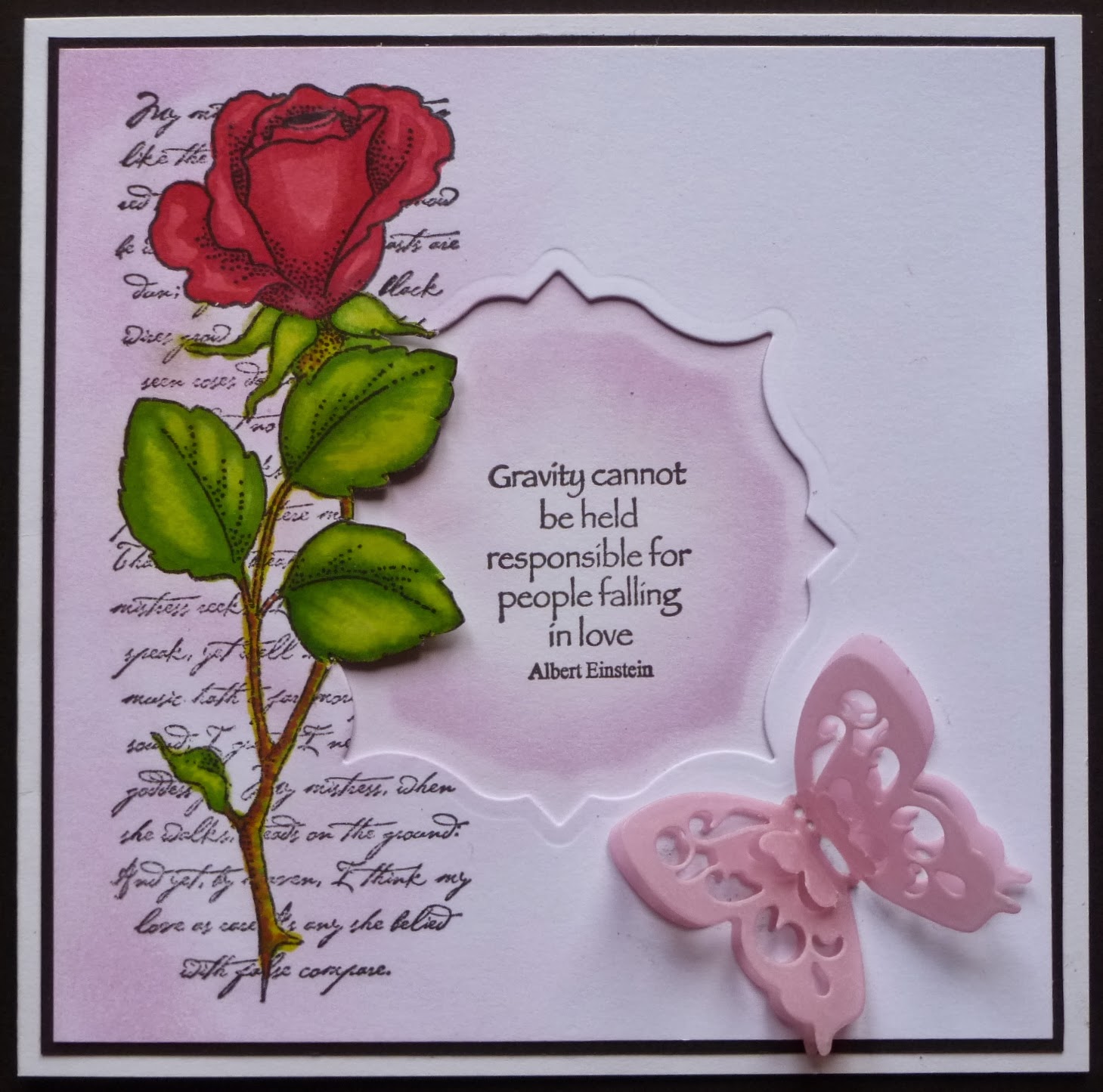 I was pleased with this card because I tried a technique called 'under the edge' die
cutting for the first time and I felt the Promarker colouring of the rose worked well. 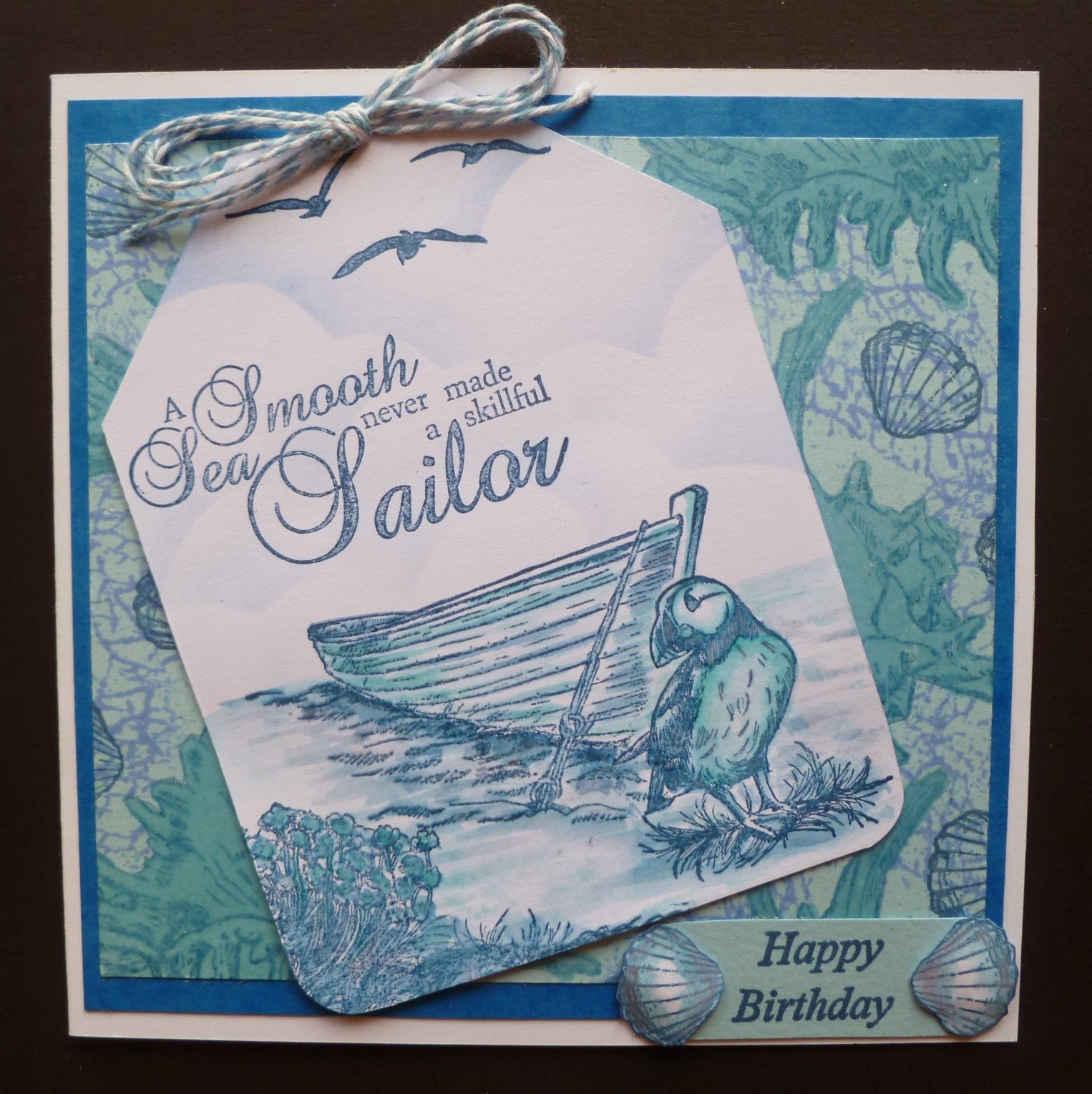 I have chosen this one because it was quite a complicated card to make and I love
these stamps, and also I was so pleased because it was chosen as the card of the month
over at Crafter's Companion. 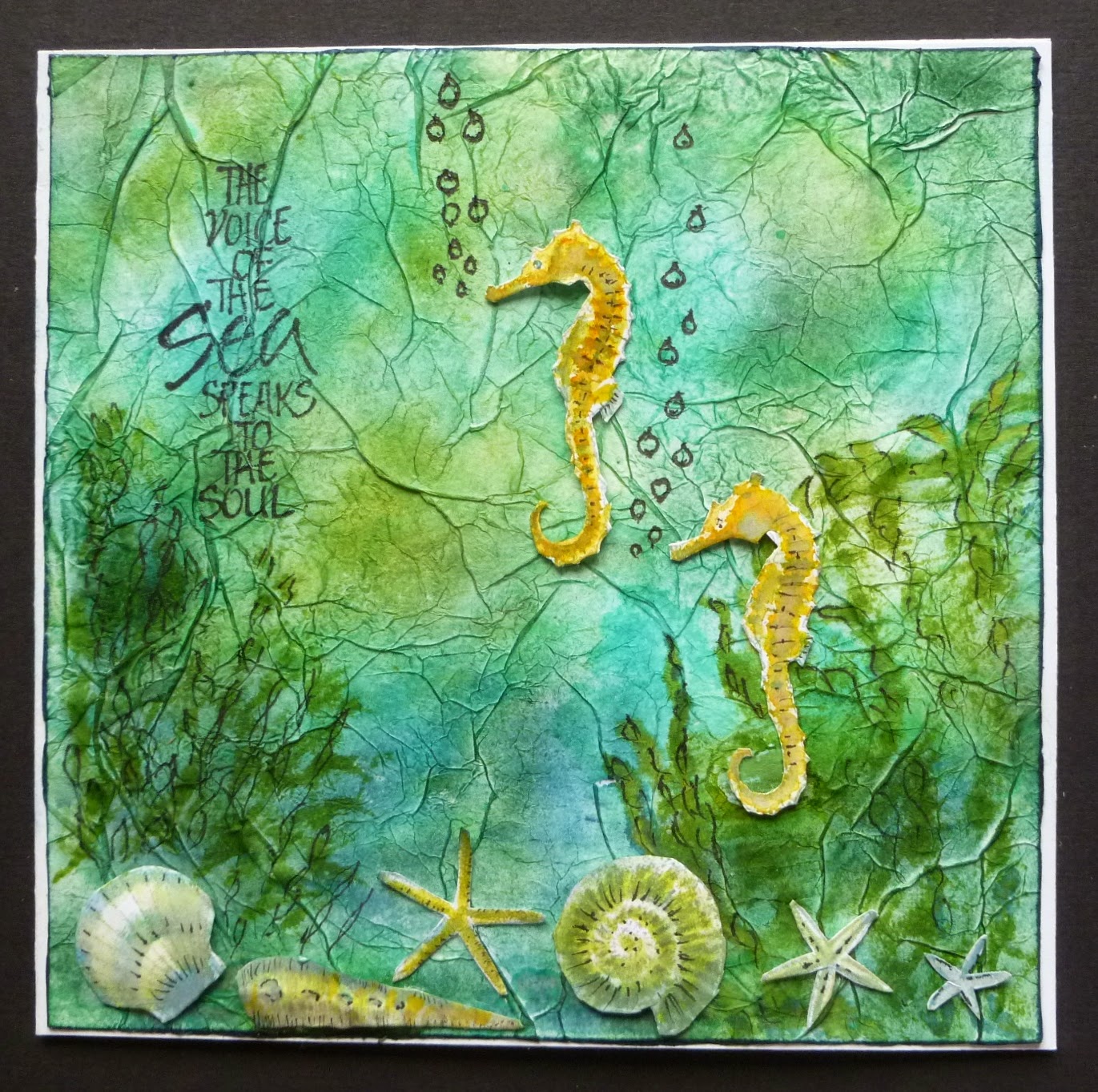 I used another new technique for this card which was to use tissue paper glued
to the card for added texture and I do love anything to do with the sea. 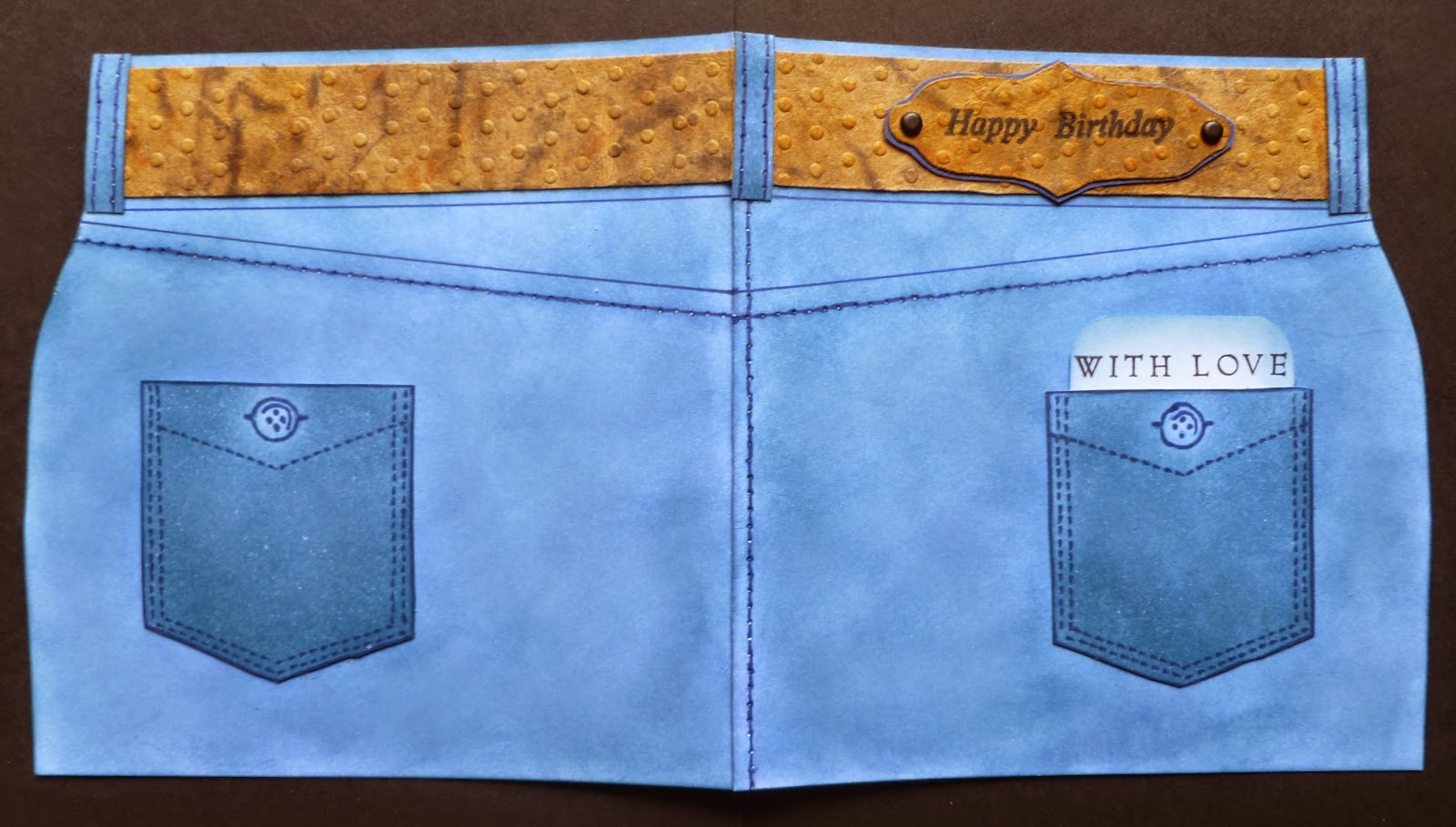 This card used another new to me technique which had just become very popular
to do which was to make faux leather with card softened with glycerin, and also the
different shape to the card which is something I rarely do. 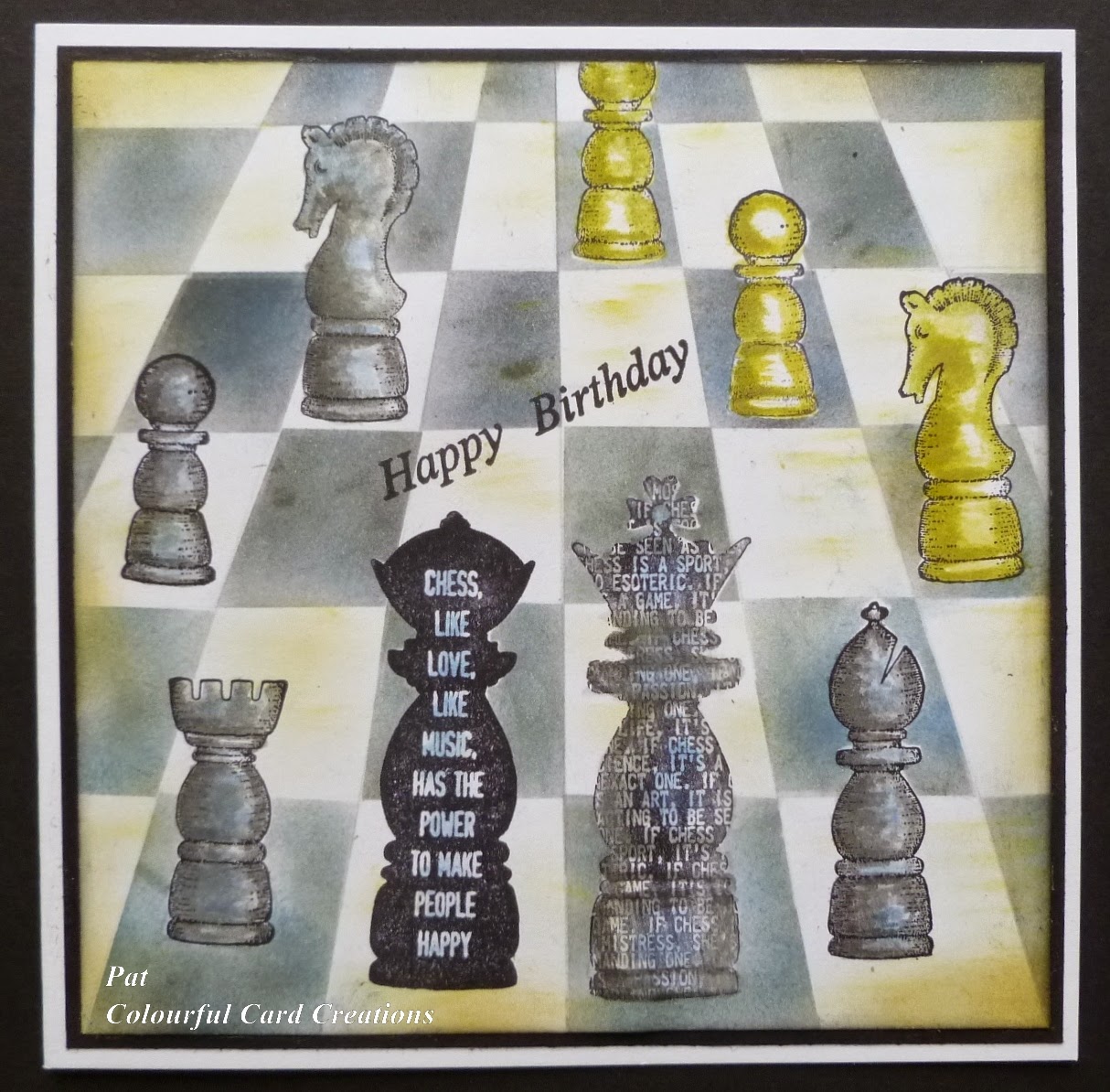 Another male card and I was pleased with the way it turned out as I made the
chessboard from scratch and the perspective worked better than I expected.
I have to say this is something that I probably won't do again as it took a very
long time to mask off and colour all the squares. 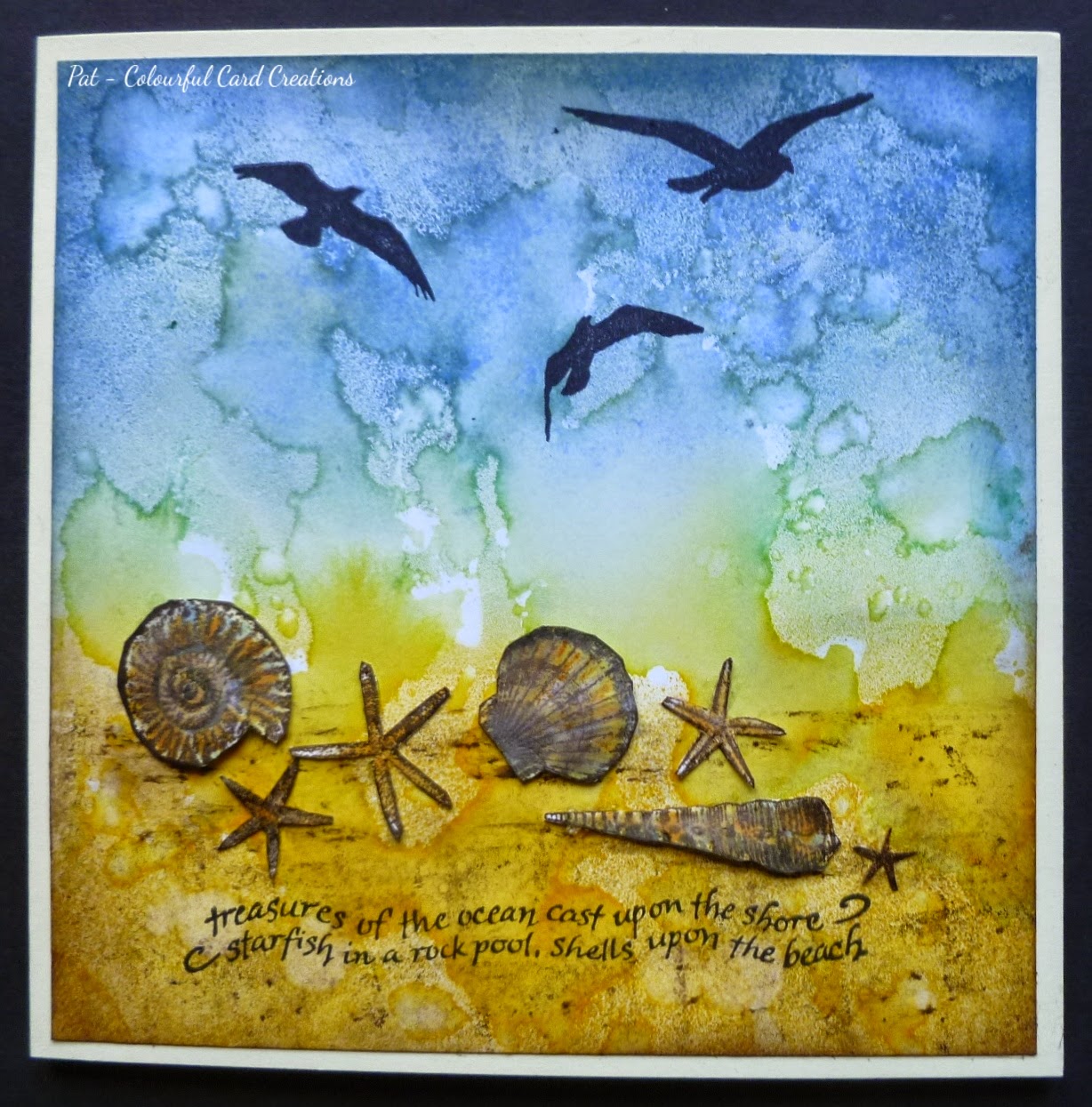 This is my sixth choice but I think it is my most successful Gelli Plate background
to date, so I hope I am forgiven for including this too.  Gelli Plate printing is very
random and I was extremely lucky with the way the colours merged together, and yes,
it's another seaside card!

Most of these are masculine makes and I do have lots of pretty feminine cards too, but I chose these because they were the most challenging but ultimately the most satisfying makes of 2014, and in the main the ones that got the most comments at the time.  I really do appreciate everyone that takes the time to stop and look.

I notice that I have a new follower who goes by the name of Grapevine but I do not have any other details.  If you let me have some more information I will give you a proper introduction.

Great selection Pat, I think the first two are my favourites, and I love the colours in the super background in the last one as well.
Jean x

I am so in awe of that perfect perspective that you achieved on the chess board card. All lovely choices but that has to be my favourite of your picks. Hugs Mrs A.

Some good choices for your favorite 5, and these were some of mine too, of your cards. I can think of lots more that would fit in this category. I've especially loved your gelli card scenes, and think you are doing such a marvelous job using that tool in your arsenal of skills. Of course I love #1 with that beautiful rose too. That's one of the most elegant cards I think I've seen. Hope your New Year has been terrif so far. TFS & Hugs

A stunning collection.
The denim and faux leather is completely fabulous and I also like the perspective achieved on the chessboard card.
Pat, wishing you all the very best in this New Year.
Lynne

Wonderful selection Pat - you do know that you're a very clever crafter don't you? Never afraid to try things and always so inspiring!

Wonderful picks! That rose just jumps out and says "pick me"! All those wonderful techniques! I need to try some of them!

Hullo there Pat,
A great creative space today, just love your cards such great work! well doen on seaside ones especially.
Thanks so much for popping over to my blog with your encouragement.
Shaz in Oz.x PS joined your blog and hope you might pop over and join mine too :D

{Shaz in Oz – my personal blog}

FAB collection of highlights Pat - LOVING all your seaside creations! THANK YOU for linking up the Our Favourite Things linky party on my blog :)

Hurrah!! You won over at Debby's :) Well done Pat,

What a collection of gorgeous cards !! I really love them all, great and differant techniques for the backgrounds, beautiful colours , great images, you really are a great Artist!!!

Beautfiul cards ... congrats on your win :)

Awesome cards, I am glad I found this site and your facebook page. Thanks for sharing

beautiful cards Pat, but I especially like your Seascape one, brilliant