Hi all.  Yes, I know, I can hear you all saying 'not another anniversary card', but I had another family anniversary to make a card for and I have seen this technique used quite a bit recently so wanted to try it out.  The equivalent word for 'bokeh' in Japanese means blur or haze and refers to a technique used in photograhy where out of focus points of light are produced by a lens, sometimes accidentally and sometimes to give a certain effect.  I know the points of light should be round but as this is an anniversary card I thought I would make them heart shaped, just a bit of artistic license.

I decided to make this a clean and simple card for the Happy Little Stampers two challenges which I am just in time to enter.  The first is Stencilling, and the second is this Sketch. 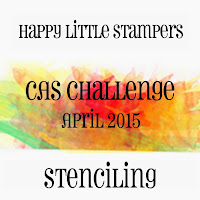 I notice that the Guest Designer Nancy Littrell over at the HLS Challenge has used this technique on her card which I think must have stuck with me and given me the idea, although I must admit it wasn't until I looked at the challenge again after I had made the card and I went back to the beginning of the month to check it out that I remembered that this was one of the places I had seen it used, so I will credit her with giving me the idea. 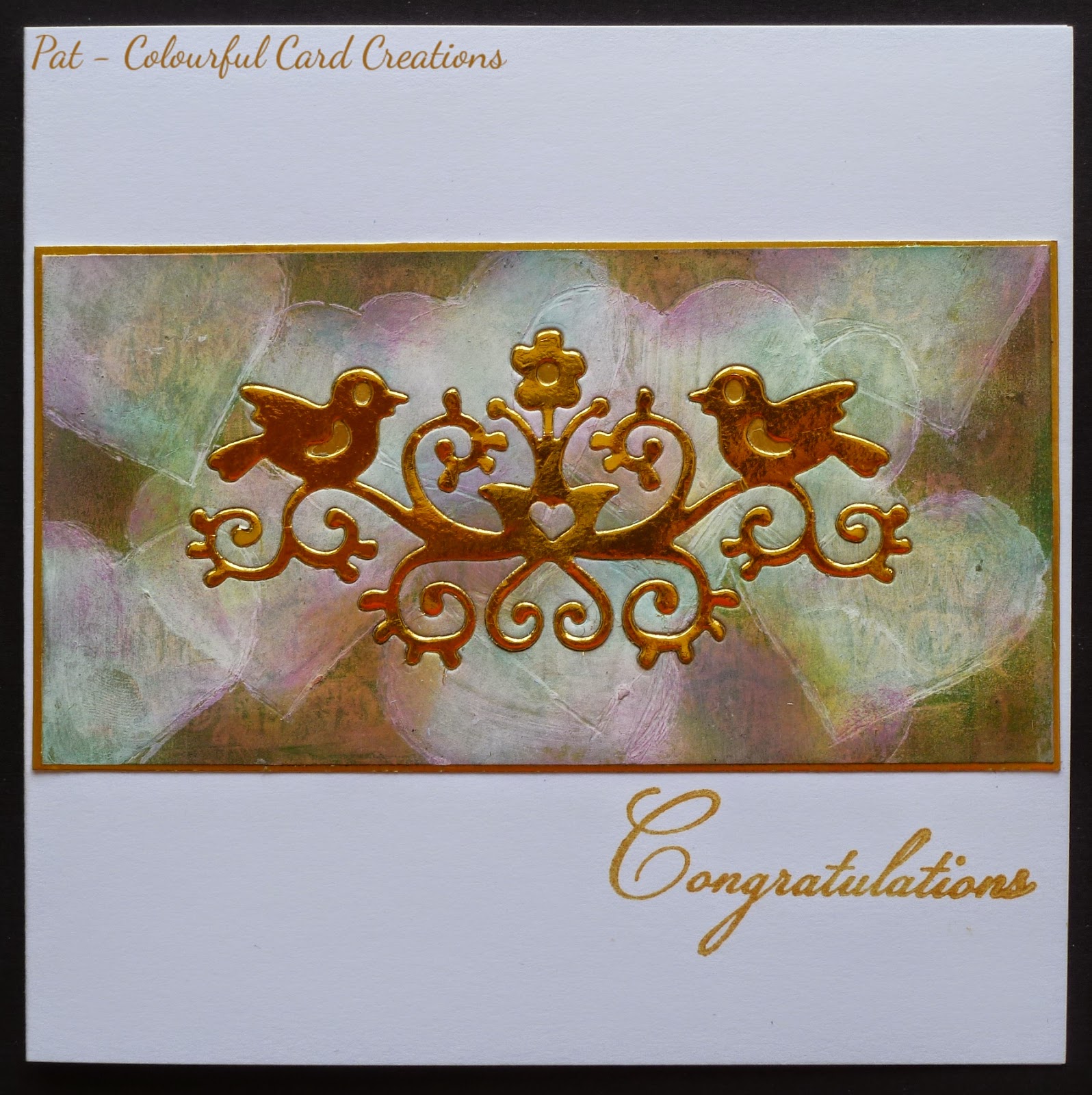 My piece of card was actually made with acrylic paints on the Gelli Plate.  I bought some cheap Docrafts paints in primary colours and used a small bit of Electric Blue and Canary Yellow straight on to the Gelli Plate and mixed it using a brayer.  I got a piece of bubble wrap and imprinted the pattern on to the wet paint and allowed it to dry.  When it was dry I used a buttermilk colour brayered over the top to refresh the paint and then using some gelli card I pulled the print. I found the gelli print colour was a bit uninspiring but I added some exra bits of Mowed Lawn and Mustard seed Distress Inks sponged on to give it a bit more punch.  I then used a stencil I made myself from a piece of acrylic and a small heart from a set by Nellie Snellen which I used on my last post and sponged white acrylic paint through it and overlapped the shapes to give a bit more depth.  I wasn't sure whether it had the right look as my paint was a bit thicker perhaps than a white pigment ink and covered the background a bit too heavily.  I then decided to add the odd bit of sponged Mowed Lawn and Picked Raspberry DI to highlight the white hearts and was happier with the finished look, although I think that the pattern from the bubble wrap can't really be seen now.

The central die cut is a Marianne Creatables die called Folklore.  I cut the first from the piece of Gelli printed card and I cut a second out of a snippet of Gold Mirri card and this one I embedded into the background card.

I finished by layering the background card on to a snippet of Gold Mirri card and stamped the sentiment using Brilliance Galaxy Gold Ink.

Such a great background you created! Makes me think I may have to invest in a gelli plate... Thanks for linking up with us at ATSM!

This is really beautiful Pat. I LOVE the bokeh hearts ... artist license indeed! :) So pretty over top of your gelli plate background. When I click on the card to see a close-up I can just make out a few of the bubbles in the background. Such pretty colours and layering. I bought two Gelli Plates a few months back, but haven't taken them out of the packages yet. Need to get on that! Thanks for playing along at Happy Little Stampers.

This is an amazing look, love the bokeh hearts and the colours you have used are lovely. Great to see you at Ink and ATSM

So elegant!! What a beautful effect using the hearts. Amazing. I also love how you decided to Make your Mark on your card. Thanks so much for playing along at Happy Little Stampers and ATSM xx

Wow Pat this is gorgeous, I love what you've done in the background. Thanks for your kind words at my blog, it's very much appreciated. It was a very difficult decision to leave CB's team but often change is good for the soul (at least for me). I will still continue to blog but maybe a little less, not sure at this point as we tend to keep busy. Thanks for your ongoing visits and comments. Hugs, Shirleyxx

What a fabulous card Pat! I adore the bokeh hearts background - very clever :) Reminds me I ought to get my Gelli plate out and have a play!

A beautiful anniversary card Pat,. The background you created looks great and I like the embeded die cut.
Jean x

Fabulous, fun and exotic - love your bokeh style.
Thanks for sharing and playing along at ATSM challenge

Have added you to the list for the prize draw :)

A very lovely card. Love the background. Thanks for playing along with us over at Inkspirational! :-)

What a gorgious anniversary card Pat, simple but very beautiful , I love your background technique as well!!
Thanks for your nice words on the CB blog and my own blog, end I invite you to come to my own blog to see my creations, yes I want to be free, I feel better that way, although I loved the stamps of CB a lot, but my English is not so good and it was difficult for me spending a lot of hours after the computer to explain everything in English a, that gave me some stress because I have olso to do other things, I love to create , but I don't love the computer so much , being 62 it's time to life the live I want !! So no stress anymore for me and my lovely hobby!!

Have a nice stamping time yourself!!
MAria

Hi Pat, what a great post and very informative. I have yet to try this technique but have seen that it is quite popular at the moment and you have explained it brilliantly along with your beautiful card xx

And the prize for most creative new idea goes to YOU, Pat! It's just from me, but I hope you don't mind! I think your heart-shaped bokeh design is brilliant! Truly genius! I have a feeling it will be CASEd again and again!! Well done!! Hugs, Darnell

Oh this is fabulous and so elegant.
luv
Debby

Pat, this is lovely! I am smitten with the touch of gold. Very pretty!
Thank you for sharing your work with us this week for the Simon Says Stamp Monday Challenge.

Gorgeous card Pat! It's so elegant and pretty.
Thanks for joining us at Simon Says Stamp Wednesday Challenge
hugs
Mandy xx

Gorgeous. Bokeh effects in photography can be heart shaped (depends on the filters you use) - and I love the effect you've created here. Thanks so much for playing along with ASM this week!