Hi all.  From never having made one I have now made my second Golden Wedding card in four months.  Both the recipients are cousins of mine whose weddings I went to and for this particular one I was a bridesmaid.  When you are fourteen you don't think you are ever going to be looking back to a wedding that happened fifty years ago ..lol.  On one of my Pinterest visits I remembered seeing a card which used acetate and had decorative panels vertically down the front and then a sentiment mat in the centre which I thought was quite attractive and has sparked my recent enthusiasm for acetate. As you can see my panels go horizontally instead of vertically.  These sorts of cards do require a nice heavy weight of acetate. 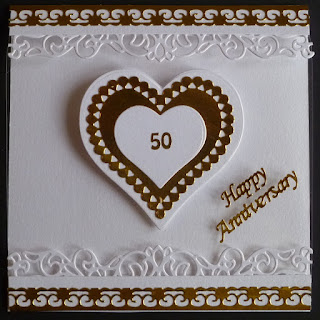 Using an A4 piece of pearlescent card I folded it in half to make a card blank and cut down to make it square with the fold at the top. I decided the width of the top border which I think was about 3/4" and cut the rest of the front of the card away.  I then cut three strips one to go at the back of the top border, just a little narrower, because if at the back it butts up to the crease the card will not close properly, and then two more strips, both of the same width as the top border, to go at the bottom. I then cut a piece of acetate the same width but just very slightly shorter than the original card front, again for easy card closure.  I cut the decorative borders using my Sue Wilson Configuration Dies and snippets of pearlescent card from the card front. I cut one length and two corners for the top and the same for the bottom. 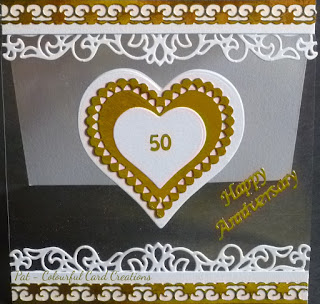 I then stuck the decorative border to the underside of the top of the card using double sided tape, then the acetate, lining it up with the bottom of the card, then the white strip to neaten the back, all stuck with double sided tape. This was obviously repeated with the bottom strips.  I then cut two hearts using my Nellie Snellen Hearts die set and more snippets of pearlescent card, one for the front, and after attaching, one to neaten the back.  I then cut a decorative heart from a snippet of gold mirri card and finally another smaller plain heart using another snippet of white pearlescent card.  I then cut two Nellie Snellen Multi Frame Borders 3 dies to go top and bottom using snippets of gold mirri card.  This particular design has little pointed bits on the edge which I didn't particularly like on this card so I cut them off before adhering to the borders.

I  used gold numbers and a gold sentiment to finish the front and I ran a greeting off the computer and cut it out using a large Nellie Snellen die from the same set which I stuck to the back of the card.

I was very pleased with how this turned out as it was a complicated card to make which I had to think about very carefully before starting and whilst assembling, and I think the back looks just as neat and tidy as the front which I feel is essential with acetate as whatever you use to glue it, in this case double sided tape, can look messy from the back.  This is definitely a one off as a special card for a special occasion.

I hope you have found this description of some use but if totally bored and nearly dozing off I hope you liked looking at the photos anyway .lol ..haha. (I have just seen on another blog post, Darnell for the many that know her, that lol is now out of favour and haha is now back in again, so not to be considered uncool I have changed my text .haha/lol ..or whatever (laugh)).

Pixie's Crafty Workshop - Week 190 where we us up our snippets of card, paper ribbon etc.
Simply Create Too - No. 92 Anything Goes.
Vintage Stamping Challenge - No. 35 Anything Goes.  Although they have vintage in their title they do say that your cards do not have to be vintage in design.

Beautiful card for a Golden Anniversary! I have those heart dies sitting in my stash, they are pretty. The lacey border is beautiful. Take care, Shirleyxx

Oh Pat this card is gorgeous. It's just perfect for a Golden Wedding Anniversary. I really must have a go at an acetate card. Barbxx

Wow Pat, a really stunning card - perfect for the occasion and your instructions are a delight to follow! I'll be trying this out just as soon as I can find enough time - super work!

What a well planned and perfectly made card, Pat!!!! For such a special couple who's bridesmaid you've been!!! WOW!!! Love the delicate borders at the top and bottom and the beautiful heart!!! The acetate is such a wonderful idea and looks lovely!!! Beautiful, Pat and thanks for explaining how you did it - might just give something like this a try some time!!!!
Have a wonderful day!!!!

Oh my! It wasn't until I looked at the 2nd photo, that I could really appreciate the acetate usage. Pat, this is just brilliant designing, and so very beautiful. The gold gleams so nicely, and celebrates this wonderful occasion in such a lovely way. I enjoyed reading the how-to's, and really admire your skill in re-creating in your own way, something from Pinterest. I doubt it could have been even close to as beautiful as your creation. It's so stunning. TFS the tip about LOL! I'll have to remember that. Our Darnell...what inspiration! TFS & Hugs. Happy wkend.

Congratulations on being one of Di's picks today. This really is a lovely card. Barbxx

Beautiful card, so elegant, the recipients will LOVE it, Cathy x

This is such an elegant and very clever card! The recipients loved it for sure!