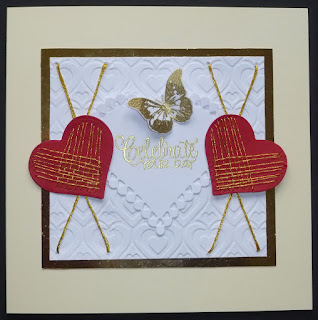 I love all things with hearts, Pat, so I adore your pretty design - what a special card for an anniversary! Thanks for joining us at the Simon Says Stamp Wednesday challenge!

Morning Pat, Congratulations on your two year blogging anniversary. You're way ahead of me! Your Anniversary card it lovely and I enjoyed reading about how you made it. What a shame the embossing folder is no longer available. It really is very pretty. Barbxx

Super card Pat - I love how you incorporated the gold thread! And well done on reaching two years with you blog.

Well have finally landed back in my own bed for a week or so, so am calling round everyone! Like this very much Pat! Why don't you come and join us at Stamping Sensations for our Sewing challenge? x

Congratulations on passing your 2nd Yr. Blogging does become addictive. I have met some lovely people over the years.
I love your card and your take on the theme. The gold sparkly thread looks lovely. Thankyou for fluttering by #38. Hugs Mrs A.

A wonderful anniversary card Pat, I like the stitched hearts and the gold butterfly is lovely.
Jean x

Congratulations on passing your two year blogging anniversary. You're so right about blogging being a great crafting community. xx

So pretty, and congratulations on the 2 yr anniversary. I can remember when you were just starting this fab blog with sharing your gorgeous cards. I love this one, probably a lot of its attraction for me is the embroidery threads - used with such imagination. The gold glitter is wonderful against the red hearts and then again as Xstitch holders behind the hearts. The embossing pattern is so pretty & the delicate scallops on the white central heart put me in mind of the antique hankies. Just so very unique & lovely, and meets the Butterfly challenge perfectly with the tiny gold one hovering. I'm so happy you discovered blogging and that I found your blog! TFS & Hugs

Beautiful. I love the thread on the hearts

This is a super creation Pat and your choice of colours works really well against the embossed background.

Many thanks for joining in at Stamping Sensations this month.

Beautiful design Pat, I also love the colours. I've also scrolled down to see other beauties that I've missed. I know what you mean about time passing by. It's been 4 years since I've started blogging... hard to believe It's great fun, but I haven't had as much time for it this year. Take good care, Shirleyxx

Glad you popped this onto the Stamping Sensations Challenge Blog Pat! Thanks for joining in. x

So nicely done! I used to love stitching on cards with thread...
Haven't done it for a while not...I think you may have inspired me...

This is positively stunning, Pat!! I'm sure it will be a winner!! Speaking of winning .. could you please email me about your prize? darnell dot knauss at gmail dot com. Thank you! Hugs, Darnell

A gorgeous card, Pat! great stitching and textures! Thanks so much for sharing it with us at Stamping Sensations for our Sew Special theme. Good luck!