Hi there.  I have an anniversary card to show you today so have interrupted my Christmas cards to make this, unfortunately still a lot of Christmas cards to make but never mind.  I adore poppies and I have a new/NBUS Memory Box die called Row of Poppies which I thought I would use for this card and I included a butterfly and four little hearts so it would qualify for Mrs A's Butterfly Challenge but I miscalculated and unfortunately it closed last Wednesday when I thought it was open until next Wednesday.  It just goes to show that time passes a lot quicker than I think!  Anyway, here it. 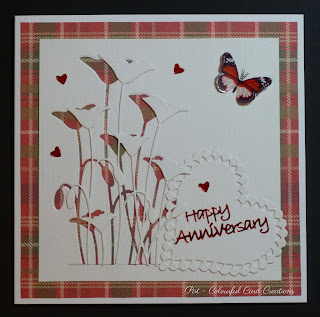 I lined my white square card with a piece of red tartan paper which I love, and then using some linen look card cut about an inch smaller all round, I cut the Memory Box die out of the left hand side.  I then stuck the white card down and placed the die cut poppies into the negative shape and stuck down all the extra little pieces which form the negative shape and then lifted the poppies themselves away when the glue was dry to leave the shape exposing the pretty red paper.

I then cut a heart using my Nellie Snellen Multi Frame Heart dies and stuck the sentiment to the heart as you can see with the heart on its side.  I found some little sticker hearts and coloured them to match my sentiment, and after sticking the die cut heart next to the poppy shape I added the four little hearts randomly around the card and sticking one on the heart itself.  I was going to leave the card there but then decided to make a sort of shadow effect with the positive piece of the poppy by placing it just a little to the right and draping it over the heart just a little which I think works quite well.  I finally added the little butterfly.

On to another topic briefly.  I in common I'm sure with a lot of other people have been doing a bit of colouring.  The colouring books have become so popular over the last six months or so and in July when I went away on holiday I thought I would buy one to have a go at whilst away.  I bought one called Relax With Art which comes out once a month I think and has a facebook page which you will find here.   I like it because the outlines are not thick and heavy and the pictures are not produced back to back so that if you do use markers or press a bit heavy with pencils it wont spoil anything.  I have used just colouring pencils so far but personally if I did use markers I think I would still put something in between the pages to be sure that no stray ink spoils anything.  I only get time to do it occasionally and have totally completed just two images so far and thought perhaps you might like to see them. 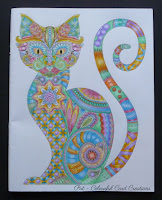 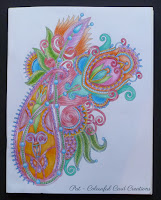 Thank you for looking at the blog today.

Pixie's Crafty Workshop - Week 206 where we use up our snippets of card and paper etc.
Shopping Our Stash - No Stamping.  (I'm so excited that this card made the top 3)
Beccy's Place - A card or Papercraft  Project.

I love tartan too Pat, and I also love poppies, so your card really appeals to me. You've done a wonderful job putting it all together. Sorry you missed the challenge deadline, but at least you have a gorgeous card, which I'm sure will be well received.
Your two colouring pages are fabulous, you did a great job on them. I've seen colouring books all over the place here, but I haven't purchased one yet... thanks for the tip about the Relax with Art books.
Cheers,
Beccy

Hi Pat, Beautiful and elegant card, I love how you've used both the negative and positive of the poppy die. (I own that one too). Thanks for stopping in at my blog for the 'tour'. Have a great week, Shirleyxx

LOVE this card Pat - and really clever use of the die with the wonderful tartan as well. I read your directions a couple of times (it's the pain killers I think) and think I've picked up how and why you used the die when attaching the white poppies. A lovely result.

And thanks so much for the info. about Relax with Art - your colouring pages look amazing! I've always wondered about the way one would get round using alcohol markers so it's good to read about a product which is just printed on the one side - although I agree that a piece of paper underneath the page would be prudent just in case there's any bleed through which just might take a fancy to the following page :)

I love tartan and poppies and butterflies so I'm stroking the screen as we speak. lol. Your colourings are gorgeous. Very theraputic i would imagine. hugs The curret challenge is all kinds of fairies and runs right until 29th Dec. hugs Mrs A.

Your work is beautiful, Pat, both your cards and your coloring! I am always envious of folks who can color...I can't, so I am thankful for designer papers. Thanks so much for sharing these beauties with us here at Shopping Our Stash!
Hugz,
Chana, DT

oh what a lovely card! perfect take on our "no stamping" theme at SHOPPING OUR STASH! ♥

Gorgeous work as always Pat. Beautiful coloring. I tell you. The time is passing so fast I have been wishing everyone happy Monday today!!! lol!
Take care, Flo xx

I love the popped-out poppy dies! What a great idea to have the background paper color them. And adding the white poppies over the panel is just an added bonus.

Thanks for joining us at Shopping Our Stash!

Hello Pat, I love you poppu and butterflies card. It's a beautiful layout. What a shame you missed the challenge. Your colouring looks beautiful. I imagine there is a lot of work in each picture. I have several friends who colour now and find it very relaxing. Barbxx

WOW!!! I love the card, brilliant idea with the shading, I adore tartan, and have used quite a bit in my cards recently. The two coloured art images you added are also fabulous, the colours are superb, this is a craze that will last a long time I hope, as the results are brilliant!