Hi all.  I have made this card for some good friends whose 26th anniversary is soon.  I thought I would try to do a theme which fitted in with some challenges at the same time.  The first is Mrs A's Butterfly Challenge which closes tomorrow so must get a move on.

Darnell of djkardkreations has a NBUS challenge, her sixth actually.  In case you don't know NBUS stands for Never Before Used Schtuff so out comes anything new or old maybe that hasn't been used before and I'm sure we all have some of those.  She is giving away some really generous prizes too, so thank you Darnell!

I used a NBUS set of dies which I bought recently, another from Sue Wilson called Heart of Hearts.  I also used another set from Sue Wilson which is one of her Configurations dies called Elegant Lace Edger.  The last die yet another Sue Wilson die is another NBUS and is a nice large Congratulations sentiment die. 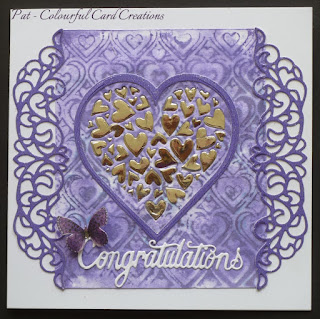 I made the background using a Cuttlebug Embossing Folder called Kimmy-Luvs which unfortunately isn't available any more.  I used the embossing folder inking techique which means just inking up the inside of the embossing folder.  I smooshed the Memento Grape Jelly ink over the piece of card  first for background colour,  and then I layed the folder out flat and ran my ink pad over the inside of the front of the folder and placed my card over and rubbed it really firmly to transfer the ink to the card.

I then cut the heart die into the patterned background and after adhering this layer to the card I replaced all the original hearts with silver mirri ones.  I met say that I backed the silver mirri with 'Stick It' adhesive so that they would just stick straight into place without using a lot of messy glue, but the only problem was that a lot of them fell out of place so it was a bit like piecing a jigsaw together and took quite a bit of time to find the correct places for them. and some of the hearts were extremely small which proved a trifle fiddly.

I then cut a frame from the same snippet of purple glitter card using the two different sized heart dies, which I placed round the inset hearts and finished with the sentiment which I cut from a snippet of white card and glued into place.  I found a butterfly topper from my stash which was a good colour match and nice and small to fit on the top of the 'C' on the sentiment, and I just added some clear Wink of Stella to give it a nice glittery finish.

Thank you for visiting my blog today which is greatly appreciated.

Pixie's Crafty Workshop - Week 219 where we use up our snippets of paper and card etc.

Oh Pat this is really beautiful and you remind me I have this hearts die by IO .. have used it though :D
Thanks so much for sharing.
Shaz in Oz.x

Wow Pat, a really beautiful card. Love all the dies and how well you used them together!

Thank you for coming to play in the Snippets Playground :)

I admire your patience with al those little sticky hearts. a much netter way of putting them in pace instead of gluing. I love your glitter panels on the sides and how you have the butterfly just resting at the start of the sentiment. Thankyou for fluttering by my challenge where your card will be entered twice into the draw. Hugs Mrs A.

Hi Pat! Yup, I was quick off the mark commenting this morning - have added your name to the 'dies as a prize' list :)

This is very pretty Pat, the colour is lovely and so are all the dies you used.
Jean x

What a beautiful anniversary card in purple and white with lovely little gold hearts, Pat!!!! Such a great Lace Edger Die to frame your heart so wonderfully!!!! The little gold hearts are so lovely it was definitely worth all the effort to stick it down!!! Love the font of the sentiment die - goes beautifully with the rest of the elegant card!!!!
Have a wonderful day!!!!
Hugz

Beautiful and elegant card Pat. Your friends are going to love this! I love that embossing folder stamping technique too ... makes such beautiful backgrounds (I'm all about the backgrounds!), and also a great way to use embossing folders in a whole new way. :) xx

Gorgous card, love these diecuts and the colour!