Hi all.  Now, seahorses and anniversary cards at first glance don't really seem to go together, but I had the idea that the bubbles rising from the seahorses mouths should be heart shaped.  I have two new sets of stamps from Chocolate Baroque called Steampunk Funky Fish and Steampunk Sea World.  I have to say the steampunk thing is a slight departure for me but I thought the stamps were interesting and just a little bit different and will make good cards for the men in our lives who are never that easy to make for. 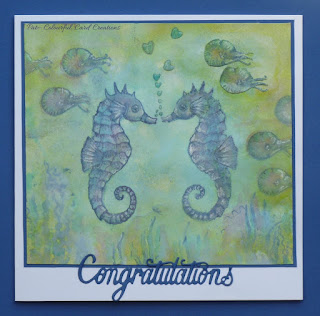 I used the gelli plate to make a background using a snippet of white card and Distress Inks in Faded Jeans, Peacock Feathers and Adirondack Lettuce.  I applied them randomly to the gelli plate and sprayed with some water and mixed them around a little before pulling the print.  I then cut the background down and added in the bit of greenery in a very washy way, and some small Nautilus which I think are so cute, stamping with tthe Faded Jeans and added a little Peacock Feathers and Victorian Velvet.  I added the heart shaped bubbles by hand and then coloured with the Peacock Feathers ink.

There is a large and a small seahorse in the set and I needed two of the large sized ones so I used my gelli plate to make a mirror image by inking the stamp with the Faded Jeans and stamping on to the gelli plate.   I place the gelli plate on to a piece of card which it tends to stick to and then you can turn it over quite easily to stamp it on the card.  The image does come out slightly less defined but on the whole works well  I coloured them with the two blues and the pink.

The photos I took of the card showed up a mark where I must have overwet it and it had puckered and I had ummed and aahed about whether it was acceptible, but I decided to cut two more of the Nautilus from a snippet of white card and coloured to match the ones stamped in the background and placed them strategically ...lol.   I would say the colours were a little brighter in real life than in the photo.

Pixie's Crafty Workshop - Week 233 where we use up our snippets of card and paper etc.
Chocolate Baroque Challenge - No 23.  It is always a colour challenge.  I have used the colours if somewhat watered down so hope this is acceptable. 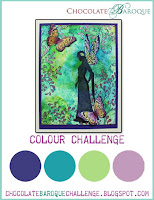 Fantastic card for an anniversary with a beautiful Gelli print background. I use Steampunk images for 'man cards' it works well as you say. Have a wonderful day xx

Oh Pat, this is absolutely beautiful! Really soft yet perfect for a chap as you say - I adore sea horses!

I corrected your link easily - spotted right away that somehoe there was an extra L at the very end of the link URL (it ended in HTMLL instead of HTML), I have no idea how that could have happened but it's all fixed and working fine now.

Fabulous use of the gelli plate, making this a really lovely card design. Thank you for entering the Chocolate Baroque Challenge and good luck xx

A super card Pat, great mirroring of the main image, and the heart bubbles are so cute. A fabulous underwater scene, and the dark matting pulls it all together. Thanks for your entry into the Chocolate Baroque Challenge, Judith xx

This is way cool, and your mirror technique is brilliant. Also loving your gelli created background. This is a perfect look for a guy card, and you've created the 'water feel' of this most effectively. Enjoy reading about how you do this, nearly as much as seeing the pretty results. (This does not look grunge to me at all! But I know what you're saying). A great masculine card, but equally fit for anyone who just enjoys a water or marine interest. Well done! TFS &Hugs

Beautiful! Great job with those colours, Pat. And by pairing them with the nautical stamps you've created a stunning masculine card. LOVE it! Thank you for playing along with us in Chocolate Baroque’s Colour Challenge. hugs, Asha

Oh, WOW, your underwater scene is so beautiful, Pat!!!! Very neat stamping using the gelli plate and the little heart bubbles are so cute!!!! Wonderful use of colour, too!!! Such a great masculine card!!!!
Have a great day!!!
Hugz

great idea to make a pair of seahorses, love the misty underwater look too.
Thanks for lpaying with the Chocoolate Baroque challenge
Veronica

Lovely card Pat. Great stamping and colouring and use of the Gelli Plate - brilliant. I have just started to play with mine. Good luck with the Chocolate Baroque Challenge, Anne x.

Love you under the sea card especially those fabulous seahorse.
luv
Debby