Hello everybody.  I have been having a very busy time lately and my cardmaking has been a bit fragmented, and all the posts so far this year have been draft posts done well before Christmas and which just never got shown.  I was determined though to try and get my act together to enter LIM, CAS Mix Up Challenge, and together with the second card Darnell's new Twofer Challenge.  I only had the purple feathers ready and so missed the LIM deadline as obviously I needed the second card ready as well, but two out of three is OK, like they used to say on school reports...could do better..lol.  Darnell's Twofer Challenge is one you need to get your head round, using the same stamp/die for two cards for different occasions, and this has proved to be a hit and I am so pleased for Darnell.  Here are the two cards: 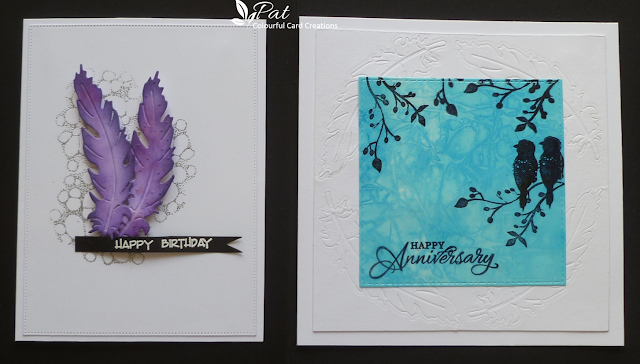 These two cards are for Twofer Card Challenge - No. 1 Feathers.

I have had this freebie feather die for a year or two and have only ever used it once so thought of that straight away.  I have to be honest and say that mainly I make just birthday, anniversary and Christmas cards so thought the two cards would be a birthday and an anniversary card.  This first one I decided to make purple to go with the LIM Challenge which sadly I missed, and I started by colouring a snippet of white card with some purple brushos, sprinkling them on and spritzing, and when dry die cut the two feathers.  I decided they were a bit pale so I added some Distress Ink in Shaded Lilac, and then round the edges some Adirondack Eggplant.   I cut a mat using a Crealies Pierced Rectangle die and another snippet of white card, then added some interest to this layer with a Texture Fragments stamp from a recently acquired set from Chocolate Baroque.  I heat embossed it using Versamark Ink and WOW Silver Metallic Embossing Powder.  It is quite a small stamp so I stamped it three times to form the background shape, and then I mounted this layer on to the white rectangular base card.  I added the two feathers giving them dimension by adhering them using Mounting Foam Tape and finished with a black snippet for the sentiment banner and heat embossed the sentiment using the Versamark and WOW Opaque White EP. 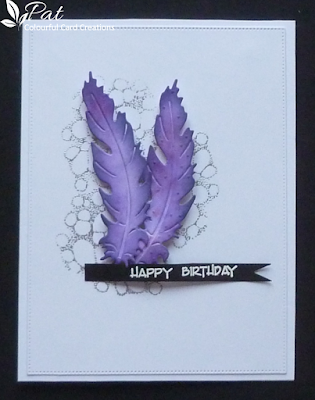 Pixie's Crafty Workshop - Weeks 317/318 where we use our snippets of card and paper etc.
Happy Little Stampers January Anything Goes with Dies Challenge.
Simon Says Monday Challenge - Birds of a Feather.


The second card took me a while to think what I could do with this feather die so I could make it look substantially different from the first.  I decided to dry emboss the feather across each corner of the square white base card.  This worked reasonably well but unfortunately in a couple of place it cut through so I cut the front off the card and then mounted this on to another card to give it a base layer and decided that it looked OK like that, just made sure that I put pieces of tape behind the cuts.  I then decided to use a set of stamps by Creative Expression called Rustic Birds, so as well as the feather background I thought this would work with the Twofer as I am sticking with the feathers theme, and I thought the two birds side by side on the branch would make a nice anniversary card.   I made a square background for the silhouette birds using a piece of glossy card and a stitched die from The Works, and sprinkled Turquoise Brusho Powder then spritzed with spray starch and and also a bit of water as it was a bit too grainy and I wanted a reasonably smooth finish.  Whilst wet I covered this in cling film which gives the finished piece that pretty pattern.  I left it to dry for about an hour before removing the cling film.  I am not totally sure exactly what the spray starch does, apart from the fact that it has more body to it than just water and maybe that assists it sticking to the card and makes the cling film work better, but I intend this card for the CAS Mix Up Challenge and it was the technique for this time so gave it a try.  There will be videos you can watch about this type of technique and the links will be on the blog.   I made the little silhouette scene on this using the smallest bird and one of the leafy branches,  and added the sentiment, stamping with Black Archival Ink. 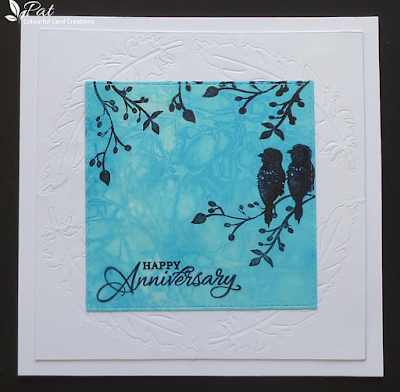 I hope you have managed to stay the course with this rather lengthy post, and thank you for visiting today and I'll see you again soon.