Hi there everyone.  I know this is a little late for showing as Valentine's Day was nearly a month ago and had written the post but just hadn't got around to showing it.   DH and I  have kept most of the cards we have sent to one another over the years, but after nearly 36 years we are beginning to run out of places to keep them now...lol.  I would love to know how many of you do the same.

I will be blogging one or two previously made cards which I have in draft over the next two weeks or so.  I have been rehearsing a show by Gilbert and Sullivan called Ruddigore and we have seven performances over the next two weeks.  I used to do shows regularly when I was a lot younger and thought nothing of it, but these days I find it is a bit more tiring.  In fact it is thirty five years since I did my last show, although I do belong to two choirs, and a concert party group I perform with in the summer.  A  friend twisted my arm to get involved as they needed more singers in the chorus, and I have to say I have found it good fun, and the first performance is on Wednesday, and the last is towards the end of March, and then it quietens down somewhat.  I am still hoping to enter a few of my regular challenges before the end of the month, but please forgive me if for one reason or another this doesn't happen.

Anyway, enough chatter, on to the card.  This is what I call a 'neat but not gaudy' card..lol, in other words quite CAS, using this pretty heart which has had two or three outings over recent weeks. 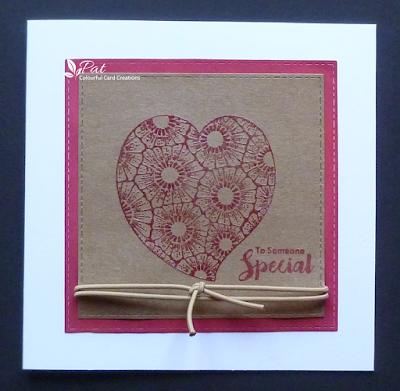 I used a Chocolate Baroque stamp from the set called Fluttering Hearts and stamped it on to a snippet of kraft card using Adirondack Cranberry ink and heat embossed it using WOW Clear Gloss Embossing Powder.  I then die cut this with a square stitched die from The Works.

I decided to put another layer behind this before mounting it on to the 6" square white base card, and to tie the colours together I die cut the next size of square from another snippet of white card, and using blending foam coloured about an inch all round the edge of this square using the Cranberry ink and mounted the topper on to it.

I stamped the sentiment on to the topper again using the same Cranberry ink, and heat embossed with the Clear Gloss EP, and to add some extra interest I found a piece of elasticated twine which I think was wrapped around something and which I kept for just such an occasion as this, and cut two pieces which were stuck at the back of the topper with double sided tape before adhering it to the base card.

Pixie's Crafty Workshop - No. 321 where we use up our snippets of card, paper etc.
Happy Little Stampers March Anything Goes with Dies Challenge.
Addicted to Stamps and More Challenge - No. 282 Make Your Mark.
613 Avenue Create Challenge - No. 207 Anything Goes/Optional Twist Reuse/Upcycle (my piece of elastic twine is upcycled).

Love this heart on the Kraft background Pat. Lovely. x

Beautiful card Pat, I love the heart image and the lovely colours.
I too keep all my cards from Alistair and from my Son. I'm running out of space for them too.
Gosh you are really busy with your singing. The Gilbert and Sullivan does sound fun.
We are doing a Scratch Messiah in a couple of weeks, and the Choral is the lead choir, then in April it's our Spring concert, it's all go, Kate x

What a talented lady your are, hope all goes well with the shows....Gorgeous card, love the pretty stamp and the cranberry on the kraft looks gorgeous x

Very pretty V-Day card Pat! The image is gorgeous and I love it with cranberry and white framing. Great idea to colour the cranberry frame with your matching ink.

How exciting to be in the choir of a play. You are multi-talented, my friend!!

Hubby and I also keep all our V-Day cards and Anniversary cards since we've been married ... 39 years! :) My drawer of my night stand is overflowing. :) xx

Lovely card, Pat, the pink goes so well with the Kraft card. Good luck with your shows, they sound like fun. xx

A lovely CAS design Pat my friend! Love the combination of kraft and white card-stock together like that! Great! Have a lovely day! Love & Hugs. Hazel xx
My Card Attic

This is so pretty and I like the interior pattern on the heart. With the kraft, the cranberry shows off so nicely. Love how you've framed it too, It's CAS, but with lots of style. Have fun doing your choral groups and shows. Wish I could come enjoy seeing your performance. We'll all be here when you get back (comments still not coming in my email, which is why I was late getting round to visit here!) TFS & Hugs

Good luck with your shows ad enjoy your singing time! :d
Your CAS card is delightful, great design! Love the colours combo and that pattern inside the heart!

Your snippets card is awesome, Pat! The pattern on the heart is amazing!! Have a great time with the performance! It sounds like you are having a blast!! Hugs, Darnell