Hi there everybody.  I have two rather late entries for a couple of challenges which I like to enter every month if I can.  Due to my week away and the hot weather which has slowed me down somewhat, I am rather late with these so I have decided to show them both in one post.  The first is for the CAS Watercolour Challenge and the techique to use this time is Splash Watercolouring.  I have used a 3D embossing folder which I bought a while ago and am only just getting around to using, which is by Sheena Douglass called Trailing Time. 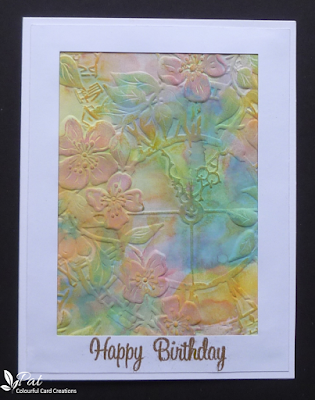 I embossed the folder using a piece of white card and then used this watercolouring technique, a video for which you will find over at the challenge.  The colours I used were Worn Lipstick, Squeezed Lemonade, Salty Ocean and Wild Honey Distress Oxide Inks.  I did want the blue over the clock face which I managed to do fairly well, and then I added some extra colour over certain areas to strengthen the look using the same inks, i.e pink on the flowers and some honey colour over the bits of clock face, and I mixed the yellow with the blue to make a green shade to add to the leaves.  The colours won't look true but I felt it bought out some of the lovely deep embossing.  I finished by framing the piece with white card and added the gold embossed sentiment using WOW Metallic Gold Embossing Powder.

The second card  is for the CAS Mix Up Challenge which asks us to colour our die cuts, use stamping and a techique of our choice.  The die is a little turtle which I got from The Range. 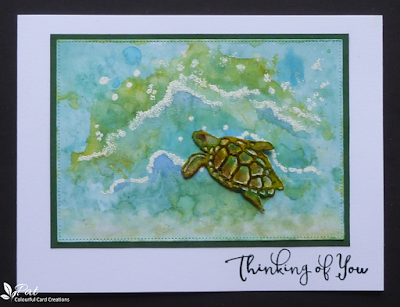 I used the piece of card which was left over after die cutting the frame above and I coloured it with some Distress Inks in Peacock Feathers, Cracked Pistachio and Fossilized Amber and also Salty Ocean Oxide ink using the same watercolouring technique as above.  I also decided to make some waves which I heat embossed using WOW Opaque Bright White EP using a Versamark pen.  I also did a bit of water bleaching, especially at the bottom which I hope looks a bit like the water's edge.  I then die cut the turtle from a piece of white card and backed it with another piece because I wanted the shell without the die cut holes, and actually it has given it a more ridged look.  I then coloured it using the Peacock Feathers and Cracked Pistachio plus some Ground Espresso, using a waterbrush.   I finished by adding a dark green background layer and added the turtle using some Pinflair Glue Gel for dimension.  I then added the sentiment using Adirondack Bottle Ink.

I would like to have entered the CAS Christmas and Darnell's Twofer Challenge as well, but I know that with a busy time coming up I probably won't manage them as they end on Tuesday.  Do go take a look and maybe enter yourselves if you have some time over the weekend.  Whatever you are doing I hope you have an enjoyable one and I'll see you again soon.

Both your cards are so pretty and filled with beautiful textures and interests. They both need to be touched! TFS your cards with us at CAS Mix Up and CAS Watercolour, Pat. Hugs...

Two amazing cards Pat! LOVE the gorgeous embossed design ... great job keeping the colours in the right areas. Not always easy with the splash technique. The colours blended so beautifully and are perfect for summer. Your turtle is AMAZING!! I LOVE the splashed background with your added waves and bleached sand area. And the colours of the turtle are perfect. So happy you had time to play along with us at CAS Watercolour and CAS Mix Up! xx

I think it’s safe to say Pat, that this hot weather has slowed us all down. I keep thinking that I’ll go and create something then I walk into my craft room and the heat just hits me. It’s only a very small room and it gets the sun throughout the day, so it’s like a greenhouse! Your cards are beautiful. I really like the blend of colours on the first on and the subtle embossing in the background. The second one is a beauty too. I love the colours that you’ve used and the little Turtle really does stand proud. Your water bleaching looks great. I use actual bleach quite a lot when I’m crafting and I really like the effect that it gives, especially on water scenes. Wishing you a very happy and colourful weekend Pat. Crafty hugs, Sandra x

So glad you found time to enter the two challenges Pat, with these wonderful cards. The colours you've used and the 3D embossing folder (on the first card) and the splash technique has produced one amazing and beautiful card. The effect is absolutely gorgeous. The second card is so unique and love how you've mixed the medias. The waves look great, the background and waters edge are stunning and that's one cute turtle. Your card brought back memories for me of seeing These wonderful creatures in the wild, in Ascension Island (RAF days) many years ago, so thank you for that x Great addition to the gallery Pat and thank you for joining in the CAS Mix UP Challenge x.

2 gorgeous cards Pat, I love the soft colours in the 1st one, and your turtle card look amazing. Love the background and how you've done the waves. Your turtle is coloured beautifully too, Cathy x

Absolutely beautiful cards Pat, love the colours and designs. The 3D folder is so very effective,and the turtle is so cute.
The hot weather has been marvellous, but so very tiring, so I've been slow too, Kate x x

Two beautiful cards, Pat! Love the splashed pastel shades and the deep embossing of the first card! The turtle on the second card is amazing! Your splashed water scene looks like a lovely pool for the turtle to swim in! Thanks so much for sharing this with us at CAS Watercolour and CAS Mix Up!

First, before I forget, thank you for the sweet shout out for Twofer! I understand that you won't always be able to play and that was sweet of you to encourage other people! You did a great job with these beautiful watercolor designs! I love the colors on that super dimensional floral card and, oh, my, the ocean for that awesome turtle is just divine! I sure hope the heat ends for you soon!! Hugs, Darnell

super cards mf...love the bkg of the turtle card, amazing looking.
Thanks so much for joining us at the CAS Watercolour Challenge!
:) Karen

Both of these backgrounds are fantastic. The 3d folder is lovely and added such great dimension to the soft smooshing colors. #2 is equally wonderful, loved all the 'sea detail effects' as you certainly got a lot of movement with the waves. What is a big Wow, though, is the super effects on the turtle. It's a marvelous patina'd look. I've seen sea turtles and some of them do have this 'golden green' color. Well done! TFS &Hugs

Two beautiful cards, Pat. My favourite is the first one, I love the effect of the embossed watercoloured panel.