Hi everyone.  This is the last of the cards I made using the new stamps shown on Hochanda last month.  I've started with the cute and fun gnomes from the set called A Tomte Christmas which comes with some great sentiments too. 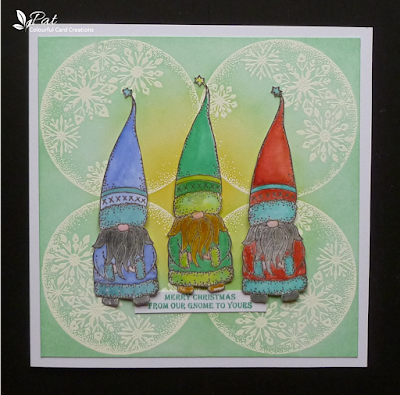 I next made the background using another of the new sets called Shaded Baubles using the circle with the pretty snowflakes around the edge and stamped it four times using Versamark ink and then heat embossed with WOW Opaque Bright White EP.  I then inked it up with Cracked Pistachio Distress Ink around the outside and some Adirondack Sunshine Yellow in the centre.   I finished by stamping one of the sentiments in Lucky Clover DI and heat embossed with the Clear Gloss EP and put it together adhering the gnomes with Pinflair Glue Gel to give them some dimension. 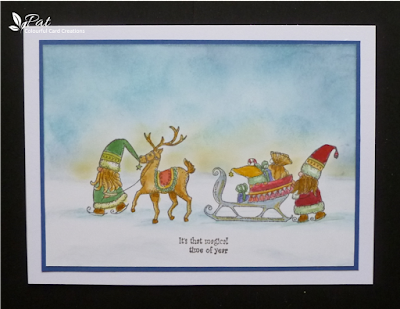 This second card was made again using the set of gnomes, this time two of the smaller images.  I stamped the images on to a piece of white card using Versafine Smokey Gray ink and then added the sentiment.  I then got a selection of Distress Inks, and coloured using a waterbrush and to vary the colours a bit I mixed some of the inks together to get some different shades of the colours.  When I had finished colouring I ink blended the sky again using Distress Inks - Broken China and Stormy Sky and then added Fossilised Amber at the horizon.  I didn't want too smooth a blend so the sky has some variation a little like clouds.   I then used some of the same blue inks to ground the images and make some tracks in the snow.  I backed it with some blue card and mounted it on a white base card. 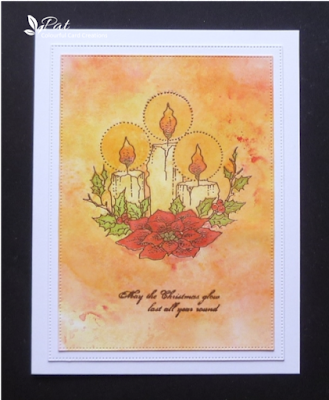 For this last card I used the pretty candles from the  Christmas Circles set and heat embossed the image using WOW Metallic Copper Embossing Powder.  I then sprinkled some Orange, Lemon and Scarlet Brushos on to my glass mat and spritzed with water before laying the card into it.  I did this several times until I had covered the card.  I then coloured the image with the same colour Brushos and also Leaf Green and to whiten the candles I bleached them using water.  I then die cut the image using my Crealies Pierced Rectangle die and then die cut a white mat using one of the dies just a bit larger, and at this stage added one of the sentiments from the Christmas Garden set using Versafine Vintage Sepia ink.   I then mounted it all up on to a white base card.

OMG those gnomes are adorable, I love them :)

What marvellous cards Pat, I love them all and your designs and colouring are fabulous.
I love the colours you've chosen and your colouring with the DI is super, I never think to use them for that, I tend to go straight to water colours, so thanks for the inspiration. All three cards have super inked backgrounds, hope youare having a lovely Sunday, Kate x

Wonderful cards, I love gnomes although I do not have them in my posession :) Beautiful backgrounds on the cards and the third is glowing!
I am sorry translation is not so wonderful, I know. We are not moving, but the floor is being renovated, we have to vacate the whole livingroom and kitchen and will have wood ceramic tiles. A lot of work! But worth it.

Superb cards Pat and I have to say that those little gnomes make me smile every time I see them, they're so cute. Great layout, stamping and colouring on all of your cards and I really like your colour choices. You really do a fabulous job with the CB stamps Pat x

WOWser! Loving both cards with gnomes on and the elegance of your third

It no good I have just seen this gnome on another blog and am just going to have him for myself. Love your trio. Hugs Mrs A.

LOVE your gnome cards, they remind me so much of a surprise trip to Iceland last November, where the shops were full of them. Your beautiful candle card is so elegant. xx

So love the first card with those wonderful gnomes and what a fabulous sentiment too x. The stamped little gnomes on the second is fabulous x. The combination of the brusho's, the metallic and that beautiful image on card number three is absolutely stunning x.

Beautiful Trio of holiday cards! Love the cute gnomes and how you colored the scene for the second card! The warm and cozy feel of the last card is fabulous too! Great coloring using Brushos on that one!

Beautiful cards! I love the gnomes!!! The snow scene is amazing... Gorgeous background and the candles simply glow!