Hi there.  I needed a masculine birthday card and I was looking through some of my older stash and came across this Clarity Stencil of an Elephant which I got when I belonged to the Stencil Club a few years ago, and which I have never used.  It is a large stencil and Barbara gave us a couple of tutorials showing ways of using it, but I think at that time I didn't feel I was skilled enough to do anything good enough and so I put it away and forgot about it.  Now a few years later I am more adventurous so thought I would see what I could do with it.  I also used an all over leaves stencil which was part of a set from The Range.  I decided to use my Adirondack Inks for a change and chose Sunshine Yellow, Cranberry and Stonewashed. 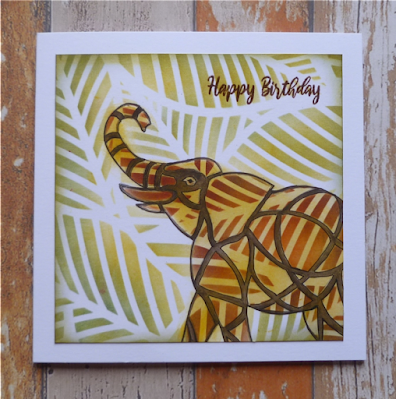 I started with a 6" square piece of card, the same size as the stencil and using my blending tool and Sunshine Yellow ink I lightly stencilled leaves over the whole thing.  I then place the elephant stencil over the leaves stencil, deciding I would just use part of it and then stencilled Cranberry ink through it, heavier towards the outside and lighter in the centre, and with the under layer of yellow it has more of an orange hue.  I then pencilled round the outer edge of it to make it stand out and went over the line with black micron pen.  I thought it still didn't stand out enough so I pencilled all the internal lines and used the pen over those, I wouldn't say this was very accurate but worked pretty well.  I then filled in the lines with a dark brown Inktense pencil and used a waterbrush to blend it all and went round all the outside lines in the same way.

I finished by cutting it down a bit and laid the leaves stencil back down and added some blue ink over parts of the background which turned it green, and then put the elephant stencil back and added more yellow there.  I then removed the stencils and darkened the edges using yellow with blue over it which makes it stand out on my 6" square white card and added a sentiment using Versafine Vintage Sepia Ink heat embossed with WOW Clear Gloss Embossing Powder.

Thank you for visiting me here today and I hope I'll see you again soon. 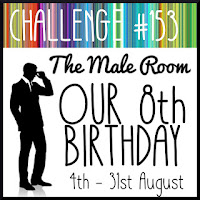 wow, amazing card and that elephant stencil is awesome ♥

Quite a lot of work involved in producing this lovely effect and thanks for the detailed explanation. Love it and it is something a bit different.

Very interesting Pat. Love the stencilling. Thanks for sharing with us at Watercooler Wednesday Challenge.

An wonderful card! An elephant in the jungle in beautiful colours! The white is very pretty together with the warm colours. What a good idea to emphasize the lines in dark brown, it makes the elephant pop.

Thanks for the reminder about the Adirondack inks Pat. I read this a couple of times to understand how you did this amazing card. How creative and so unique and such a stunner of a card and I love it x.
Thank you Pat for stopping by my blog and leaving such a kind and friendly comment which I really appreciate x.

Wow, Pat, you are really getting to be a pro at stenciling to deepen and enrich the color tones! This elephant design is dramatic and I love it! Thank you for sharing with everyone at NBUS! Hugs, Darnell

Great double stencilling here Pat! The elephant looks fabulous in the jungle greens, thankyou too for playing along at Watercooler Wednesday, Cathy x

AMAZING card Pat!! LOVE that stenciled elephant and happy to hear you finally inked him up! :) Looks fantastic with the leaf stencil in the background. The dark brown really gives the elephant present and makes it stand out. Great work with your pencils! xx

This is such a lovely card Pat. I remember admiring this stencil many moons ago but I wasn't sure how much I would use it, so I restisted temptation. I agree with what you say about getting braver, that's one of the positive sides of getting older. You've done a great job here and I hope that it's the first of many cards with this lovely stencil x

Faith A at Daffodil Cards said...

You've proved you are definitely skilled enough to do this elephant, I love you've put him off the page then added those fab leaves, LOVE the colours. Thank you so much for joining us in our Our 8th Birthday challenge at The Male Room Good Luck and I hope you will join us in our next challenge.
Faith DT

Oh it looks amazing! I love that you used that leaf stencil... it really goes well with the elephant. Great colours too! Have a beautiful week Pat

What a cool looking card Pat. So clever with that stencil. Thanks for joining us at the WWC. Tristan DT.

Wow! Absolutely brilliant, Pat! I love it! The Elephant stands out beautifully and the darker outline looks almost like it has been die cut! Fantastic!