Hi everybody.  I am still doing some tangling and I saw an idea for making this heart frame..the tangle is called Funsin, and the central pattern is called Florz, and so I decided to draw it and make it into a card. 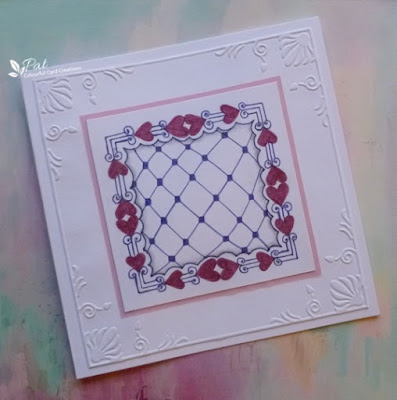 I decided to use a purple and a pink marker from a set of ten pens which I bought a few weeks ago in one of the cut price shops at what I thought was a very reasonable price.  They are called Emott and made by Mitsubishi.  I used pencil and then went over it with the two pens when I was satisfied with the outline.  I do some tangles freehand using just a pen but this needed to be even on all sides and the hearts similarly sized.  I used another tangle called Florz in the centre inside a scalloped edge to which I added some pencil shading to give it depth, using a paper stump/tortillion to blend it in.  I then found a lovely ornate frame embossing folder, so old I'm afraid I don't know who made/makes it and think probably not available any more.  It does have an extra line around the outside to make a double frame, but to make it fit more comfortably I cut that off.  I also mounted the piece onto some pale pink vellum which makes it stand out more from the white background.  I have now sent this as an anniversary card.

Thank you for joining me here today and I hope to see you again soon.

Hello Pat, your card is so beautiful, gorgeous design and colours, I love your tangling, it's so creative, Kate x

I love everything about this card Pat, just beautiful. xx

Beautiful zentangle design. your delicate hearts are a perfect frame for your central pattern ♥

Wouldn't have believed you did this yourself, it could well be a stamp, great work!! You must have a steady hand, Pat. Love the card, so very elegant!

Pat, an amazing zentangle card. I love the central panel and your heart/ionic fame is beautiful ♥

You've nailed the tangling Pat and I love how the dimensional frame draws your eyes right into it. Amazing and creative Anniversary card x.

Awesome tangling Pat! The embossed frame is the perfect border too, the couple will love this card, Cathy x

Love your Zentangle card Pat its so creative...like your embossed background as well...a perfect heart frame to finish off your card...