Hello there everyone.  The basis of my card today is a Marianne Butterfly Die which is quite large for the main focus of a card.  I found a card on Pinterest which had tiles with rounded corners, but I'm afraid to say that I am not sure which Pinterest site it was now, but anyway it gave me the idea for this card. 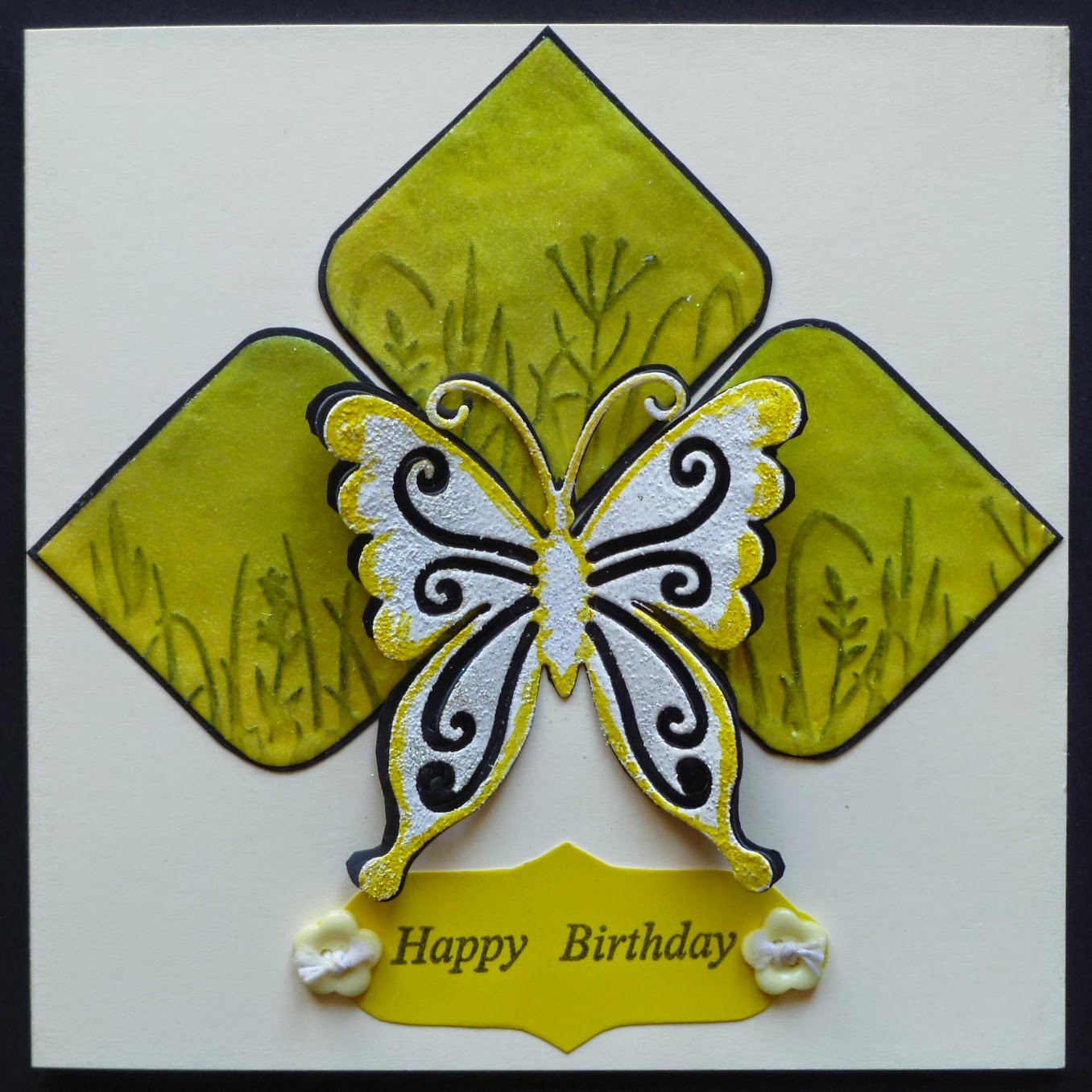 To make the tiles I started with some yellow card which I cut into 1 3/4" square pieces with two of the opposite corners rounded off.  I ran them through a freebie EF with grasses and wild flowers just to give them a bit of a pattern.  I highlighted the embossing with black Memento ink rubbed on afterwards very lightly using a piece of blending foam.  The yellow card was rather an acid yellow which I wanted to soften a bit, so I used a little Memento ink - Bamboo Leaves.  I made sure the ink was perfectly dry before using the UTE Powder.  I rubbed the Versamark all over the tiles and then coated them with the EP and then heat set.  I repeated this process to make sure there was a good thick even coverage.  I layered these tiles on to black card.  The finished tiles have quite an irridescent finish but it doesn't show up very well in the photo.

The butterfly has three layers.  The bottom layer is just embossed and cut, then a die cut layer, these are both in snippets of black card, and then the top layer is a snippet of nice thick yellow vellum.  Originally after cutting the vellum layer I decided to darken up the yellow and aded a little bit of orange, but I didn't like the finished result very much.  I decided on a radical change and rubbed some Versamark on and used WOW EP - Sparkling Snow which is quite opaque, and then added the yellow Promarker round the edges.

After completing the layout of the card, I added a sentiment using a snippet of the yellow card and a    S/B Labels Thirty Three  die, the third smallest.  I stamped the sentiment with a Creative Expressions stamp, and added two little flower shaped button decorated with a little twine.

After messing about with the butterfly rather a lot with the different colouring techniques, I found that one of the fancy shapes at the bottom had broken off, so to even it up I cut the equivalent bit off the other side.  When I had taken the photo I wasn' t too sure about the look of the finished card.  The colour on the tiles looks more green than yellow because I hadn't accounted for the fact that colours become darker and brighter after using the UTE Powder.  Anyway I am entering the card in the following challenges:

Butterfly Challenge - Springtime at Last, which must include the colour yellow.
Simon Says Wednesday Challenge which is Anything Goes with Buttons.
Pixie's Crafty Workshop where we use up our snippets of card and paper.

Thank you for stopping by today,
Pat x