Wise Owl and Sing Your Song

Hi everyone.  Here are the last two cards I made for the Chocolate Baroque December TV shows.  This one features the Wise Owl stamp set. I began with the owl which I stamped on to a piece of white card using Brushed Corduroy, Ground Espresso and Ages Mahogany Distress Inks.  I used my Misti and started with the lightest ink, and then added the darker ink around the outside and on the beak, and then added a little of the redder toned Aged Mahogany, stamping in between each colour application.  I then fussy cut it out.  I did add a little Broken China and Fossilized Amber ink to the white bits on the owl to take the stark white off. 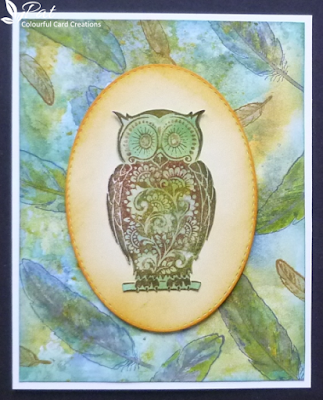 I made the background by laying Faded Jeans, Spiced Marmalade and Broken China Distress Ink down on my glass mat and spritzed with water before pulling a piece of white card through the inks to cover.  I then stamped randomly over the background with the large and small feather in the set using Faded Jeans for the large, and Brushed Corduroy for the small one.  I then coloured them with a waterbrush using the same colours as for the background but adding in some Dusty Concord.  I coloured the small feathers with some gold Perfect Pearls applied with the waterbrush too, and I also added highlights of gold to the large feathers.  I cut the background to fit a 7" x 5" card and added Broken China ink around the edge using a blending tool.

I finished by die cutting an oval stitched mat to put the owl on to and coloured it with a blending tool using Spiced Marmalade ink, and then added a piece of craft foam on the back to give it more dimension before adding the owl before sticking on to the background.

For the second card I used the Sing Your Song stamp set. 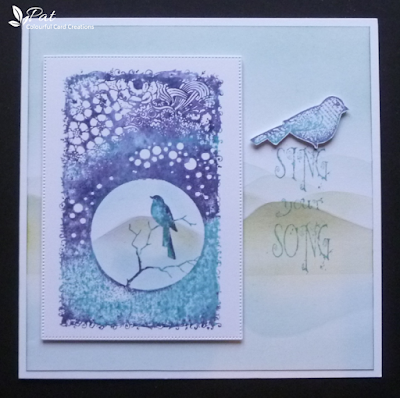 I started by die cutting a rectangular mat using my set of Crealies Pierced Dies just a little bigger than the main image using white card.  I then stamped using my stamp positioner as I wanted to use two colours inking first with the Broken China Distress Ink, and then following by some Dusty Concord DI.  After inking the stamp with each colour I spritzed lightly with water before stamping for a slightly more watercoloured effect.

I then made a background scene on a piece of white card just slightly smaller than the white base card, and inked with the two colours already used plus some Peeled Paint DI using a stencil brush to apply the ink as I didn't want too dark a background.  I made a mask for the hills from a piece of copy paper ripping and tearing to get a rough shape and then tidying it a bit with a pair of scissors.  To make the reflection in the water I just turned the mask the other way up to mirror the shape.

I then stamped the sentiment using Broken China DI and for a little extra interest I decided to take the little bird stamp from the same set and inked with the same two inks as I used on the other image but this time I didn't add any water when stamping.  I cut it out leaving a narrow white edge.

When I put the card together I raised up the image mat and the bird using a piece of craft foam behind them.

Two fabulous cards Pat and that Owl is a real beauty. I love the colours that you've used and you could just change them slightly later on in the year to make a perfect Autumnal card. I love your second card too and the way that you've sat the little birdie on top of the sentiment. Your style really suits Chocolate Baroque stamps and you've really done them proud with your samples x

Wow to both of your amazing cards Pat. The first wise owl one is so creative and love the stamped image and the background is glorious. What a stunning design on the second one. The stamp is fabulous and love the two different colours and how you stamped it. I agree with Sandma ...you are a great ambassador for the brand x.

Your cards are stunning Pat, I love them both and what wonderful colours. Finding it difficult to choose a favourite, your designs are brilliant too ,wonderful backgrounds too, Kate x x

My that owl is so intricate and you coloured it wonderfully! Love the shades you used on the second card Pat... what an eye-catcher!

lovely cards....I'm partial to the second one, love the shades of blues.
xx Karen

What a lovely pair of cards Pat and I love the creative backgrounds you created.

Both cards are so beautiful and artistic ! You've added so much details and love on your cards!
I love the softness of the backgrounds on both cards!
Wishing you a wonderful weekend, Pat!