Hi there.  I don't usually make cards for the younger members of the family as I don't really have any suitable images and also I am not good at putting them together, but I had seen an example of these fun fishes and had already started tangling it on to a piece of white card, although it looks cream in the photo, having first marked it out in pencil, and then hubby said that he was going out to buy a card for his great nephew, and it struck me that these fish might make a fun card for him. 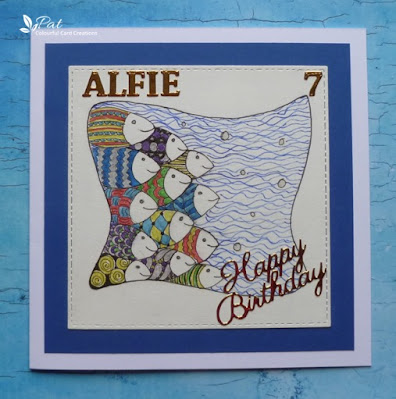 I decided to use my Sakura Starlight pens to colour them in six bright colours, and I had already made the waves using a blue pen from a set of four CD markers..I used the red one here, and I coloured the eyes of the fish with Clear Wink of Stella and I also used this on the bubbles.  I finished by die cutting it using a stitched square die, and also added the die cut name, age and birthday sentiment using some scraps of gold mirri card, and then mounted on to this blue card before adding it to my usual 6" square white card.
Thank you for coming to visit my blog today and I'll see you again soon.

A great tangled design and he certainly won't get another card like it - super.

Such a fun 'fishy' card for Alfie and I like how you personalised it. The way you've coloured the fish, with the Sakura pens looks fabulous Pat and great tangling too x.

Lovely tangle! I'm a Pisces so they make me happy. I think this is a really good card for a 7 y.o. He has his name and age on it, he will see each fish face and different body pattern, he'll like it. Unless he's already a junior ichthyologist and knows these aren't accurate fish bodies, hahaha. Got schooled one time by a nephew I made a dinosaur card for! Geez! xoxo

This is great Pat. I love those fishes. Hugs Mrs A.

You did some great tangling, Pat! The fishes are beautifully made and coloured. I'm sure Alfie will like it very much!

What a fabulous card Pat, I love your tangled fishes and the lovely colours, beautifully designed and I'm sure Alfie will love it, Kate x

Great card Par and perfect for a 7 year old....love the different patterns on your 'happy' fish

Brilliant card, Pat. I'm sure Alfie was thrilled to receive it. xx