Hi everybody.  Sorry to have been rather quiet lately but we have been away for nearly three weeks with a couple of nights in Shropshire near Ludlow, then two weeks on Anglesey in Wales and finished with a three night stay in The Wirral so we could visit Chester and we also visited New Brighton and Southport as they were places hubby used to visit as a child..mind you I don't think they are quite the same now as they were then but it was good for him to reminisce a bit...lol.  I did manage a few visits but with less time to spend got rather behind so will try and catch up over the next week or so.  We only arrived home yesterday evening and are still in the sorting out phase.  The heat was rather sapping in the last couple of days with temperatures in the mid 90s but we managed to see quite a bit.  When hubby sorts his hundreds of photos out I will select a few to show.

A masculine card to show you today for a friend who is a regular golf player so got out some sport related stamps which came with Craft Stamper Magazine over a year ago but naughty me they are only just getting their first outing.  There were only three which related to golf..a flag in the hole and a golf ball,  and also a silhouette male golfer, so those were what I used. 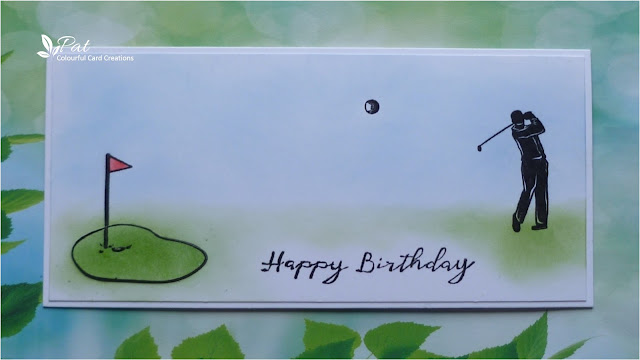 I started by cutting a piece of white card just a little smaller than my DL card and placed the four images using my stamp platform and used Versafine Clair Nocturne Ink which I then heat embossed using WOW Clear Gloss Embossing Powder.  I then added some Mowed Lawn Distress Ink using a blending tool around the golfer and extended it softly above the sentiment, and then I made a negative mask and blended more heavily on the green and then added some Candied Apple DI to the flag.  I finished by adding some Salty Ocean DI to the sky, fairly lightly, though in real life it looks darker than in the photo.  I then decided to blend a bit more green ink around the green too.

It's not a very exciting card but I thought using a DL shape would give the impression of the ball going a distance to the green, although the ball does look quite large against the size of the hole..lol.   Thank you for coming to see my blog today and I'll see you again soon.

We Love Stamping July Challenge - Anything Stamped with the Option of Hot Sunny Colours.
Addicted to Stamps and More Challenge - Any Occasion.
NBUS Challenge - Where we use our Never Before Used Schtuff.

Pleased to hear you had a lovely holiday Pat, hope the batteries are recharged.
A super card for a golfer, your little scene is great, and the golf ball looks fine, I'm sure the recipient will love it, Kate x

You were 15 minutes away from me Pat on your trip to Southport!
A brilliant card for any keen golfer! x

Good to see you back and pleased to hear you've had a nice break. This is a super card for a golf enthusiast and the DL format certainly gives the impression of distance.

We call that artistic perspective, Pat, lol! What matters is how thoughtful and personal this card is, which means so much to the recipient! Well done! I look forward to seeing some photos of your trip which sounds marvelous! Thank you for inspiring everyone at NBUS! (Hope you are now getting cooler temps.) Hugs, Darnell

Your golfing friend is going to love this card Pat. Love the soft sponging of the green and blue. Sounds like you had a busy three weeks with lots of visiting and sightseeing. Gosh, the temperature is way too hot. Stay cool! xx

CAS style is perfect for these stamps and for a guy. Lovely work, xoxo

Sounds like you had a good holiday with plenty of interesting things to see. I love your CAS card, the simplicity of the design is very effective. xx

Nice to see you back home Pat...lovely masculine card....its nice to use a DL card at times...
Sounds like you had a lovely time away visiting many places...sometimes going back to look at places you went as a child they look completly different...
I agree the hot weather does sap your energy...