Joy To The World

Hi there everyone.  I have a card for the Rudolph Days Challenge run by Mo over at Scraps of Life by Scrappymo and it runs from the 25th to the end of each month.  I have used a very old set of Hot Off The Press stamps which were a freebie eons ago and also a Sue Wilson die from her Festive Collection called Joy which I have just bought from a local shop and is having its first outing.  They don't have a terrific range of dies, mainly those by SueWilson and they are mainly ones which have been out for quite a while.  This one was there when I visited the shop several months ago and I resisted the temptation to buy it but it was still there this time so it had to come home with me..lol. 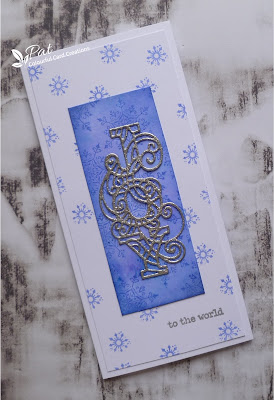 I started with the 'Joy' die, just the word and flourish outline, there is another die with the separate letters which you can use on their own or together with the outline die.  I cut it from a snippet of white card and then I embossed it with WOW Silver Glitter Embossing Powder, a couple of layers to build it up a bit.  I then found another snippet of white card to which I added some Brusho Powders using Ost. Blue and Violet, two of five new colours I bought whilst on holiday and used for the first time here, and then added the large snowflake using Blueprint Sketch Distress Ink and I also added some blended around the edges.  I then made the under layer of the background using another snippet of white card and a smaller snowflake from the set randomly stamped, again using the Blueprint Sketch DI, and also added the sentiment which I came across on another freebie set and which completed the phrase which was handy.  This time I used ordinary Silver Metallic EP.

Thank you for taking a look at my blog today and I'll see you again soon.  Just a reminder that the giveaway finishes tonight at midnight..you will find here.

A lovely festive and joyful card for the season Pat. That Joy Die was clearly sitting there patiently waiting for you to go back and buy it! LOL!

Hi Pat,
Happy Rudolf Days.
This is such a very lovely card and I love how you have heat emboosed the die cut word JOY.
Love your wonderful colour backgrounds you have created with inks and stamps.
Thank you for joining the Rudolf Challenge.
Lots of crafty love. Jenny L. DT

Such a pretty card Pat, I love the die. Thank you for joining in the fun at Rudolph Days this month.

What a beautiful die, Pat! It was just waiting for you to come back so it could go home with you! You've used it beautifully with the silver embossing and beautiful blues! So nice to see this in the NBUS gallery!

No one could resist that festive die more than once, Pat! It is a charmer and it looks wonderful as the centerpiece of your snowy design! Good job adding it to your collection and thank you for bringing it to NBUS to inspire everyone! Hugs, Darnell

What a delightful card Pat! That die was destined for you - I have the same set and mine goes back to 2016! It's so perfect for a DL card as well.

This is so pretty, Pat. I love blue and silver together. What a great find ... it was meant to be waiting for your second visit. :) xx