Hello all.  Well after rather a long time I am back with another card.  I have been rather busy of late and card making has had to take a back seat, and when I have had the time Mr Mojo has been pulling faces and telling me not to bother.  I have so many ideas whizzing through my head that I sometimes cannot make a decision which way to go, and if I am not feeling creative then my crafting space feels like a disaster zone.  Oh my word I know it sounds like it but I am not really a crafting diva, and hopefully this silly phase will soon pass.

Anyway, back to business.  I have a Sheena Douglass bluebell stamp set from her Fantasy Floral range  which I have never used, so decided to make a watercolour scene with the bluebells taking centre stage.  Sheena's stamps are quite large and this sometimes makes it quite difficult to get the perspective right, and I do think the bluebells look rather giant sized, but I suppose I could be down on my hands and knees right up close looking through them.  It didn't help when my DH on looking at my finished piece announced they looked like a herd of elephants marching across the front, but thought this could not be right as everything was far too green and lush .. lol.  I did forgive him because I must admit with one eye shut the shape of the flowers with the sort of upward curl at the bottom do look a little like elephant's trunks. 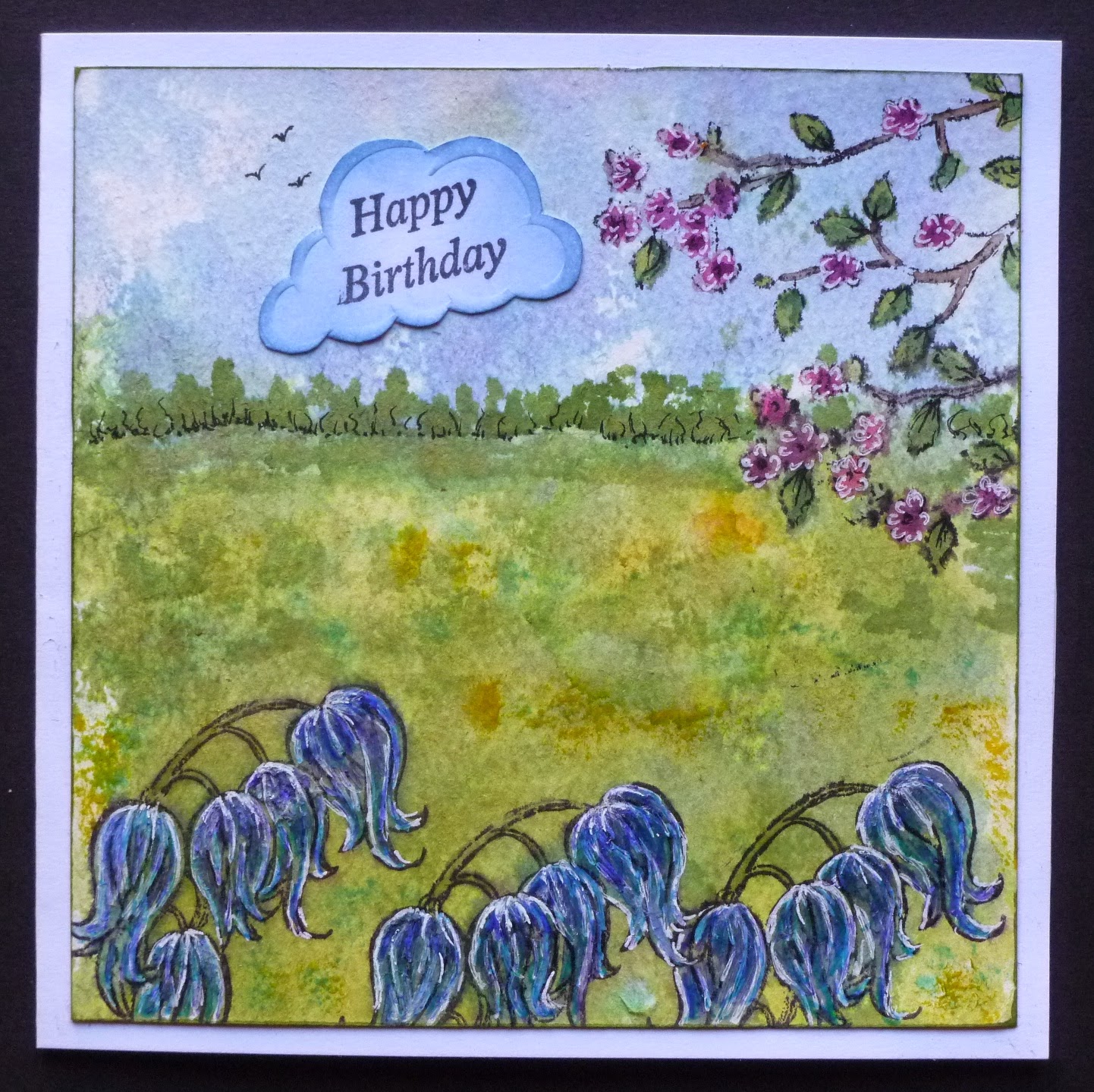 I decided the two thirds, one third rule should apply.  I put some Adirondack ink in Lettuce and Sunshine yellow, and a touch of Bottle, and also some Memento Bamboo Leaves randomly on to my glass mat and spritzed with water and laid a piece of  damp watercolour paper about six inches square  over it and moved it around through the inks until I was satisfied with the mix of colour making sure to keep the paint to the bottom two thirds of the paper.  To speed up the drying process I used my heat gun to dry it off.  I then used Adironack in Stonewashed with a touch of Spun Sugar to give a slightly lilac tinge to the sky which doesn't show up very well in the picture, and again dried it with my heat gun.  I think I did add a little Adirondack in Butterscotch and Bottle with blending foam on to the grass at the end to give it a bit more interest and also added some shadows with the Bamboo Leaves and a water brush.

As I could not find a stamp with the right sort of foliage for a flowering cherry tree, I used an embossing folder which was a recent freebie with a magazine, and inked the raised side of the folder with Memento Tuxedo Black.  Instead of running it through the machine to emboss it, I kept it open and just laid the background over it where I wanted the foliage to be and rubbed over it with my fingers so the ink left an impression.  I did this several times and this left just enough of an outline for me to colour using my inks and a water brush.  I think the colours were Adirondack Espresso and Spun Sugar, Memento Bamboo Leaves and Distress Ink Picked Raspberry.  I then stamped the bluebells with the Memento Tuxedo Black and coloured with Stonewashed ink mixed with a little Picked Raspberry, but unfortunately the background colours muddied everything a bit, so I got out some old Sakura Gelly Roll pens and found a colour which was a bit dark but with the white as well worked reasonably well and gave a glazed finish which also doesn't show up terribly well.  I know when using water based ink to colour you should stamp with a waterproof ink like Stazon or Archival, but it seemed ok in this particular instance, and I must admit I don't always stick rigidly to the rules.  You may notice that the shape of my bluebells does not correspond with the shape on the stamp.  I decided to ink only some of the bells as I like the arching stem look to a bluebell and because they are right at the front I only used about half the length of the stamp.

I finished the scene with some black outlines in places using a Letraset fine line pen, and highlighted a bit with a white gelly roll pen.  I found another freebie embossing folder with clouds on and decided to use one of the clouds cut out for the sentiment for which I used a snippet of white cardstock sponged with some Stonewashed ink.  I also put some birds in the sky with the fine line pen.

I hope you all had an enjoyable weekend, and that our friends in the US enjoyed their Mother's Day.  We of course had ours in March which seems ages ago now.  Thanks for stopping by.

Simon Says Wednesday Challenge - Spring Flowers
Pixie's Crafty Workshop where the challenge is to use scraps.  I hope I will be allowed to enter the gates this week because I have only used a very small scrap/snippet of white card for my cloud sentiment, but hopefully that will be sufficient.

This is very very pretty! You did a wonderful job! Thanks so much for playing along with the Simon Says Stamp Wednesday Challenge!

Oh Pat, this is beautiful! You must have a ton of patience to have put so much work into one card - with a brilliant result I have to say. And yes, even one little snippet is fine to come and play!

Hmm, men's opinions do differ from ours a lot of the time don't they :)

Well, they look like fine bluebells to me! Interesting reading on the how-to-s. That was an intriguing idea to do the embossing as you did too. It made a beautiful flowered tree limb to add the interest to the right side. Also liked the way you did the sky & grassy area too. I love your card, and didn't see a single elephant anywhere! You did great on this one. TFS & Hugs too.

This is lovely Pat, I love to see the bluebells in flower and they have been particularly plentiful this year. We have loads of them in our garden and they have been very pretty. I like your idea of using an embossing folder to "stamp" the blossom.
Jean x

Hi Pat, just found your lovely comment on my blog that you left the other day. I thought I would pop over and take a look at what you do, I love your cards, and the colours you've used for them, and this one would be suitable for the Craft A Scene challenge this month (you'll find the link for it in my blogs list on my blog) this month is create your own flower garden.

Thanks for the visit.
Sue xx

Bluebells have been in plenty this year and your card depicts them perfectly. Try as I might I can't see any elephants!. hugs Mrs A.

Your bluebells are beautiful and so is this card, it' looks like a little painting, fantastic! Have a wonderful weekend, Shirleyx

I think your card looks like a fantastic painting of bluebells, Pat! Well done!! I think you have plenty of mojojuice flowing, but I do understand about corralling and taming all those ideas. That's why I have a hamster up in my head to help keep me focused when I go off in a million different directions! Hugs, Darnell

Oh this is so beautiful Pat.
luv
Debby

Very beautiful creation you have made Pat, it looks a bit like a painting, love the flowers , and the tree branch a lot!!!

Beautiful card Pat. I did giggle when I read about the elephants. Love the blue bells. They look perfect. I know what you mean though about the size of some stamps but some times I think it is nice to have things out of perspective.
Hugs,
Flo x

Oh Pat, you are becoming a scene creating Queen! This is lovely and just like a meadow of bluebells should look!