Hi there.  I have used this Deep Red - Love Bench stamp before for an anniversary card on here, but this time I decided to paper piece the lady's dress and the umbrella, and having seen cards on pinterest with an overlay cut out heart with the image showing through the heart shape it gave me an idea for something just a bit different. 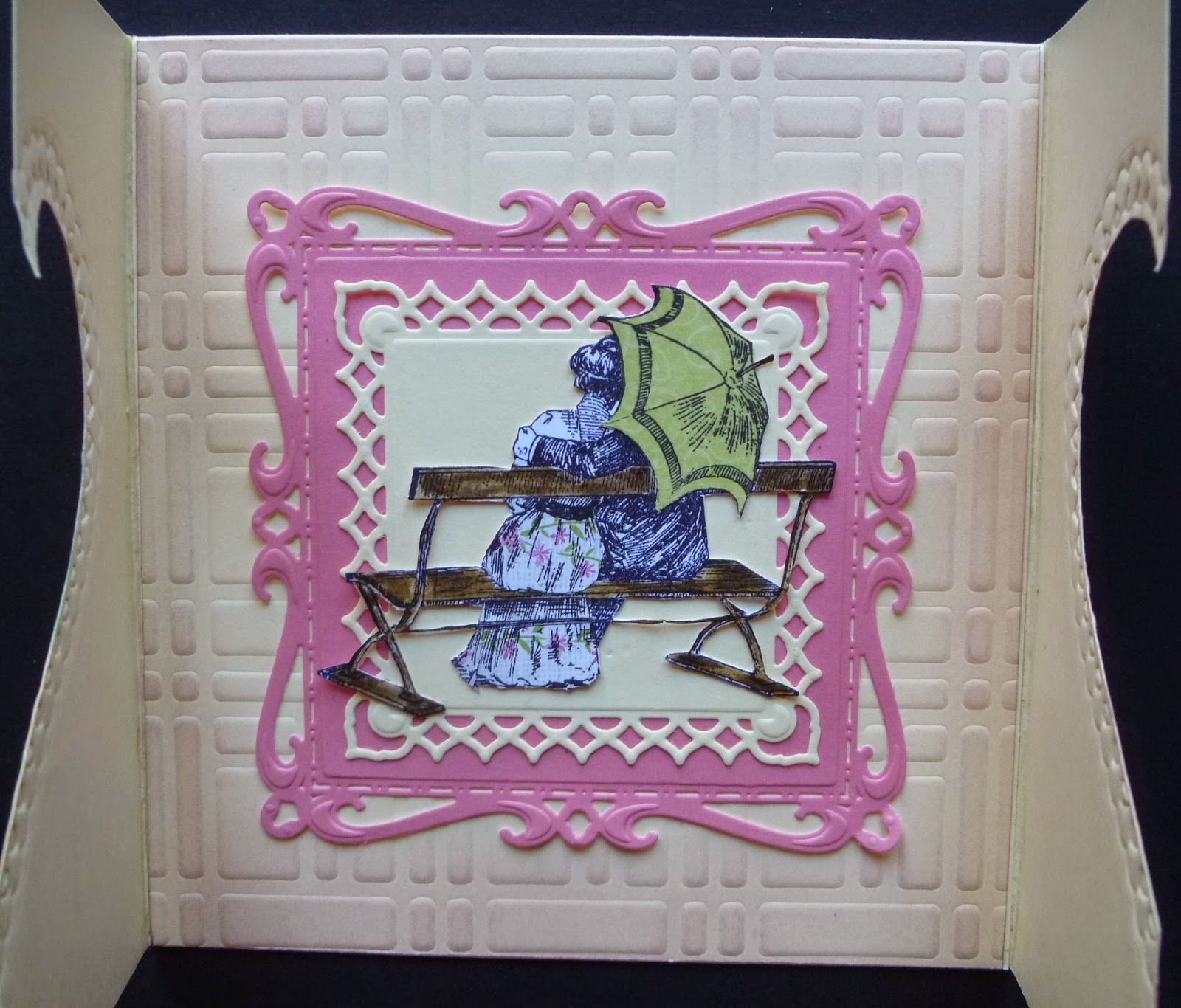 I'm afraid the colour of the image looks blue but I actually stamped it in Jet Black Archival.  The cream square card is turned so the fold is at the top making a tent card, and the image was stamped with the black Archival ink on to a scrap/snippet of white card.  I coloured the bench with Walnut Distress Ink, and then I paper pieced the dress and the umbrella.  The lady's dress was cut from a freebie paper which was white with a very small design in pink and green, but to be honest it is very difficult to see in the photo and it too looks blue for some reason.  The green for the umbrella was also a freebie paper, and this you can see more clearly.  I cut this out which was a bit fiddly especially the thin piece at the back of the seat which very nearly broke and looks a little uneven, but I decided that trying to cut it any straighter would probably just make it worse.  I used a mask from That Special Touch called Funky and embossed a snippet of cream card, and after cutting and adhering to the front of the card, I coloured it very lightly round the edges with Victorian Velvet Distress Ink.  I used two of the dies from a Spellbinders Decorative Elements set called Captivating Squares.  I thought it would look quite nice to use the pink with the cream to give a bit of contrast. 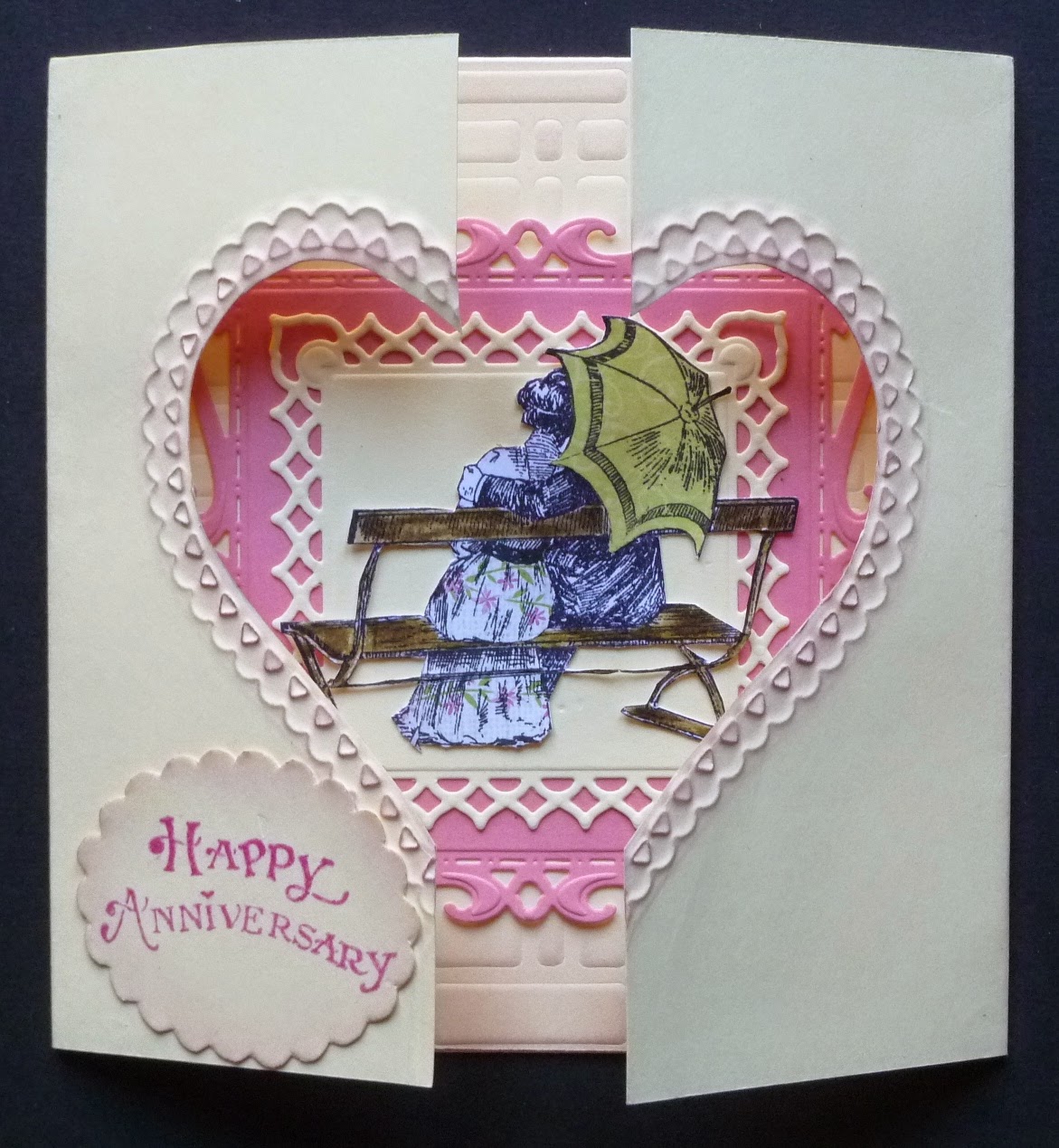 For the final layer I used my  Nellie Snellen Multi Frame Heart die, the largest one in the set and impressed the die centrally on to a piece of card the same size as the base card.  The order using the Grand Caliber is pink embossing plate, silicone mat, card, die then the base plate on top.  Doing it this way up allows you to see where you are placing the card on top of the die, and as long as the silicone mat goes between the pink plate and the cutting side of the die you won't mark the plate.  This way it leaves the impression without cutting through.  I then cut through the centre of the heart and round the inside of it as well.  I then made a crease about a 1/4" from the outside edge of each piece and before sticking with some strong wet glue to each side of the main card I used the Victorian Velvet DI very lightly around the edge of the heart.  The only mistake I made was not to add on the 1/2" total wrap round to the original measurement so unfortunately the card did not meet in the middle, but I decided that as it was going to be seen open to view the scene within, I would  give myself a little artistic license and leave it be. 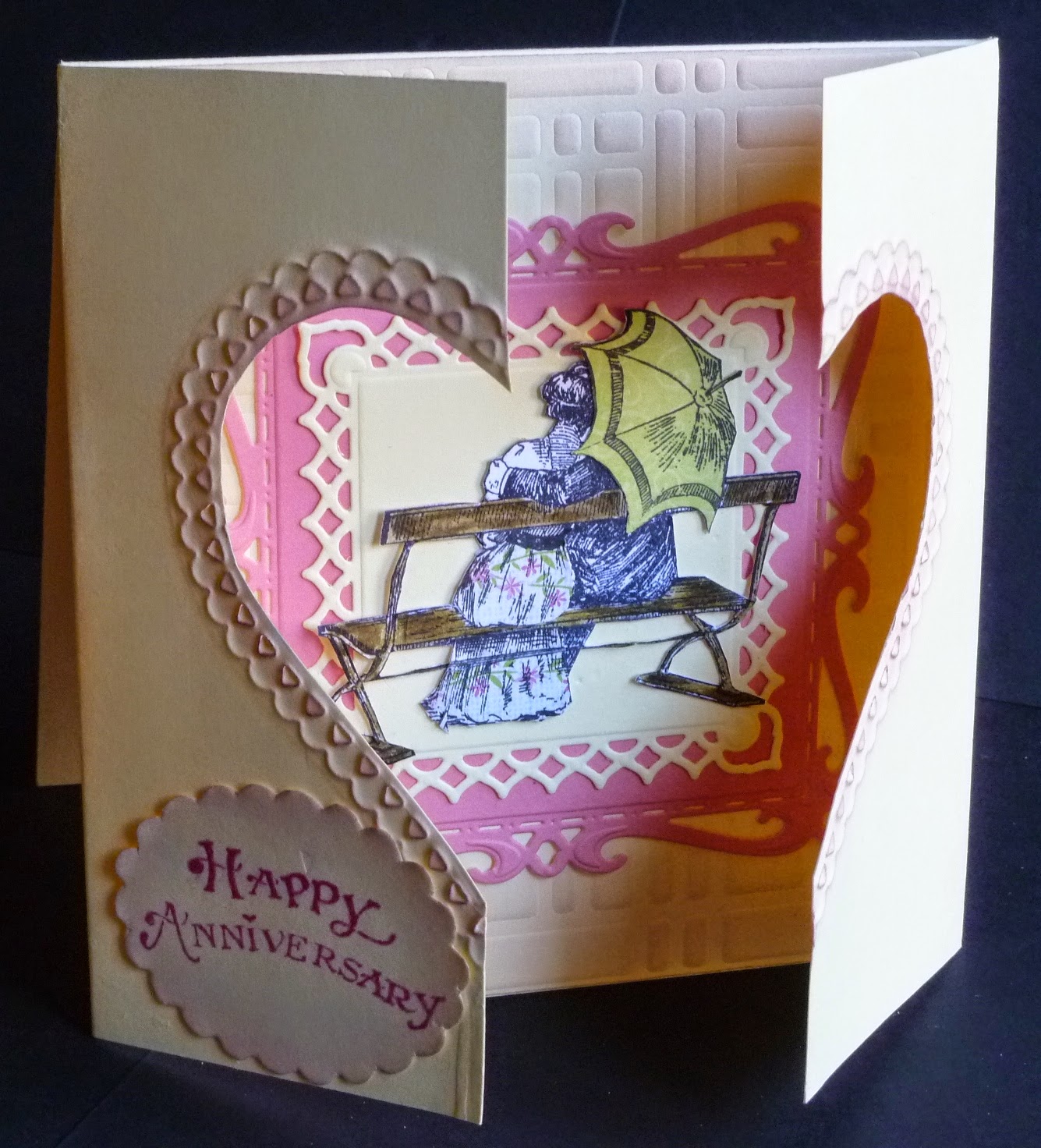 Finally I stamped the sentiment on to a a snippet of cream card using a S/B Nestabilities Classic Ovals, the second smallest size die, with Picked Raspberry DI, and then I used some Victorian Velvet DI around the edge and adhered it to the front of the card.

By making this extra heart layer on top of the tent card you then have a card to write inside of rather than having to write on the back of it, and I do like to use an insert for writing on too.

I hope this all makes sense, and although it took a bit of time to achieve I think it looks just that little bit different, and as my cards are usually the boring square variety I thought it was a change to try something new.

Have a good weekend, and hopefully I'll be back during the coming week. There seems to be so much going on that I have been finding it difficult to find the time or the energy to craft much over the last two or three weeks, but I have managed to get round to most of my regular ports of call, but if I have missed yours then please except my apologies, and I will try to do better, as I do love to keep in touch and see what everyone has been up to.

At the very last minute I am entering this card over at Pixie's Crafty Workshop as I used snippets of pink and cream paper and cream card.
Posted by Pat at 12:30 am