Hi all.  I can't believe another month has gone by, and May's Rudolph Day is here.  Stamping for Pleasure's Sarn runs this challenge which asks for two cards,  and I am going to try to enter each month from now on.  I started last month as personally I find it difficult to think about Christmas cards too early in the year. 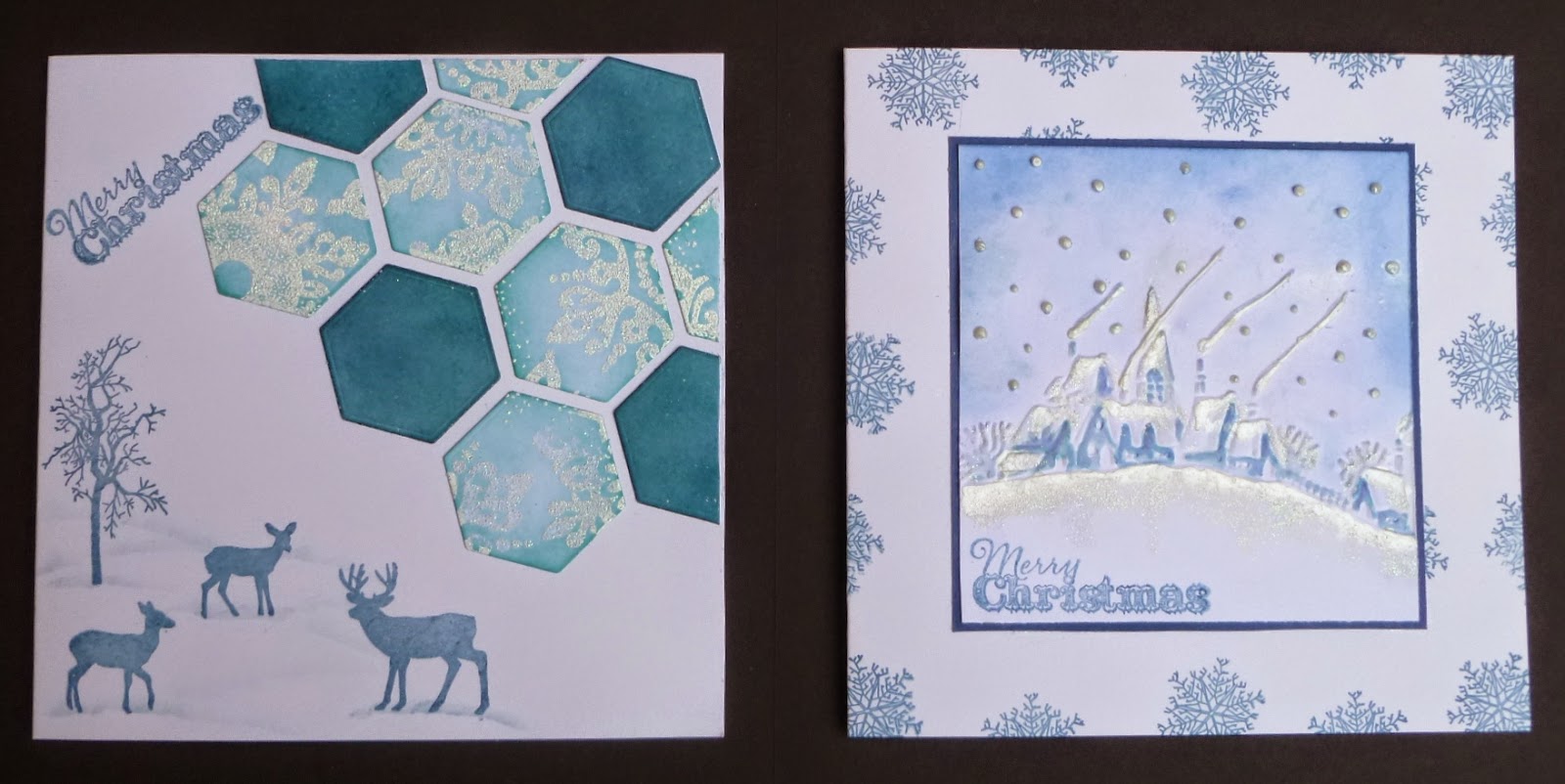 I recently acquired a set of hexagon dies from X-Cut so I thought I would christen them on this first card.  I used a snowflake stamp from Chocolate Baroque called Snowflake Shadow and I stamped it onto a snippet/scrap of white card using Versamark Ink and WOW Sparkling Snow EP, and die cut with the smallest hexagon die.  I coloured these with Peacock Feathers Distress Ink and then some cut from plain white card I coloured with a combination of Peacock Feathers and Memento Nautical Blue.  I kept adding the ink until the colour was quite dark, as you can see, but when finished I think they would have looked better slightly lighter in tone, but never mind.  I found a design I liked and stuck them to a square white card.  On the left hand side I used the three deer and tree from the set by Claritystamp, and stamped using the Memento Nautical Blue ink.  I finished by adding some shadows under the deer and tree, and on the snow to give some shape, and added a sentiment with the same Nautical Blue ink.

The second card uses a Cuttlebug Embossing Folder called Winter House, which I have had for several years, but now seems to have been discontinued.  I used a scrap/snippet of white card and then as I wanted to put it on a square card, I cut it down.  I like the monochromatic look in blue, as you can see, so I used some Adirondack Stonewashed Ink which I added with a water brush to the sky and the houses, and then I added a little shadow to the buildings in the Nautical Blue, but it doesn't show up that well in the photo.  To add sparkle and texture I used a Versamark pen and painted some on the roofs and on the snow in front of the houses, and heat embossed with the WOW Sparkling Snow EP.  I then added some Perfect Pearls to the little dots of snow and the smoke from the chimney, and  to the roofs and snow in front as well.  I think it just adds some extra shine, and I also added a sentiment with the Nautical Blue.  I then finished by matting on to some dark blue card, and then on to the base card which I decorated using the snowflake stamp from the Clarity set using the Nautical Blue ink.

I hope you had a good weekend.  Those of you in the US I see had a Memorial Day on  Monday, our equivalent of which is Remembrance Day in November.  If we lived in the perfect world there would be no need to have Memorial/Remembrance Days, but I don't see things changing much for the foreseeable future, so we all remember in our own way all those who have served and are still serving their countries in this way.

Good job on making two more excellent Christmas cards, Pat, even though it seems weird to make them so early in the year. I know what you mean! I started off making mine in January, but I've since fallen off the wagon and hope to get back on it again next month. I thought your newer post was funny about going to the Playground NOT at the last minute, lol! You will be a nice surprise and a big hit mid-week! Hugs, Darnell

Hi Pat . . . thanks for playing along with Rudolph Day and entering these two lovely snowy cards. Your new hexagon die looks like it will be good value.

Loved both these cards & thanks for reminding me about this older C/B folder. It's one of the 1st I ever purchased. Loved your hexagons, and I liked the contrast of your darker colors too. That deer set is wonderful & so pretty with the hexagons in the opposite corner. Great cards on the both of them, and thanks for explaining how you added the snow to the embossing. Good idea. TFS & hugs

Two more beautiful cards. Such pretty shades of blue on these beauties!