Hi there everyone.  I thought I would get my entry in early this month for the CAS Mix Up August Challenge, and I needed an anniversary card so made the card with the challenge in mind.  This month we have to include Stencil Monoprinting + Stamping + Our Choice, so here it is.  I used a Chocolate Baroque set called Fluttering Hearts, and the third heart flower is separate from the other two when cut out. 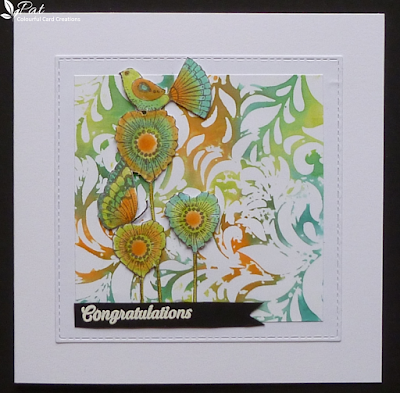 I chose a stencil by Sweet Dixie called Fern Flourish and inked up the stencil itself with three Distress Inks in Twisted Citron, Carved Pumpkin and Mermaid Lagoon, rubbing the inks randomly over it from the pads.  I then spritzed it (make sure you spritz until it beads...ask me how I know..lol) and then placed it face down on a snippet of Chocolate Baroque Drawing Cartridge paper allowing ten to twenty seconds before lifting it off, and at this point  I usually get a piece of kitchen towel and rub that over which gets rid of any excess liquid before lifting it.

I continued by stamping the Chocolate Baroque image on to another snippet of white card using Versafine Smokey Gray Ink and then coloured it with my Wink of Stella Pen by laying down the same three Distress Inks on to my glass mat as I used for the background, and used my WOS Pen to paint the image, which gives it a wonderful sparkle, and then fussy cut it out.  It is one image but when stamped and cut out one of the heart flowers is separate.

I finished by die cutting a white square stitched mat with another snippet of white card, using a set from The Works and layered my stencil monoprint on to it and adhered this to a white 6" square base card.  I added the cut out images and gave them some dimension with Pinflair Glue Gel.  I then stamped a sentiment on to a snippet of black card using Versamark Ink, and heat embossed with WOW Opaque Bright White Embossing Powder, and cut it into a banner shape and glued it with some of the Pinflair Glue Gel.

Thank you for visiting today and hope your week is going well.  I for one am pleased that temperatures have dropped back to a more comfortable level, but let's hope that the fine weather has not left us entirely.

Pixie's Crafty Workshop - No. 332 where we use up our snippets of card and paper etc.

Pat I love those background colours, what a great colour combo. Your Chocolate Baroque images are the perfect complement :)

Beautiful swirly Stenciled Monoprint background, Pat. I love your color combination. Your die cut flowers go so well with your background. A really pretty anniversary card, my friend. TFS and joining us at CAS Mix Up. Hugs..

OMGosh Pat, how beautiful, I love the colours and design. The image is wonderful and a terrific background, the fluttering hearts stamp is just perfect for an anniversary card, Kate x

Love, love, love the beautiful design and colors of your monoprint, Pat! The sweet stamped images are perfectly matched! Thanks so much for sharing this with us at CAS Mix Up!

Yes I am with you on the weather...x. What a stunning card. Love the colours, the stamp and the stencil monoprint technique looks fabulous on your beautiful card. Thank you for joining in the fun challenge at The CAS Mix Up Challenge x.

Beautiful stencil monoprint background Pat!! Love those colours which are so bright and fun! Using the same colours for your heart flowers ties it all together. Wonderful design. Thanks for sharing with us at CAS Mix Up! xx

Wonderful card, Pat. The monoprinted background is beautiful and I love the colours you've used. xx

Oh this is stunning!! What a beautiful result you got here Pat and I love those colours! Good luck!

I just love the colors you used on this Pat - beautiful monoprint stenciling and lovely colored images! Thanks for joining us at CAS Mix Up! Julia xx

Wow, I love this piece. So tropical and cheery! Great design and beautiful colouring too.
Thanks for joining us at CAS Mix Up! xx

What an awesome background. I love the colors you used and the white on white really make the colors just pop! Thank you for joining us at Simon Says Stamp Wednesday Challenge. Good Luck.