Robin the Spruce and Serena

Hi everybody.  It is nearly the end of another month so time to show some more of the cards I made for the July TV programmes featuring some Chocolate Baroque Christmas stamps, a new one called Robin the Spruce, and one which has been around for a while called Serena.

For this card I have used stamping on to acetate using Black Archival ink.  After stamping the image put it to one side and leave it for at least 30 minutes to make sure it is perfectly dry, ask me how I know...lol.  I then coloured it on the back using some alcohol inks and a brush, mixing them with a little of the blending solution.

It doesn't have a totally smooth finish but then I backed it with a piece of white card on which I stamped the image and lined them up, which has strengthened the line art.   I folded the acetate around the backing piece top and bottom and then added a very little glue down the sides to keep it flat.The alcohol ink colours were Stonewashed, Indigo, Watermelon and Lemonade, and I mixed Butterscotch with a bit of Watermelon to make a brown colour.   I then layered this on to another piece of white card before adding it to the white base card. 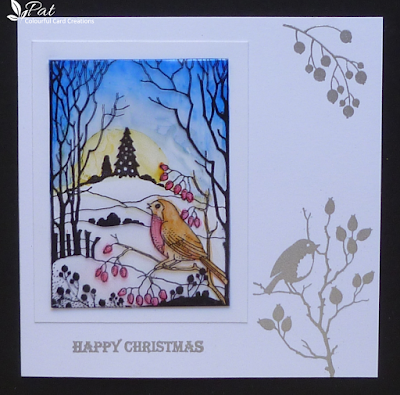 
I love Serena which is such a pretty seasonal image, but actually she could be used at any time of the year with different colours, and mine aren't typical Christmas colours either.   I used Distress Oxide Inks in Salty Ocean and Worn Lipstick, and then I coloured her with them as well. 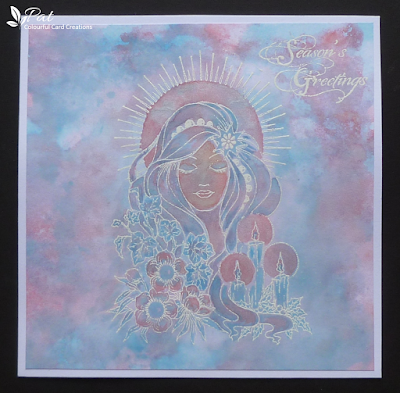 I started with a piece of the Frisk Velvet Card and stamped the two colours down on to my glass mat and spritzed with water before dragging my card through them, and I did this several times to colour the card drying in between layers of colour until I was happy with the finished result.

I then heat embossed the image using Versamark Ink and WOW Opaque Bright White Embossing Powder and also added one of the sentiments from the Festive Wishes set, and used the same white EP.  After colouring the image I added some Wink Of Stella for the area behind her head and around the candle flames which unfortunately doesn't really show up in the photo.

I finished by adding this to the white base card.

I have a couple more cards which I will try to show before the end of the month.

Thank you for visiting today, and a special thank you for all the lovely comments which I really appreciate.

Pat, your AI on acetate is stunning. I had forgotten about this beautiful technique. I love the soft colours and the edge stamping.

Two stunning cards here. I love them both but the first one is my favourite as I just adore the beautiful winter scene and the Robin looks lovely in the foreground. Thank you for explaining how you achieved the finished result. Your second card is so delicately feminine. I love the colour combination and the white embossing finishes it off perfectly, it’s a beautiful image too. Great work Pat. Crafty hugs, Sandra x

beautifully done cards Pat, love how the first one has the image highlighted with colour and the bkg is stamped with the leaves, looks great. Your other card is filled with interest and just draws the eye inward.
xx Karen

Both of your cards are wonderful. The technique on the first card looks amazing and love how you enhanced the line art and how you did the painting with the alcohol inks. Unique and beautiful second card with pretty and delicate colours. The image looks fabulous X

Gosh! Two gorgeous & so different cards. Love the acetate robin...I've tried coloring on the back of vellum, and find that difficult enough. What a splendid result you have achieved with this...and I love how you've done the embellishment with the leafy vines. #2 is just stunning. I'm not sure what is 'velvet card' but your dragging/smooshing technique created such a soft, silvery sheen to the background for the wonderful embossing. This is just beautiful Pat. TFS

Two fabulous cards, Pat. The amount of white on your first card really makes the beautiful scene pop. I've never had much success stamping on acetate, but I guess with the invention of the stamping platform, I ought to give it another go. I love how you've added the heat embossed images down the side. The image on your second card is so pretty embossed in white on the delicate colours of your wonderful background. xx

Another fabulous technique beautifully explained Pat! Your narrative is always as wonderfully detailed as your fabulous creations! I haven't even dreamt of Christmas yet, and I know it will be here before I know it! Oh my gosh, I am SO not ready! Have a lovely upcoming weekend my friend! Hazel xx

WOW Pat what gorgeous cards, the robin card is stunning, I love how you've created it, beautifully colours too. Serena as always is beautiful, lovely background inking, Kate x

Two beautiful and creative cards Pat. Especially love the look of the faux stained glass with painting AIs on acetate. Adding the stamped image on your background white card is a great idea. Thanks for the great tip! xx

Stunning cards!! I'm blown away with that robin scene! And the Serena card is just that... so Serene!