A Marvellous Bird is the Pelican!

Hi there everyone.  I have this Pink Ink Pelican stamp which is getting it's first outing on a card for our son and I have made it the Australian species as that's where he lives.  That saying about it's beak holding more that it's belly can is apparently accurate as they say it can hold three gallons the equivalent of 24lbs, but it's stomach just one gallon or 8lbs.  For the card I also used some leaves from Nature 1 and Autumn Poppy by Chocolate Baroque stamps and also a Lavinia Stencil called Crackle. 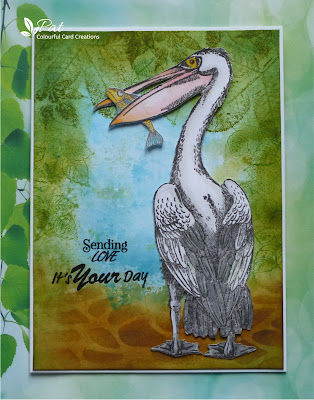 I started with the background using some white card which I smooshed with Distress Inks, Salty Ocean, Peeled Paint round the edges and Brushed Corduroy and Dried Marigold along the bottom.  I managed to target the ink fairly well.  I then added the leaves with the Peeled Paint and also some Mowed Lawn, and then added the stones using the stencil and some Vintage Photo and a bit of Walnut Stain.  I also added some more of the greens around the edges and over the leaves using a blending tool and also round the edges of the bottom half and some more of the browns over the stones.

I then stamped the pelican and the fish on to a piece of white card using Versafine Smokey Gray Ink and heat embossed with WOW Clear Gloss Embossing Powder, and coloured with the waterbrush using Abandoned Coral and Fossilized Amber on the beak and for the around the eye, and Black Soot for the feathers and more watered down on the legs and feet.  I emphasised the feathers with a Black Micron pen as although I had embossed they had disappeared a bit under the ink.  I also shaded the white feathers with very watered down black.  I fussy cut it out and added it to the background using silicone glue, and added the fish which is in two pieces, glued behind its beak.  I then finished with the sentiment stamped using Versafine Clair Nocturne Ink heat embossed with WOW Clear Gloss Embossing Powder and used some Glossy Accents on both his and the fish's eye.

Fortunately the card did arrive in time for his birthday which I was pleased about as he never did receive the Christmas card I sent him.  Thank you for coming to visit my blog today and I'll see you again soon. 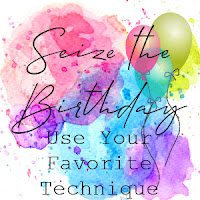 What a fabulous pelican Pat, perfectly coloured. You’ve showcased him beautifully with your lovely background. xx

That's certainly a fabulous pelican stamp and the card you've made is great. Pleased to hear that it arrived safely, it is so upsetting when cards don't reach their destination particularly when it is a special one.

A brilliant card your background is just perfect for the image. Thanks for taking part at Allsorts challenge and for the pelican info.

Morning Pat...your pelican card is fabulous...just love the background colours your have created..I'm sure your son loved his card...
Hoping you're managing to stay cool today

gorgeous card....love how you did the edges, yet left the center clear for the bird image.
xx Karen

Another fabulous card Pat - love how you have combined the inks for a scenic background, and the slightly vintage look of the pelican stamped in grey. What a shame your Christmas card went missing - such a shame when cards for loved ones have ahd so much effort put into them ... so glad this one arrived safely! Thanks so much for sharing with us at Allsorts challenge this week.
Pauline xx

This is such a cool pelican Pat! They are such fun birds, glad the card arrived in time for your son's birthday. Mail can be a bit hit and miss getting here at times! Love the background stencilling and stamping, he looks like he's about to step out of his hidey hole into the world. Thankyou too for playing along at Seize the Birthday, Cathy x

Beautifully done with this gorgeous image, thank you so much for joining us at Allsorts challenge!

What a magnificent card Pat! Inking and stamping looks fab and so clever to chop fishy up hanging out of Mr Pelican's beak!
Great make. x

A fabulous card Pat, I love the pelican image and your colouring. Such a super background too, great choice of colours, Kate x

Pat, Another gorgeous card! This Florida girl loves your Pelican! Thanks for joining us at Seize the Birthday!

WOWser! What a fab and vibrant make this is - cracking job, Pat

That is certainly one cool pelican image but I'm really drawn to your awesome background. It's beautiful!!! Thanks so much for playing with us at the Seize the Birthday challenge!

Oh what a delightful stamping and ink blending job you've done, Pat. I know he treasures it. xoxo

Fabulous card for your son. That pelican is awesome. Really stands out on your amazing background. I had no idea about pelican's and how much they hold in their beaks. It's a bit scary, actually! :) xx

Such a great card, I think you did a wonderful job making this one with the lovely inking and stamping for your son. The panel with the pelican looks great against the backpanel! Australia is a long way from England, so how nice that he got it in time!

What a great card Pat!! I love pelicans and this guy is amazing!! Perfect background for this one! Thanks so much for sharing with us at HLS Watercolour Challenge this month! Have a good day!:)