Hi there everyone.  I have an 80th birthday card today made for a lovely friend from hubby's choir and as he sings and plays the guitar I thought this would work well.  He had a celebration party which was lovely.  I used the acoustic guitar image from an old set of stamps from Creative Stamping Magazine from a few years back, and I added a clock face and cogs stencil in the background as he was an engineer who sorted the overhead wires out so as the song says he was 'a lineman for the county' here in Somerset, and I did use a countryside scene too, but that doesn't really show through.  Sadly there is a white mark on the guitar which I only noticed after I had taken the photos (I need new glasses..lol).  I think the card backing the neck of the guitar was a little short of the body and it developed a crease which I didn't notice and I did fix it with a bit of pencil before we went to the party but didn't have time to retake the photos. 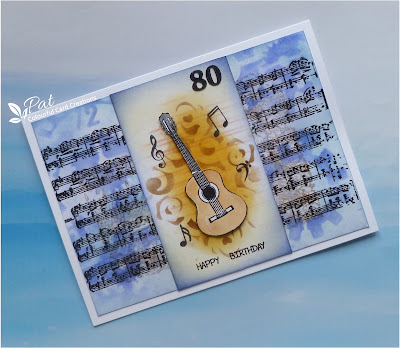 I started with a piece of white card to fit a 7" x 5" card and added the countryside scene from a very old set of stamp by Sheena Douglass using Vintage Photo Distress Ink and I thought it was too prominent as I wanted to add other things over the top so  I spritzed it with water and dulled it down.  I then added an Artistic Stamper Music Background stamp using Versafine Clair Nocturne Ink and heat embossed with WOW Clear Gloss Embossing Powder and blended some Adirondack Stonewashed  Ink over the top, and then added the cogs from a set of stencils bought at The Range quite a while ago using BluePrint Sketch DI. To be honest other than to add a bit of brown in the background the scene was more or less totally obliterated but the overall look was pleasing to the eye.  I did finish the background layer with some more BluePrint Sketch using the pad to ink along the edges.

I next stamped the guitar with the Nocturne ink onto a snippet of white card and heat embossed with the Clear EP and watercoloured with some Distress Inks and a waterbrush using Black Soot, Brushed Corduroy and Vintage Photo, and then fussy cut it out.

I found another snippet for a panel to go down the middle of the card and used another stencil from the sets I bought at The Range using a blending tool and Ground Coffee DI and added some blended Fossilized Amber DI over the central area and more softly over the rest of the strip, and finally some music signs and notes stamped around the edges again using the Nocturne ink and heat embossed with the Clear Gloss EP, before backing the guitar with a double layer of pieces of card to give it dimension, and then added it over the top (I don't usually do this but my silicone glue would not come out of the tube..drat!)  To finish I cut the strip to size and darkened the edges with Blueprint Sketch DI before mounting the background and the strip on to the card.  I also die cut the numbers from a piece of card which I  first covered in Black Soot DI straight from the pad and heat embossed with the Clear EP.

A lot of thought has goner into this lovely card to make it personal to the recipient - love it.

Wow - lots of work went into this great card for your friend. It's great.

He must have been so happy with your wonderul card! It is a very personal card, people always like that very much. Beautiful colors and use of materials, Pat!

What a super card Pat! The layers forming the music background give great depth.
Your guitar pops off the front and I wouldn't have noticed the white mark if you hadn't said!
A great make for any musician. x

Love the personal card with the music!
Grtz Ellen

My word Pat - what a stunning card this is! So perfectly thought out and made. AND to work in the guitar and lineman for the county was flippin' genius! And that's before mentioning the snippets - magnificent!

absolutely gorgeous Pat, you know how much I love layers on a card - this one's a stunner. I'm sure the recipient will be over the moon ♥

Gorgeous!!! You put so many lovely details in your card for the recipient! What a special card!!!

Beautiful card, I know he will treasure it! xoxo

Super card and I’m sure the recipient was thrilled to receive it. xx