Hi all.  This is a very quick Christmas card I made to enter into the Rudolph Days Challenge run by Mo over at Scraps of Life by Scrappymo.  This is the last monthly challenge of the year which I am only just in time for but didn't want to miss.  It sounds as though there will be something going on over there in December so watch this space. 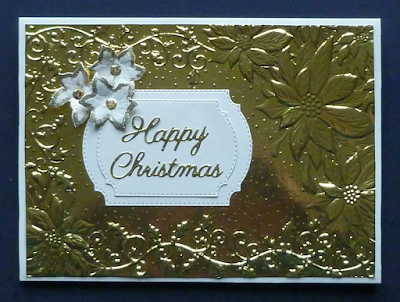 I bought this 3D Pretty Poinsettia Embossing Folder just recently, which is made by Crafters Companion, and I think you'll agree that the embossing really is beautifully three dimensional.  This is the first use so a NBUS item, and I think I will be making some more cards with it to get the card numbers up as it only needs a sentiment added as I have done here, plus after looking at it I decided to add the little flowers. You can of course do lots more interesting things but for speed of production this is probably how I will make some more, maybe using different colours of card and adding some gilding wax or ink.

I embossed it using a snippet of gold mirri card, and besides the card I had decided to mount it on I had another left from the same pack which I have had for years and which was a bit dog eared, so not suitable to us as is, so I cut the card apart and used part of it to make three little poinsettia flowers using a NBUS die by Sue Wilson which I got recently called Poinsettia Cluster.  I used my versamark pen to add the ink round the edges of the flowers and then heat embossed using WOW Gold Glitter Embossing Powder and added a gold sequin to the midde of each flower.

I completed the card by adding the embossed layer to the 7" x 5" gold pearlised base card, and cut a double sentiment mat using two of the dies from a set I bought from The Works with some more of the gold pearlised card.  I die cut the sentiment from another snippet of gold mirri backed with Stick It adhesive and added it to the card.  Lastly I added the three little flowers to the corner of the sentiment mat.  I am not totally sure that the flowers are quite right but they were stuck with glossy accents and once dry there is no going back so I'm stuck with them...lol, sorry for the pun.  For some reason the gold pearlised card looks white in the photo but in real life it is a soft gold colour.  The daylight was beginning to go so we'll put it down to that.

Thanks for stopping by the blog today and I hope to be back soon.

Hi all.  I have been busier with outside things recently and my mojo has been harder to summon up.  I did intend to show a card this time which I made for another male birthday but stupidly I forgot to take a photo before posting it.  It was a scenic one with silhouette lions from a set by Sheena Douglass, and I am gutted that I can't show it.  November is a heavy cardmaking month for me, and then of course there are still Christmas cards to make!

This masculine card is using a Michael Powell stamp I got a while ago from a local shop that was closing so thought I would christen it with this card.  I did more or less follow the suggested colours on the stamp itself. 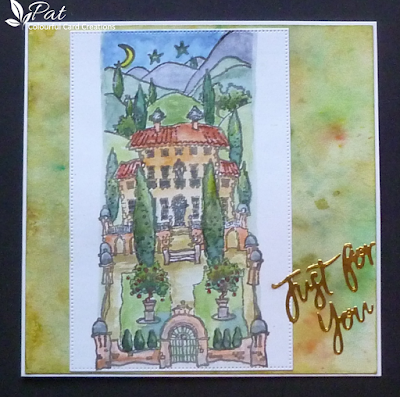 I found a snippet of smooth white card and stamped using my Versafine Smokey Gray ink.  I did stamp it several times using my Misti so the ink looks darker.  I coloured it with my Lyra Waterbrush Pens using my glass mat and picking it up with  a waterbrush.  I only have twelve colours, and this way you can mix the colours together and get a lighter coloured finish.  These Michael Powell stamps are quite busy so I thought the lighter finish would look better.

When I had finished colouring it I cut it using one of the Crealies Pierced Rectangle dies but the stamp is quite long and thin and I didn't have one narrow enough so I used a technique I saw a little while ago, not sure where now, but you cut it with a wider die and then place it back into the die overlapping the edge with the amount you wish to lose making sure you line it up so the pattern matches, you can usually feel if the paper is pushed in to the grooves, but obviously easier using a plain edged die, and then just run it through your machine again.  Luckily it worked well, I did hold my breath and hope for the best because I would have had to start again which wouldn't have pleased me much.

I wanted a background for the topper so using some Distress Inks in Mowed Lawn, Spiced Marmalade and Faded Jeans I laid the colours down on my glass mat and spritzed and flapped the snippet of card through it with the intention that the colour would be more random with white areas, but I think I added too much water so it spread and the colours merged giving a rather muddy look.

After making sure it was dry I then got out my Brushos and added some more green, orange and a little purple separately, spritzing with water and drying in between.   I left this overnight and when I looked the next day and put the topper over it I decided the colours did  complement one another better.

I then put the card together mounting the background on to my usual 6" square base card and added an XCut die cut sentiment using a snippet of gold mirri card. 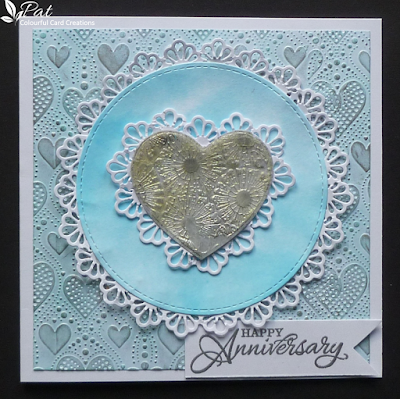