Hi everyone.  I still have some cards to make but this is one more for the pot..lol.  It's still Rudolph's Day...just, run by the lovely Mo and I really had to join in as it's the last one of the year.  I am still loving doing a bit of tangling and I saw some Christmas designs with similar trees to this so I doodled and came up with this.  The background is an embossing folder by Crafter's Companion bought at The Range recently, so this is it's first outing.  I have been trying not to do snowflakes so much this year, but I do adore them and when I saw some of the designs they had at the range all featuring snowflakes, they just happened to fall into my basket..lol. 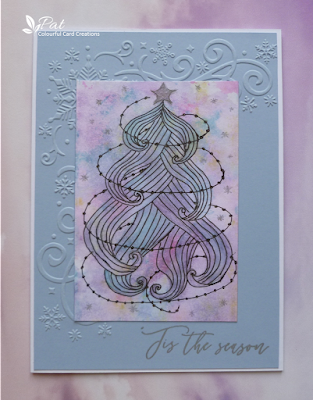 I started with the offcut of white card which I just had sitting on my table and did a washy background using Broken China, Dusty Concord and Picked Raspberry Distress Inks.  I then pencilled the design and when happy I went over it with a No 3 Black Micron Pen.  I added some sparkle using a Sakura silver pen on the star at the top, and also some little stars over the background, and on the circular ornamental line around the tree, highlighted the dots which is difficult to see but has a lovely sparkle.  I then embossed the piece of blue card with the Touch of Winter Embossing Folder and cut it to fit a 7'' x 5'' card and added one of the sentiments from last month's Creative Stamping magazine, so this is its first inking too.

Thank you for your visit today and I hope to see you again soon.

Hi everyone.  I am still loving the bit of Zentangle I have been doing and this is another masculine card which I have made using a stamp set from Chocolate Baroque called The Art of Chess.  I also used an Aall and Create stamp No. 115 chess border. 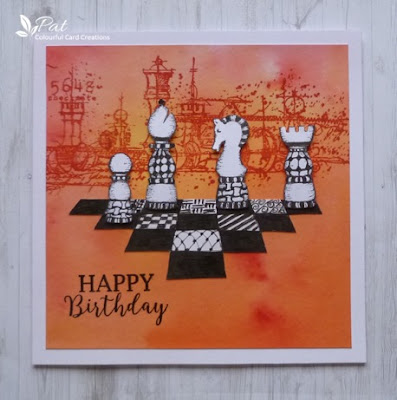 I started by making a background using Brushos and sprinkled some Scarlet Red, Bright Red and Yellow on to my gelli plate, spritzed with water and pulled the print and it covered the piece of white stencil card well.  I cut it down to fit my 6" square card and added the chess border using Versafine Satin Red Ink and then added it to my card.  I managed to find a dimensional chess board and did a tracing of it on to a snippet of white card and filled in the white squares with a few tangles and then blacked the rest of the squares using a Micron Pen.  I then cut this out and added it to the background.  I then stamped some chess pieces on to more snippets of white card using Versafine Clair Nocturne Ink and fussy cut them out.  I then did a bit of tangling on each  and added them to the chess board on the card using some silicone glue to give them some dimension.  I finished by adding a sentiment again using the Nocturne Ink and heat embossed it using WOW Clear Gloss Embossing Powder.

For those that saw my last post here and want to know what the mistake was, the embossed background has a row of hearts top and bottom and unfortunately when I stamped the snowflake on it I put it upside down without realising and didn't notice until way after the whole thing was finished.  It's funny how a mistake really stands out when you know it's there, and I hope that those that said they couldn't see it were not just being kind.  I think there was one person that said they thought they knew but didn't want to say.

Thanks for visiting my blog today and I hope I'll see you again soon. 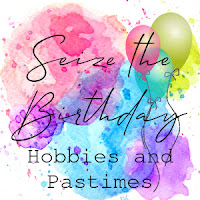 Hi all.  I have a card today for the CAS Christmas Card Challenge asking for Christmas Critters, and so I decided on the cute Mo Manning digital image of a Llasa Apso and I thought the snowflake from the Colorado Craft Co. set of stamps Big & Bold - Winter Wishes Snowflake made a suitable backdrop, and as dogs are quite excited to play in the snow I thought this sentiment from the set would work too.  I also used a very old Crafter's Companion embossing folder called A Little Bit Nordic. 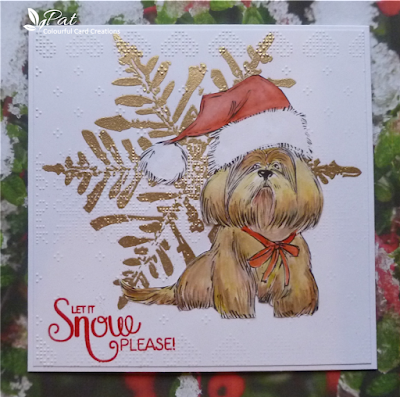 I started with a piece of white card embossed with the Nordic design and then I downloaded the digital image and coloured it with my Staedler Watercolour Brush Pens, scribbling the colour on my glass mat and lifting it with a waterbrush.  I was quite sparing with the water as the paper I print onto is only 120gsm because my printer does not like the thick card and this is the same make as the cards I use and nice and white.  I was going to leave the card at that with just the fussy cut image over the background embossing and with the sentiment, but I felt it needed something else so I decided to heat emboss the snowflake on to the embossed background using WOW Metallic Brass Embossing Powder.  I wasn't sure I would get a good impression over the embossing, but it did work pretty well.  You can see the dotty pattern through it a bit but I didn't think it spoilt the overall look.  I finished the card with the fun sentiment which I stamped using Versafine Satin Red Ink and embossed with WOW Clear Gloss Embossing Powder.

It wasn't until I picked it up for another look some time later that it dawned on me that I had made a bit of an error.  I won't point it out but will see who spots it..lol...actually I think it is more noticeable in the photo than in real life.  I asked hubby if he could see the mistake and it did take him a good half a minute so I'm hoping that whoever I send it to will not immediately spot it.

Hi everybody.  I needed a feminine card for a cousin's birthday and also the CAS Mix Up Challenge which this time is Stencil Monoprinting and is the last one until the new year, so I combined the two and used a recently bought Woodware Stamp called Going to Seed..I have been wanting to get this for ages and this is its first inking, and made the stencil monoprint using a Lavinia stencil called Laurel. 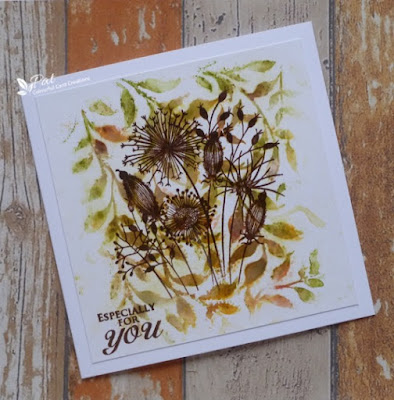 I cut a piece of white card and covered part of the stencil with some Distress Inks - Mustard Seed, Fired Brick, Peeled Paint, Vintage Photo and Spiced Marmalade, and spritzed and turned it over and pressed on to the card using a piece of kitchen towel to mop up any excess water.   I did do this process several times to try and get a good bit of colour..brown and orange seems to have predominated in the centre but  it does have the look of autumn.  I then added the stamp over the top using Versafine Vintage Sepia ink and then heat embossed using WOW Clear Gloss Embossing Powder and then did the same with the sentiment.  I cut the piece of card down a bit and added it to my 6" square card. 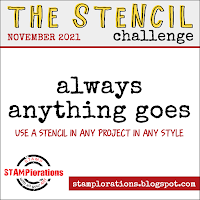 Hi everybody.  I have been looking at zentangling for a while and up to now have only done a couple of others which I will show at some future time and have got the bug..lol.  I saw an eagle with tangled feathers and thought I would try something similar.  I found a freebie outline of one and transferred it using pencil on a piece of tissue paper and then turned it on to a piece of white card and went over the lines, and although faint I managed to ink it with a black Micron Pen and it worked pretty well. 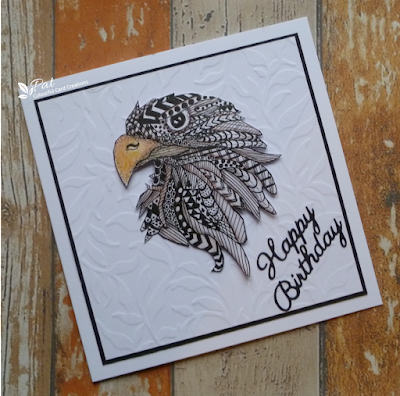 I then did the tangling just using some fairly simple shapes...dots, lines and curved shapes varying them and breaking them up with just lines on some of the feathers in between.  I think the feathers lend themselves to this treatment and I have to say I was really pleased with the result.  It is much easier with the outline to start you off, not like the clever stuff started totally from scratch, but I may progress to something more like that.
I finished by colouring it with a couple of browns and a grey to the feathers not making it too heavy but accentuated the edges of each of the feathers to give them depth, and then added yellow and orange with some brown onto the beak.  I fussy cut it out and added it to the embossed background using some silicone gel.  I already had the background made by embossing a Lavinia stencil called Laurel used for the first time, and decided to leave it white and just added a black mat and die cut sentiment backed with Stick It for ease of applying to the card.

Hi everybody.  I have an anniversary card today made with a Woodware set of stamps called Hearts Collection.  I saw this used over at Kathy K's Blog Purple Princess Diaries and I was instantly taken with the different styles of the hearts and so thank you Kathy for enabling me.  This is its first inking too. 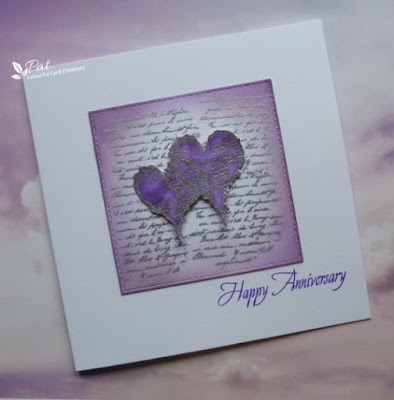 I started by stamping and heat embossing the hearts using WOW Metallic Silver Embossing Powder on to a piece of purple inked card that I had, and then I fussy cut them out and added extra ink within the hearts using Wilted Violet Distress Ink and a waterbrush.  I then cut a mat for them using a square stitched die and added some script with a small Indigoblu stamp called French Script inked and then again heat embossed with the WOW Silver EP.  I then inked around the mat, my favourite thing to do at the moment, using the Wilted Violet and added it to my 6" square white card.  I finished by adding the Woodware sentiment stamped with Wilted Violet and heat embossed with WOW Clear Gloss Embossing Powder.