I needed a couple of cards to send out..one to the winner of my recent giveaway Liz, and another to go with a smaller set of papers and toppers which I found I had just sitting unused and which I have sent to Kath, the only other lady who was interested in the giveaway, and having shown her a photo of the set she said she would like this so everyone's a winner, and it makes me feel better to think that someone is getting some use out of things that I know will just sit here for far too long, get spoiled and then be unusable.  I know I would probably have had more interest if I had not restricted it to the UK, but if I do have another in the not too distant future, and there is that possibility, I will include all overseas followers and commenters too.  I used a freebie digi colouring page with these pretty blossoms and made a different version for each lady. 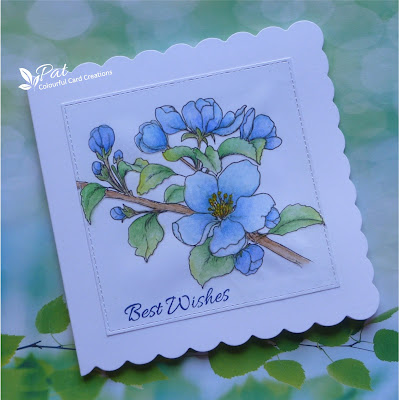 The first I coloured in tones of blue watercoloured with a set which I acquired whilst on holiday..another by Koh-I-Noor.  They are great for taking out comprising of four layers which each have six colours so twenty four in all, and they just unscrew to open out which makes them very portable.  This was the first time I have used them and I used 160gsm white paper which took the water reasonably well, buckling just a little.  I finished the colouring with some Polycolour Pencil over the top to deepen the shading which worked well.  These pencils are also by Koh-I-Noor and I have used them on several projects recently.  I finished this first card by die cutting with a square stitched die and stamped a sentiment using Versafine Majestic Blue ink before adding it to a 6" square card.

I am entering the following challenges with the above card: 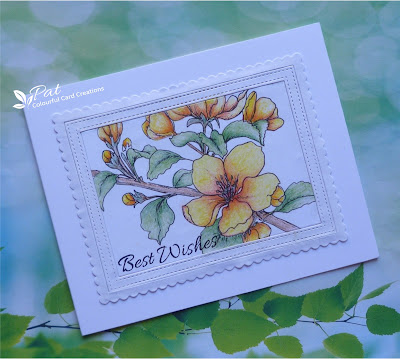 I decided on this second card to just use the pencils and coloured with tones of yellow, orange and red, and I used a couple of greens and brown and black.  I decided to use a Scalloped Stitched die by Poppy Stamps to frame this one but it didn't cut out well at all as I think I made the mistake of not backing it onto another piece of card to strengthen it before die cutting.  I tried sticking it down using wet glue and it was a disaster as it stretched and the three pieces comprising the centre and a double stitched inner frame followed by the outer scalloped frame would not match up as in cutting this frame I also had to cut into the coloured portion of the design and so it was crucial to get it to match up properly.  I ended up cutting another frame and placed the new pieces over the top cutting the scalloped edge back which made it easier as no matching of the scalloped edge required...I did use double sided tape this time and although I lost some of the flowers, more so at the top, it works OK.  I absolutely hate giving up on something and I was so pleased with the colouring I didn't want to start again.  I finished this one with the same sentiment as above but using Versafine Clair Nocturne ink, and this time I placed it onto a 7" x 5" card.

Hi everybody.  I have a late entry for the CAS Christmas Card Challenge and the theme this time is Pine so I decided to use a pinecone branch from a set of stamps called  Robin the Spruce by Chocolate Baroque.  I also used a very old freebie embossing folder with some Christmas words on it. 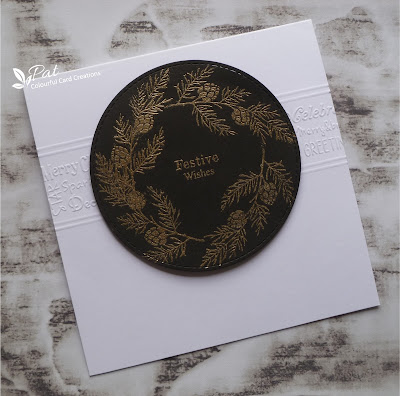 I started with a piece of black card on to which I stamped the circle of pine branches using Versamark and heat embossed with WOW Platinum Embossing Powder.  To get the circle the right size to fit my stitched circle I pencilled round the die onto the black card and then using my Misti I placed each one to make the circle and as this is a CAS challenge I didn't want the circle to fill to much of the white space.  I did do a bit of practising on some copy paper before doing it on the card, but it still didn't quite work, as getting four in a circle was a bit of a tight fit, and the last one I had to ink just part of the stamp..not perfect but I decided it looked OK.  I then added a sentiment to the centre using a stamp from the same set, and I die cut it and backed it with a piece of foam so that it would have a bit of dimension.  I then used the strip embossing folder on the base card, turning the 6" square card so that it had the fold at the top so I could wrap the folder around the card.  I also added a couple of scored lines above and below the embossing and then added the circle to finish the card.

I am also entering the following challenges:-

Hi all.  I'm back with a masculine birthday card using a feather stamp from a set by Art Journey called Nature Flowers, and I also used a set of XCut hexagon dies and an embossing folder by Sheena Douglass from her Textures range called Distress which I have had for quite a long time.   I decided to use the Joseph's Coat technique which I have probably only tried about once before and is a form of emboss resist which is the theme this time over at the CAS Mix Up Card Challenge, this month being a mixed media challenge.  The card features ink blending, stamping, heat embossing, dry embossing and die cutting. 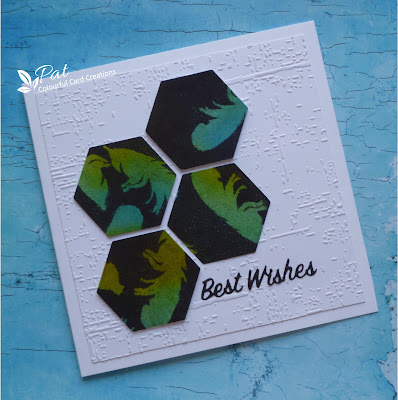 I started by covering my piece of card with three Distress Inks added using a blending tool.  It is best to apply them heavily and choose nice strong colours.  I chose Mermaid Lagoon, Mustard Seed and Cracked Pistachio.  I then stamped the feather, first making sure the inks were perfectly dry, using Versamark and heat embossed using WOW Clear Gloss Embossing Powder.  I then got out my Versafine Clair Nocturne Ink and rubbed the pad all over the piece, and then using a piece of tissue I cleaned off the feather images which remain trapped under the clear embossing and surrounded by the black inked background.  I then die cut out four hexagons from it.  I decided to use an embossed background and found a Sheena Douglass Texture embossing folder called Distress and added this just left white.  I finished by adding a die cut sentiment cut from a piece of black card.

I have several anniversary cards to send in the next few weeks and I had a left over digi stamp which I printed off quite a while ago, one of a set I bought from Beccy's Place and the set is called Girls' Night.  I decided to colour it with my Polycolour Pencils by Koh-i-Noor, bought recently whilst away on holiday and which I really love.  They leave a lovely sheen and the colours are quite pretty too.  There are only twelve but perhaps I will add some colours in the future. 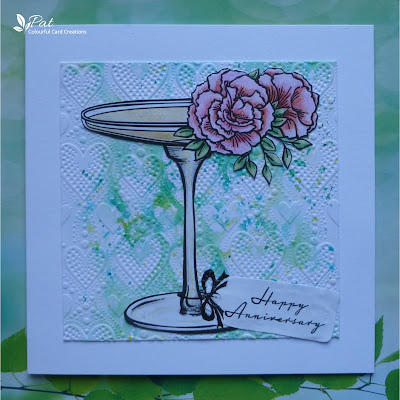 I started by colouring the image and then fussy cut it out.  I then added some Sea Green Brusho to a piece of white card to fit a 6" square card with about an inch around the edge and spritzed it fairly lightly and when dry I used a Leonie Pujol heart embossing folder just to add a bit more interest to the background.  I had to emboss it twice to cover the piece of square card.  I finished the card with a sentiment stamped on to a label shape using Versafine Clair Nocturne ink, to which I added a bow attached to the glass hand drawn using a Black 01 Micron Pen.

I am entering the following challenges:-

Hi everyone.  This is just a quick post to announce the winner of the giveaway of some papercraft items, a stamp and an embossing folder and also the magazine they came with.  There were only two people who expressed an interest and the winner is ......LIZ - Crafty Sunflower.  I will be in touch with you tomorrow Liz to get your details.