Christmas Circles - Robin Amongst the Holly

Hi all.  This card features a Chocoloate Baroque stamp set of two circular designs, one with candles and foliage and this sweet little robin sitting in the holly.  I also used a Crafter's Companion Embossing Folder called Entwined Holly.  It  is the 25th of the month and so time for Mo's Rudolph Days Challenge which runs until the end of the month, and a great opportunity to get some cards made every month.  I will try and do better this year than I did last! 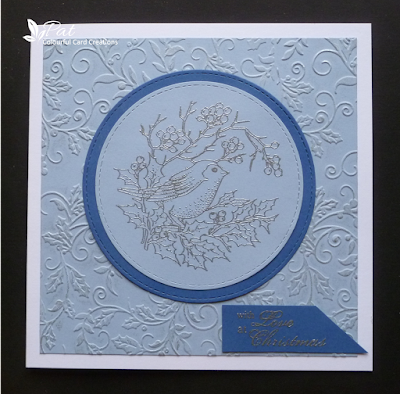 I started with a piece of blue card just under 6" square and embossed the Entwined Holly on to it, doing it twice to cover the square piece of card.  I then highlighted the pattern with some silver gilding wax, very lightly but just enough to bring out the pattern.  I then adhered this to the white base card.

I then die cut a circle using a stitched die from The Works and stamped the robin using Versamark and heat embossed using WOW Silver Metallic Embossing Powder.  I then cut another slightly larger stitched circle from a darker blue and matted it to the stamped topper.  I finished the card with a sentiment also stamped and heat embossed with the Silver Metallic EP on to the darker blue card and cut it into this angled shape and added it to the card as you can see. 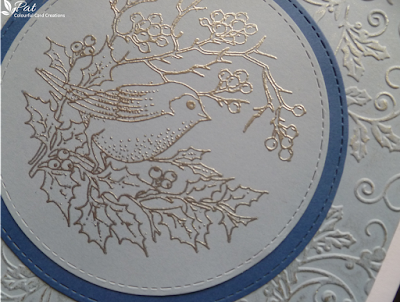 The gilding is very shiny in real life but is difficult to see but I think you can just make out a bit of it on the raised pattern.

Thank you for your visit today and I'll see you again soon. 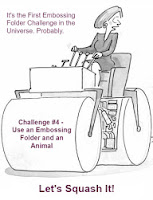 Bags of Style in Navy and Cream

Hi everyone.  This card uses a Creative Expressions set of stamps which hasn't seen the light of day for a very long time and features some lovely handbags with frames and sentiments.  I also used a stencil from a set by Craft Sensations which I bought from The Range, and this particular set is Art Deco, with five designs and this is one of them. 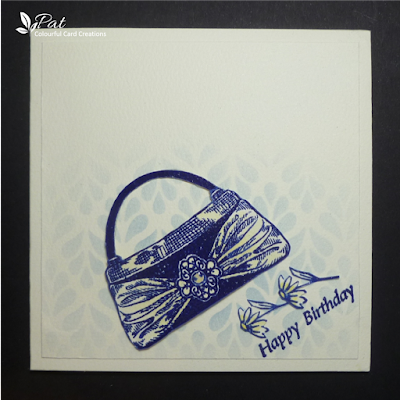 I started with a piece of cream card and using a brush I added the design very softly using Faded Jeans Distress Ink.  I then stamped the handbag onto another piece of cream card using Versafine Majestic Blue ink and heat embossed it using WOW Clear Gloss Embossing Powder and fussy cut it out.  I finished the bag with a very watery soft wash of Adirondack Sunshine Yellow ink onto the piece across the front of the bag and also on the stone in the centre of the ornate badge, and then added some Glossy Accents over this central stone.

To finish it I also stamped the sentiment and two little flowers from a set of florals which came with a magazine sometime last year I think, using the same blue ink and with a little wash of the yellow ink to the petals, and also fussy cut them out, and added theme to the stencilled layer after I had stamped the sentiment.

I finished by adding the handbag using some silicone gel to give it a bit of dimension.

Thank you for visiting here today and I hope you will visit again soon. 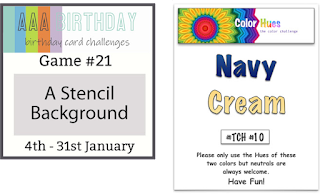 Hi everybody.  I'm back with a Hobby Art Stamp set called Otters and it has some really lovely images and as I needed a masculine card I thought it would be good to give it its first stamping for this card.  I love otters and when I saw this set I just couldn't resist.  Quite a few years ago our son adopted an orphan otter pup in my name as a Christmas gift and they sent me occasional photographs of how it was doing.  It was on the Isle of Skye and I so wanted to go and visit the place but it being a long way to go I never managed it and within the year they released it back into the wild which was great.

Anyway here is the card.  I have made it with the CAS Mix Up January Challenge in mind the theme of which is Splatters.  I used stamping,  heat embossing, stencilling, ink blending and watercolouring. 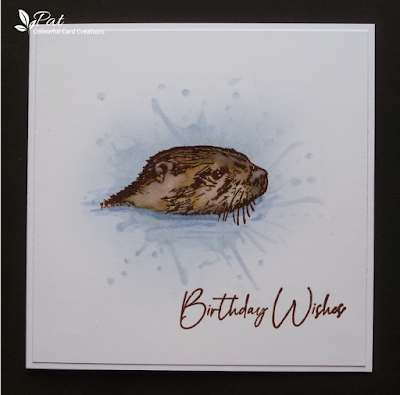 I started by using a A Special Touch Of stencil called Splats which I have had for ages but haven't used that much.  I stencilled using Stormy Sky Distress Ink and decided to extend the largest splat a bit to accomodate the size of the otter so started by making a roundish shape using a brush for a light look and when I was happy with the size I used the stencil to give the splatter shape adding extra of the little round water droplet shapes.

I then stamped and embossed the otter using Versafine Vintage Sepia ink and heat embossed with WOW Clear Gloss Embossing Powder.  I then water bleached the blue colour out of the otter and watercoloured using a waterbrush with Vintage Photo, Walnut Stain and Black soot DIs.  I finished watercolouring with a bit of Chipped Sapphire and Blueprint Sketch DI to the water around the front of the image to give a little movement and shadow to the water.  Finally I added a sentiment stamped with the Vintage Sepia and heat embossed again with the Clear Gloss EP.

Before I go I would like to introduce Hannelie, a new follower who I think many of you will already know and who makes really beautiful cards in more of a CAS style and does them brilliantly.  If you haven't come across her you will find her blog here.

Do go and visit the CAS Mix Up Challenge too and perhaps join in as it is open until the 24th so still time to get an entry in.  Thank you for visiting my blog today and I hope to see you again soon.

NBUS Challenge - No. 22 where we use our Never Before Used Schtuff.
Happy Little Stampers January Stencil Challenge - Anything Goes.
Stamping Sensations January Challenge - Favourite Stamps (the otter is new and a new set is always my current favourite).
AAA Birthday Challenge - No. 21 A Stencil Background.
The Male Room Challenge - No. 146 Animals.  (so pleased to get an Honourable Mention) 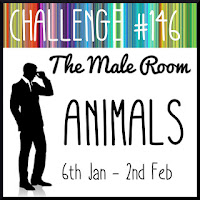 Hi everybody.  I am so pleased to be doing a GD spot over at CAS Christmas Challenge, especially as it is the first one of 2021 and the theme for this first challenge is Silhouette.

I used a set of three silhouette dies to make this circular bauble shaped winter scene which came free with a magazine probably more than a year ago and I don't think they have been used before. 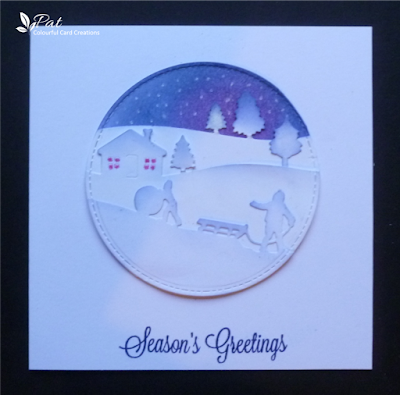 I used Distress inks to the base layer to add the colour to the sky with Chipped Sapphire and Blueprint sketch and also a bit of Picked Raspberry, and added the stars using a white gel pen.  I then cut each of the three different dies and added some of the combined blue inks which were left on my ink blending tool to add colour to the different silhouettes in varying degrees, and also used a bit of pink with the other end of my pokey tool which has a flatter end of about the right size, to put ink on the miniscule windows.  I used a bit of repositionable glue runner on the backs to hold the four layers together whilst I die cut them with the stitched circle die.  I have to say it was asking a lot even of my Gemini and where they were the thickest it would not easily cut so I then did them one at a time, using the bits of each it had cut to line it up with the die, which worked OK.

Unfortunately the light was not the best when I took the photo and there is a bit of a shadow over the left side making it look like blue ink on the snow, but I only inked very little of the edge of each layer and partially over the trees house and figures.  I did take off one of the trees from the top layer and cut it down a bit and added it on the end of the second which has the house to give that layer more interest, and I then added the sentiment using Versafine Majestic Blue ink.

The CAS Christmas challenge is open until the 24th of the month and you will get lots of inspiration from their great Design Team so I hope you can visit and play along.

Anyway thanks for coming over to my blog today and I hope to see you again soon.

NBUS Challenge - No. 22 Where we show our Never Before Used Schtuff.

Hi everyone.  Here is my selection of cards, one for each month of 2020...well not quite..lol. 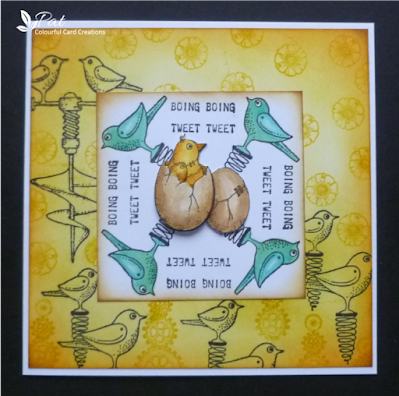 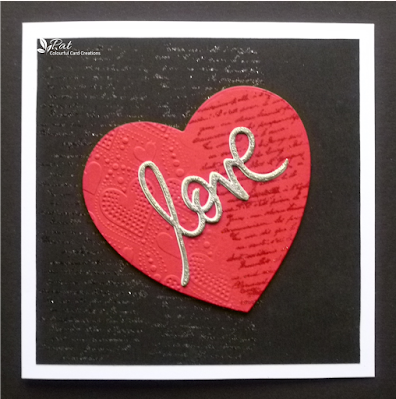 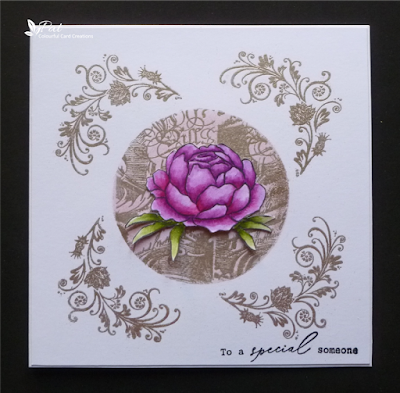 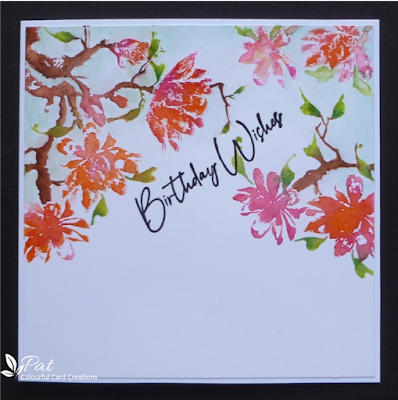 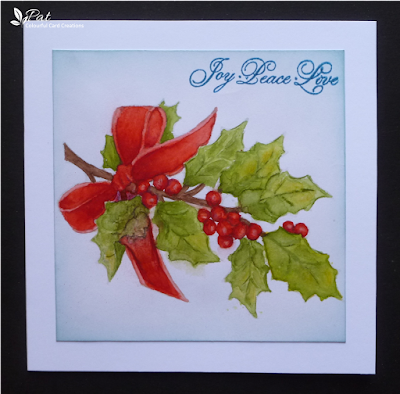 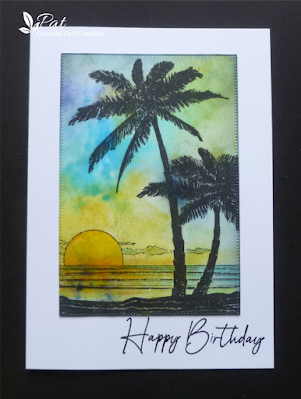 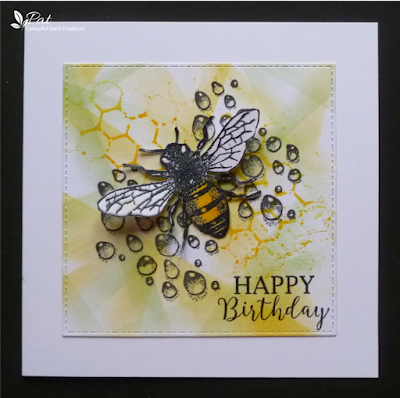 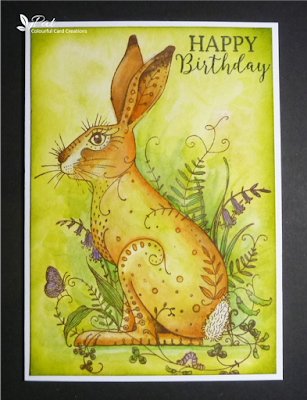 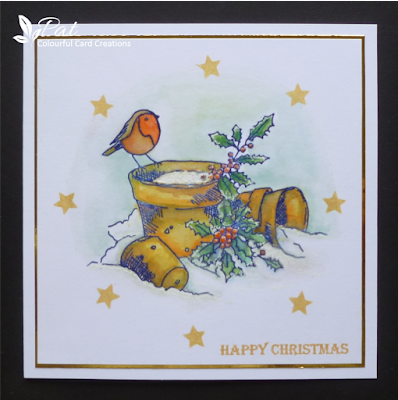 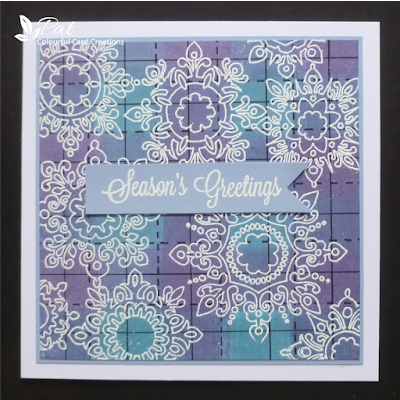 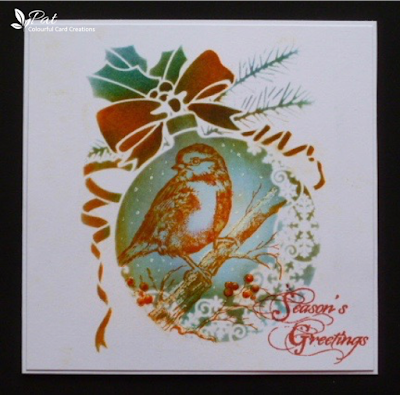 There are a few extras as I have included my Twofer entries for June and July, and also an extra Christmas one to finish with.  This was from October and I couldn't choose between the hare and this bauble using my favourite stencil for this year, so I have added it in at the end.

Thank you for all your visits to my blog throughout the year and I would like to wish you all a very Happy New Year and hoping it will bring better times for us all.