Hi all.  Things are returning to normal now after a wonderful holiday in France.  I was hoping to be able to keep up with some commenting whilst away, but I'm afraid it very quickly went wrong as wifi was a bit variable to say the least, so I have a lot of catching up to do.

I made this card for one of the younger members of our extended family.  It is another stamp which is getting it's first outing, and I also used some LOTV papers and a sentiment stamp which came free with a magazine. 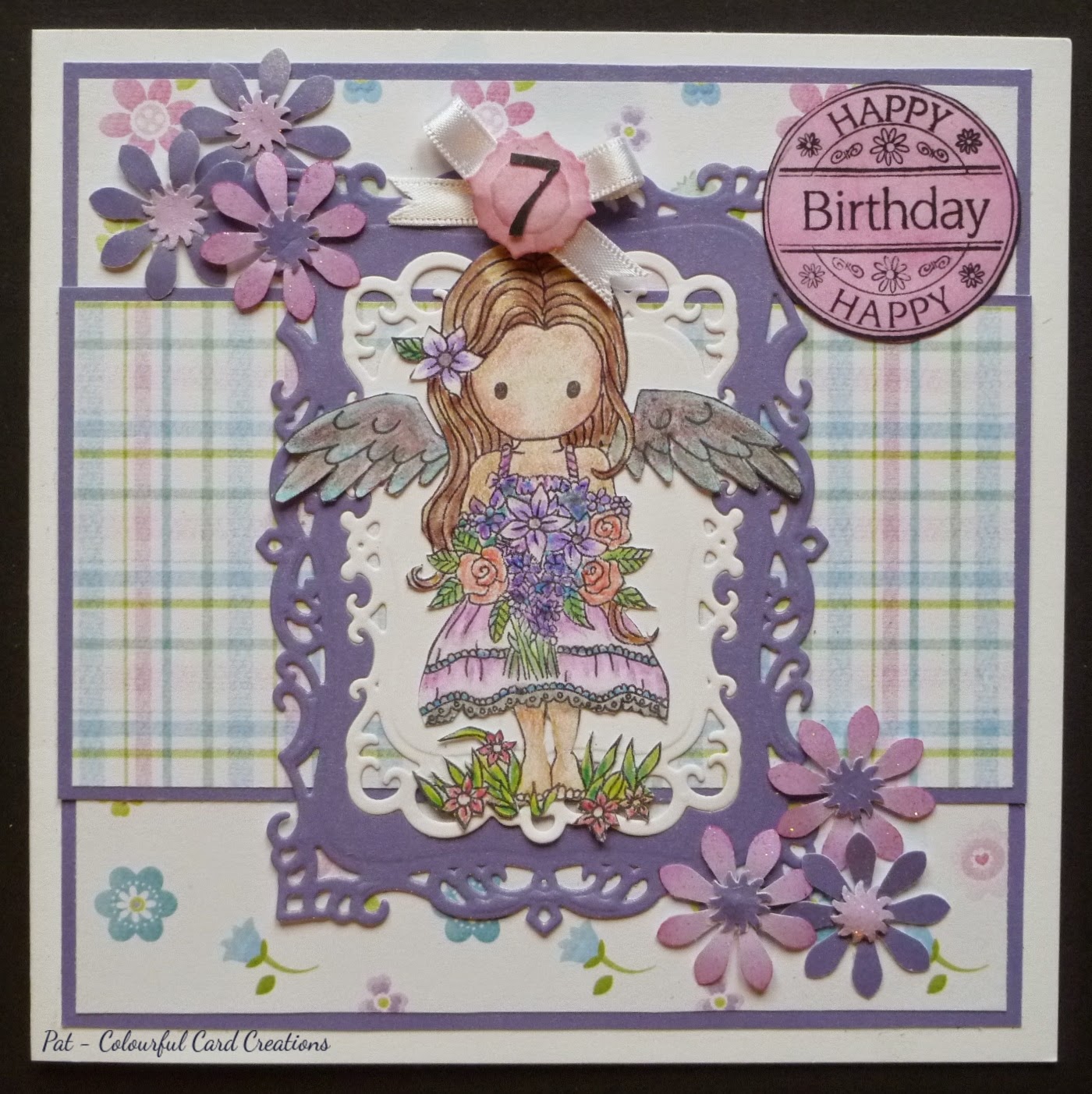 I used two different snippets of this paper which I backed with Purple pearlescent card, and then cut two mats in purple and white using my S/B Decorative Elements - Labels Eight, the middle two dies.  I cut the purple one as a frame, and then cut the smaller die in the white which makes them fit together like one layer.  I stamped the Angel with Black Archival ink and then coloured using my Spectrum Noir pencils and after cutting the image out adhered it to the mat.  I also used a little Perfect Pearls - Pewter, mixed with water, on the wings and flower centres and on bits of her dress to add a little sheen which doesn't show up very well in the photo, and also the wings look rather dark.  With hindsight I wish I had used just the mica powder and water on the wings so they would have stayed whiter.

I finished the card by punching some flowers using a very old pair of punches from Dovecraft and some snippets of pink and lilac glitter card.  I used a narrow piece of white ribbon for a bow and then stamped a 'seven' with Black Archival, on to a mat cut from a S/B Labels Thirty Two set using the smallest die, and before  attaching it to the centre of the bow I inked with Distress Ink Picked Raspberry.  I used the freebie sentiment again stamped with Black Archival and inked with the Picked Raspberry, both used snippets of white card.

Thanks for dropping by.

Pixie's Crafty Workshop - Week 143.  I used lots of snippets on this card which means I will certainly be allowed through the gates this week.
Simon Says Monday Challenge - Stencils and Stamps.  If I have interpreted this correctly you can use one or the other or both.
Cuttlebug Mania - Anything Die Cut.
Lili of the Valley - Pretty Papers.

Hello everyone.  This is another scheduled post.  I got the idea for this card from Pinterest and adapted it for this card.  The original had flower shaped apertures with patterned paper behind and this led me to think of circles with paper behind and then hearts stuck within.  I used my Xcut circles  and my Nellie Snellen Multi Frame hearts dies.  I embossed the hearts with a Cuttlebug EF - Divine Swirls, and the outer embossed layer was a Crafter's Companion EF - Regal Damask. 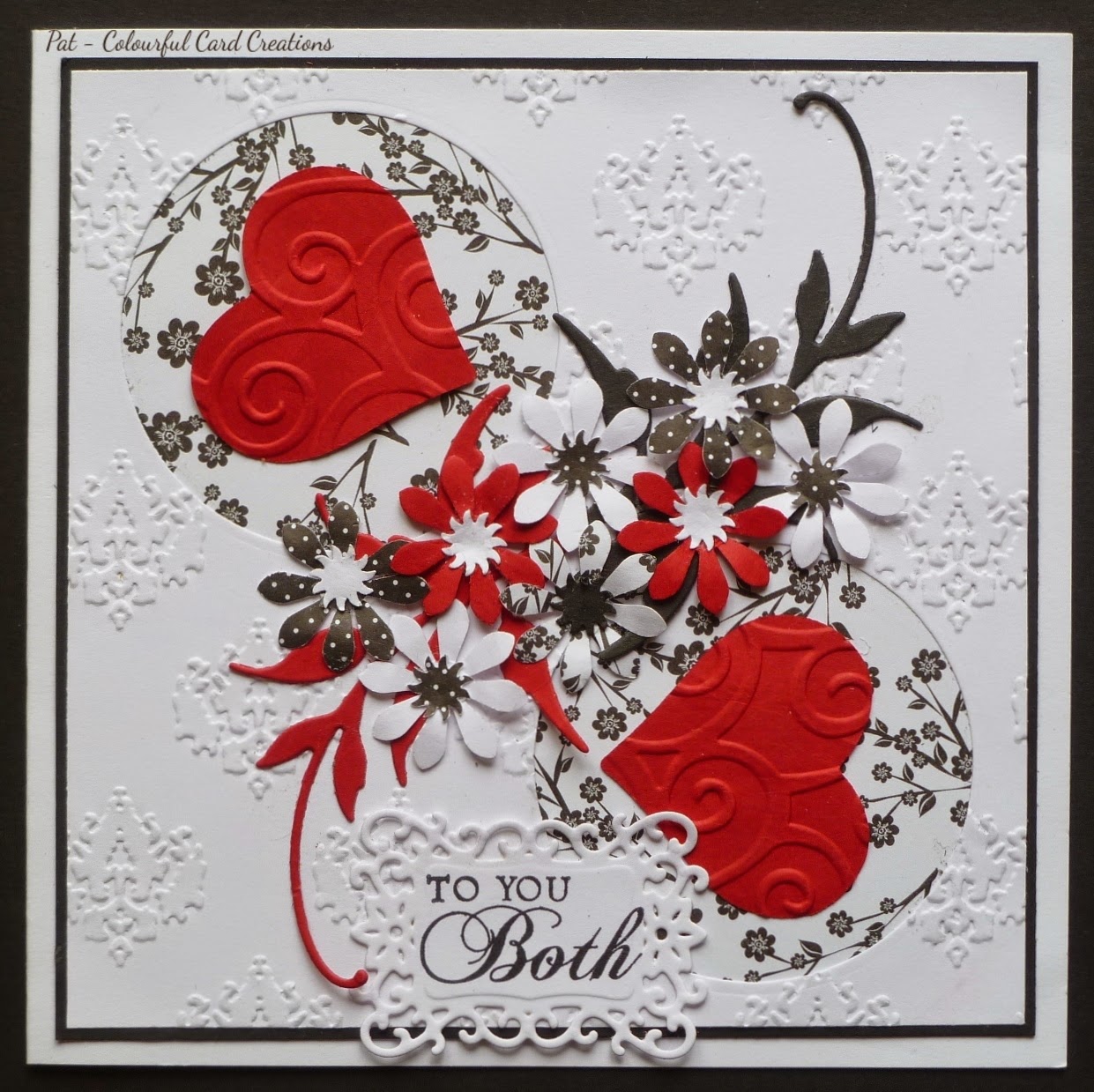 The paper was snippets from a Papermania pad.  The flowers were also punched from snippets of different papers from this pad together with a few white and red punched flowers, and then a Marianne Creatables die - Forest Branch was used for the red and black foliage behind the flowers.  I finished by stamping the sentiment using Black Archival on to a mat made using the smallest die from the S/B Labels Eight.

Hi there.  This is a scheduled post as I'm busy at the moment, so please forgive me if I don't get to visit as often as I would normally.   I have a couple of birthdays coming up and I have this embossing folder Cherry-licious by Crafter's Companion which I haven't used yet (hereafter known as NBUS - coined by Darnell of djkardkreations).  I decided to emboss on to a snippet of white card and then colour using my Spectrum Noir Pencils which are my favourites at the moment.  After colouring I used an Adirondack Pink Sherbet ink pad and some blending foam to gently colour the background. 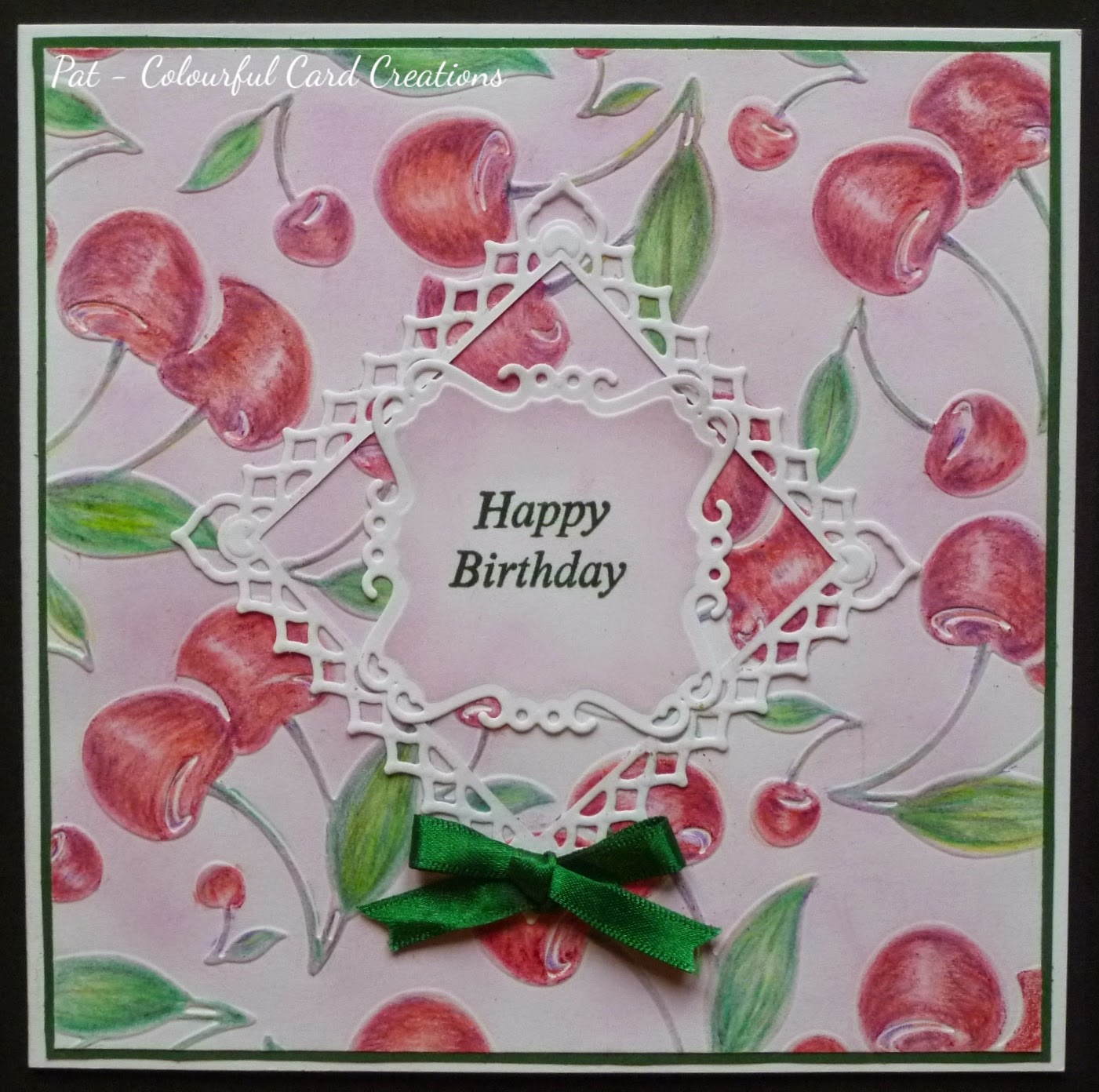 I then made a frame using a snippet of white card and a S/B Captivating Squares die, the second largest, and I cut out the centre, and then cut the next size die to fit within that.  I finished by stamping the sentiment in the centre using Black Archival ink, added a bow and mounted on to green card then on to the base square white card.

P.S  I am back in the blogging swing again and I would like to enter this card into the NBUS Challenge which is running over at Darnell's blog at the moment and has only a few days left to run, so do go take a look.

Hi all.  This is a scheduled post as I am busy still, so please forgive me if I don't get round to visiting quite as often as normal.  This telephone is a NBUS Cottage Cutz die.  It comes as one 4" x 4" plate and as most of it is black I used a snippet of black card across the whole plate, and then the gold bits were a snippet of gold pearlescent card which I ran through the machine after.  I think what makes this so fiddly is that the plate does not have any holes to help release the card from the die, and some of the components are very small.  Anyway I did like the finished result. 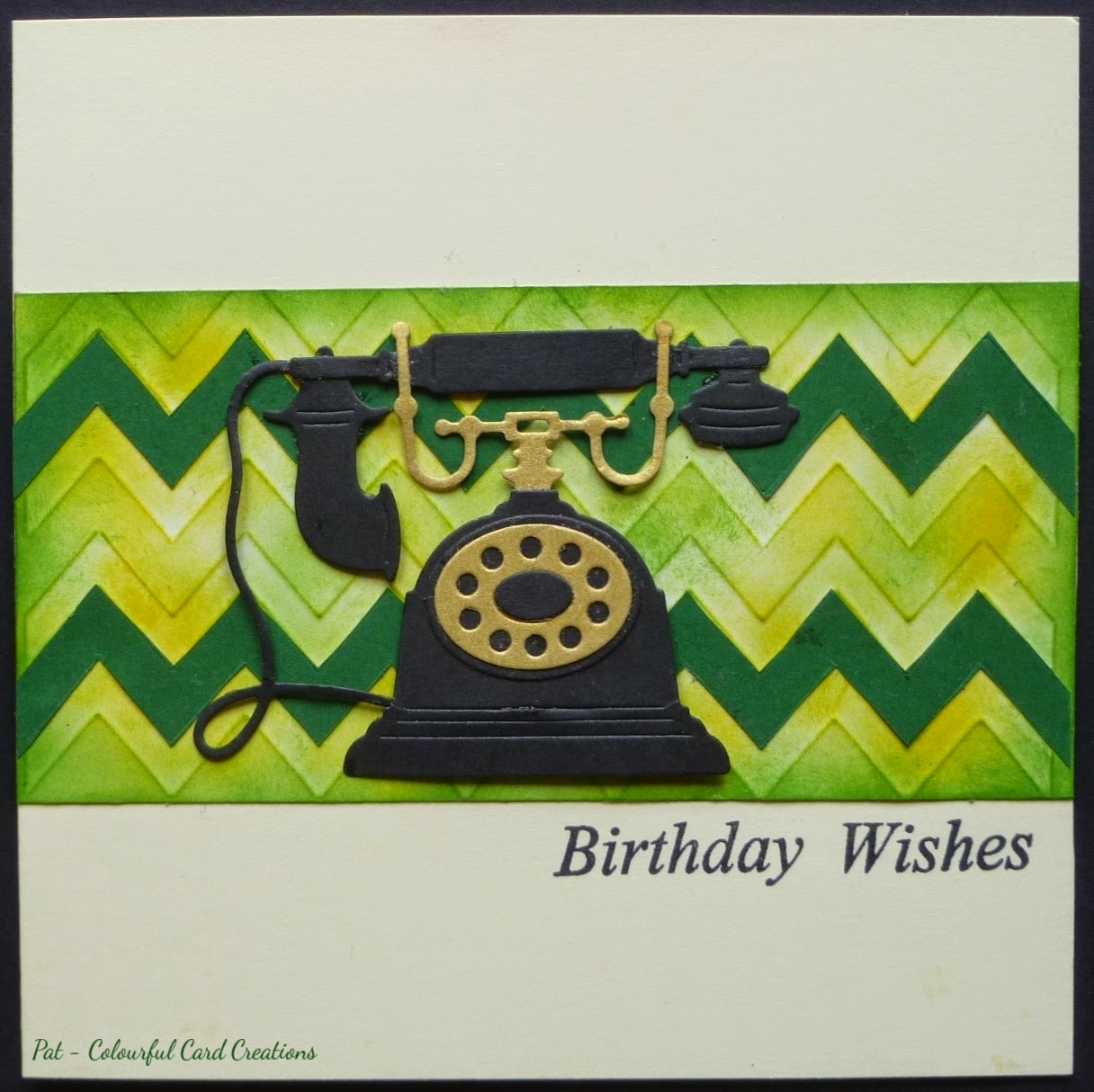 The background was a snippet of card which I embossed by running through my machine using a chevron stencil from Creative Expressions, and then inked over it with Distress Inks in Mustard Seed and Mowed Lawn.  When putting it together I thought the telephone merged into the background too much so I embossed part of the stencil again in a snippet of dark green card and then cut out two strips and attached them to the background as seen here.  Finally I stamped the sentiment using a Black Archival ink pad.  The base card is a square cream card, but actually looks more like white in the photo. 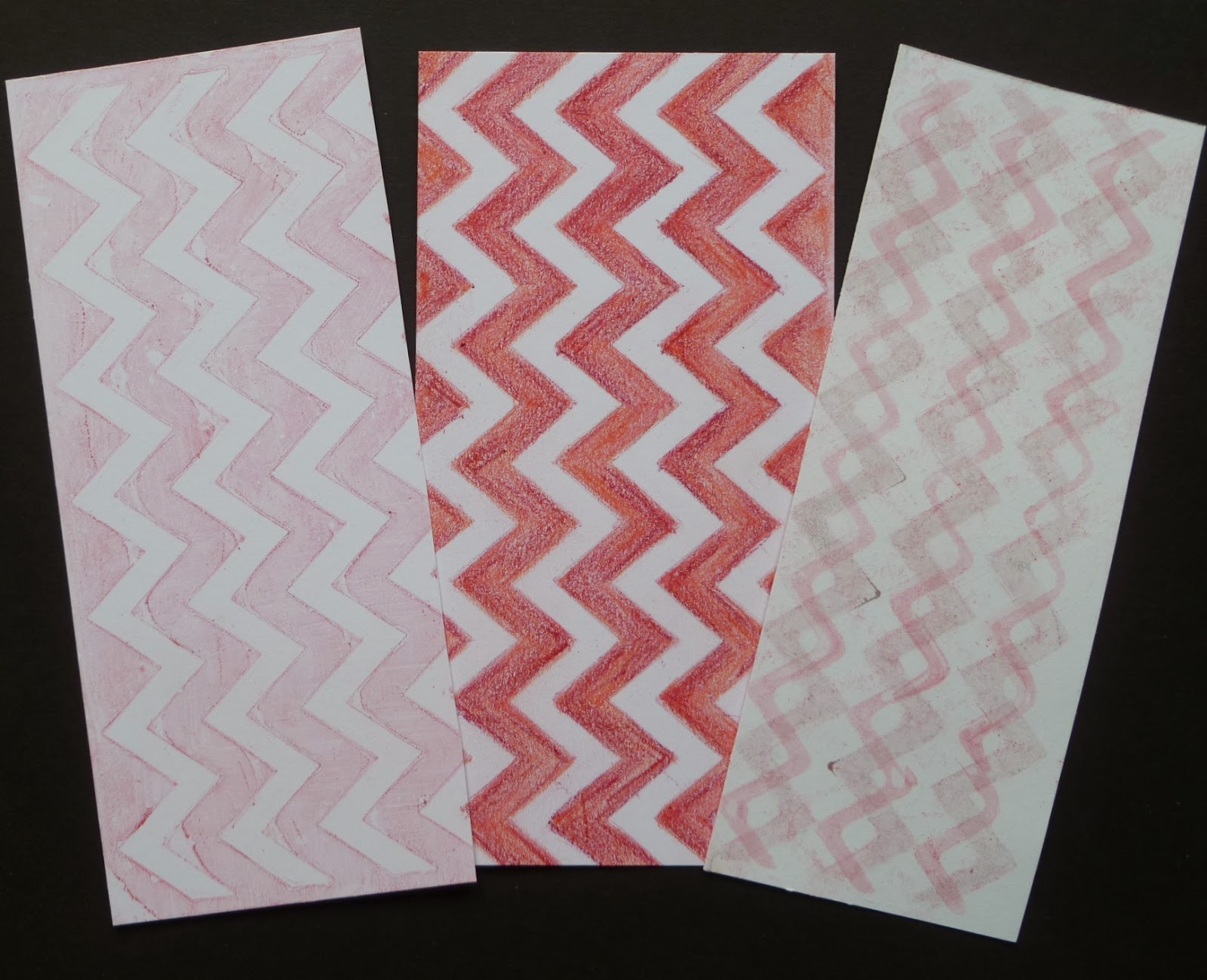 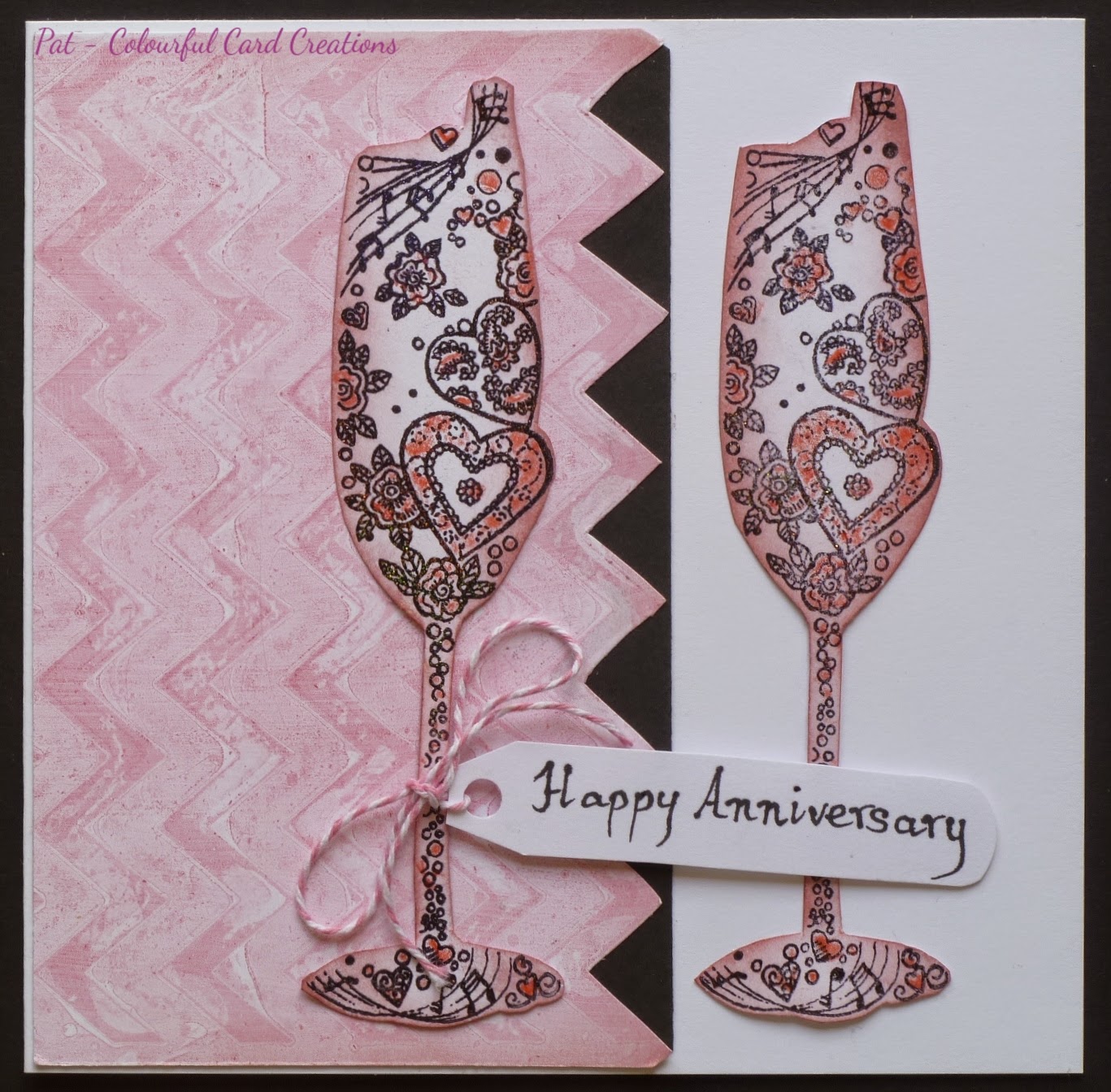