Hi everyone.  Today's card is a birthday card which I made for a friend.  I do however have to apologise to her because I 've only just realised that I forgot to put a sentiment on the front.   Luckily I did put an insert inside with 'On Your Special Day', so Happy Birthday, Marilyn.

For the card I used a set of stamps which have already had an outing on here.  It is a set by Sheena Douglass called A Little Bit Oriental.  There is a large Koi, which I used last time, and a smaller Koi which I stamped twice for this card, together with the floating Lilies and the second largest Water Lily, used three times.  The other two stamps used were a couple of the ripple effects. 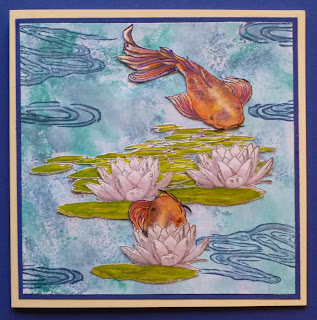 I began by selecting my usual square card in cream - as you can probably see this is my favourite shape at the moment.  I decided to back the focal layer with a dark blue which I obviously did at a later stage.  I then took a piece of white stamping card and covered this, using the acrylic block technique, with three colours of ink, namely Tumbled Glass and Peacock Feathers Distress Ink and Memento Nautical Blue.  I then took some snippets/scraps of white card and using Memento Tuxedo Black stamped out the two Koi and the three Water Lilies and coloured them with Promarkers in a selection of about six colours.  I only have a pack of eleven colours with a blender so I don't have a great deal of choice. but I manage.  I then returned to the background after decided where I would place the Koi and Water Lilies and then stamped the water ripples in Memento Nautical Blue.  I decided when placing  the Koi that it might be quite fun to have one fish with it's head out of the water so I cut that one down and placed the Water Lilies around it.  I then, as mentioned earlier, mounted this on dark blue card, and then mounted that on my cream base card.

Thank you to everyone who stops by, and hope you all have a good week.

I have decided, as this uses a few snippets, to enter the challenge over at Pixies Crafty Workshop.
Posted by Pat at 11:24 am

Hi Pat, beautiful card ! Great background. I just read your comment regarding difficulty loading my blog on your tablet (it's OK on mine). I've changed the number of posts showing from 10 to 5, it might make it easier to load? If you could let me know, I would appreciate it ! Have a great day, Shirleyx

Thank you so much, Pat --- I love it! When I opened it this morning, I just had to send a comment to your October post featuring the Koi Carp Stamp---now that you've put a picture of the card you made for me on here I can say that it's better without a sentiment on the front because now I can find a way to display it on my dresser so that I can enjoy it every day ---- "A Koi is for life---not just for Birthdays!" ;) --- With love Marilyn. xx

Wow you may only have a few colours to use but this is a fantastic card. I'm not suprised your friend wants to keep it on show every day. Hugs Mrs a.
p.s. We could do with some koi carp in the playground duck pond!

This is so lovely...beautiful colours and stamps...
Wonderful snippets card.

Wow, this is fabulous! So realistic you want to dip your fingers in the water :) And your colouring is brilliant, amazing what you've achieved with a few Pro Markers - the sign of a good artist!

Great to see you in the Playground again too.

Beautiful and unique card. Think it's fine without a sentiment on the front - it's COOL!

Stunning card! I love how you created your background...gorgeous coloring, too!

Awesome effect with your water done with the acrylic block technique (which I'm trying to learn!) Your water looks very realistic & I love your idea of the Koi with his head just peeking out. Lovely colors and it looks wonderful as it is - no sentiment. I'm sure your friend just loved it as did I. TFS & for your sweet comments on the 3 Twenty Stamp posts. Hugs

Great snippets card, Pat! I love the coloring and the playful fish sticking its head up out of the water!! I think a sentiment would have spoiled the picture; I often leave them off my card front if its full of images. I think she will treasure this!! Hugs, Darnell