Today I'm back to Christmas again, so thought I would feature that lovely Memory Box Snowflake Corner Die which I was lucky enough to win last week.  The stamps are from Chocolate Baroque - the first is the Poinsettia which I don't think is available any more, and the second is the Snowflake Shadow.  This is approximately 6 inches square and is good on it's own or as a background. 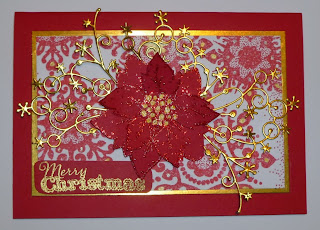 This was quite a quick card as I already had a piece of the background from the last time I used the stamp, so I mounted this on a piece of Gold Mirri Card which I stuck onto a piece of red card measuring 6 x 4 inch when folded.  I used the same red card for the Poinsettia, which I stamped with Versamark and heat embossed with WOW Red Glitz EP, and for the centre I used a Gold Uni-ball Pen.  I have to admit I did make the flower a bit smaller by cutting out the central part and adding some bits of the outside petals behind in order to keep the flower a bit smaller.  The background is so pretty I didn't want to cover too much of it.  I also coloured the background in a little with a gold and silver pen which I dont think shows up all that well in the photo.  Lastly I used the Memory Box Snowflake Corner Die but used as flourishes.  I cut three from the Gold Mirri Card, and the one in the middle I cut down a little.  The sentiment which I stamped and heat embossed with WOW Gold EP, is from a freebie set which came with a magazine.

Thanks for stopping by to take a look today.

I've decided to enter this card in a challenge over at Pixie's Crafty Workshop.
Stamping Sensations have a Christmas challenge so I am entering that too.

That's really nice. It looks quite opulent. I think it would work quite well on dark green or even a black background. Can't wait to see what Christmas card we'll get. ;-)

I'm afraid I wasn't able to visit last week and welcome you to the Playground, your chess card is awesome! And yes you are being too hard on yourself Pat - but we crafters/stampers seem to always look for the errors in our creations firstly.
This is a beautiful card Pat and you really should enter some challenges - it has a gorgeous layout and the flower and gold die cuts are so lush and luxurious! Hope to see you at the Playground again soon xx

This is just marvelous use of that snowflake die on this gorgeous card (and you used a snippet too! Better dash to the Playground, fast!). Love the poinsettia & was interested to read you gave it a bit of a trim. Love those CB stamps in the background. Lovely & TFS

This must look even more beautiful in real life, Pat! It's stunning! I agree with you about not want to cover up too much of that beautiful background!! See you at the Playground!!Hugs, Darnell

Hi again Pat! What a stunning card, so opulent. And such a great way to use the corner die cuts as flourishes. I have that die too and it never crossed my mind to do that!

Hi Pat, What a gorgeous festive card, I love the way you used the die cut and the lovely red glitter embossing on the flower.
I have just had a trawl through your blog posts and love your cards. I have also seen some of them on the Chocolate Baroque site. Nice to see your work in the Snippets Playground too.
I have just joined as a follower so hope to be back again soon.
Jean x

Great use of snippets...your card is lovely!

Such a pretty card, Pat, the flower is simply stunning! And a very creative use of the corner dies. Thank you for sharing it with us at Stamping Sensations this month.