Hi All.  I'm afraid my Christmas stamp box does not contain much, other than a few baubles, a tree, a deer, some wintry trees which I haven't used because they didn't speak of Christmas to me, but perhaps they may come out, and these two stamps from Chocolate Baroque.  The other I have used quite a lot, and this one is having it's first outing.  I have made two cards with it and thought I would show them both on this post because the techniques used make them look, in a way, like totally different stamps.

This card uses the heat resistant acetate heat embossed using WOW Black Twinkle EP, and coloured using Promarkers.  Unfortunately I only have a few Promarkers and some of the colours I thought looked a bit pale when applied to the acetate, but actually they seem to show up better than I thought they would. The colours I used were Ruby Red, Forest Green, Amethyst, Bright Orange and Indigo Blue.  The snowflake on the right hand side was originally green and I put some red over the top because I didn't like having two greens next to one another, and this makes it look a bit reddy brown.  I think some of the other colours might have been ok if I had been patient and waited for the colour to dry and just added more layers.  I finished by coating the back of the acetate with Sky Blue and made it look mottled by just adding some more until it puddled a bit.  I finished the card with a white mat edged with a Nellies Scallop Border Die and added a  piece of bluey green card to the top and bottom of my usual square white card.  I finished the card with silver sentiment. 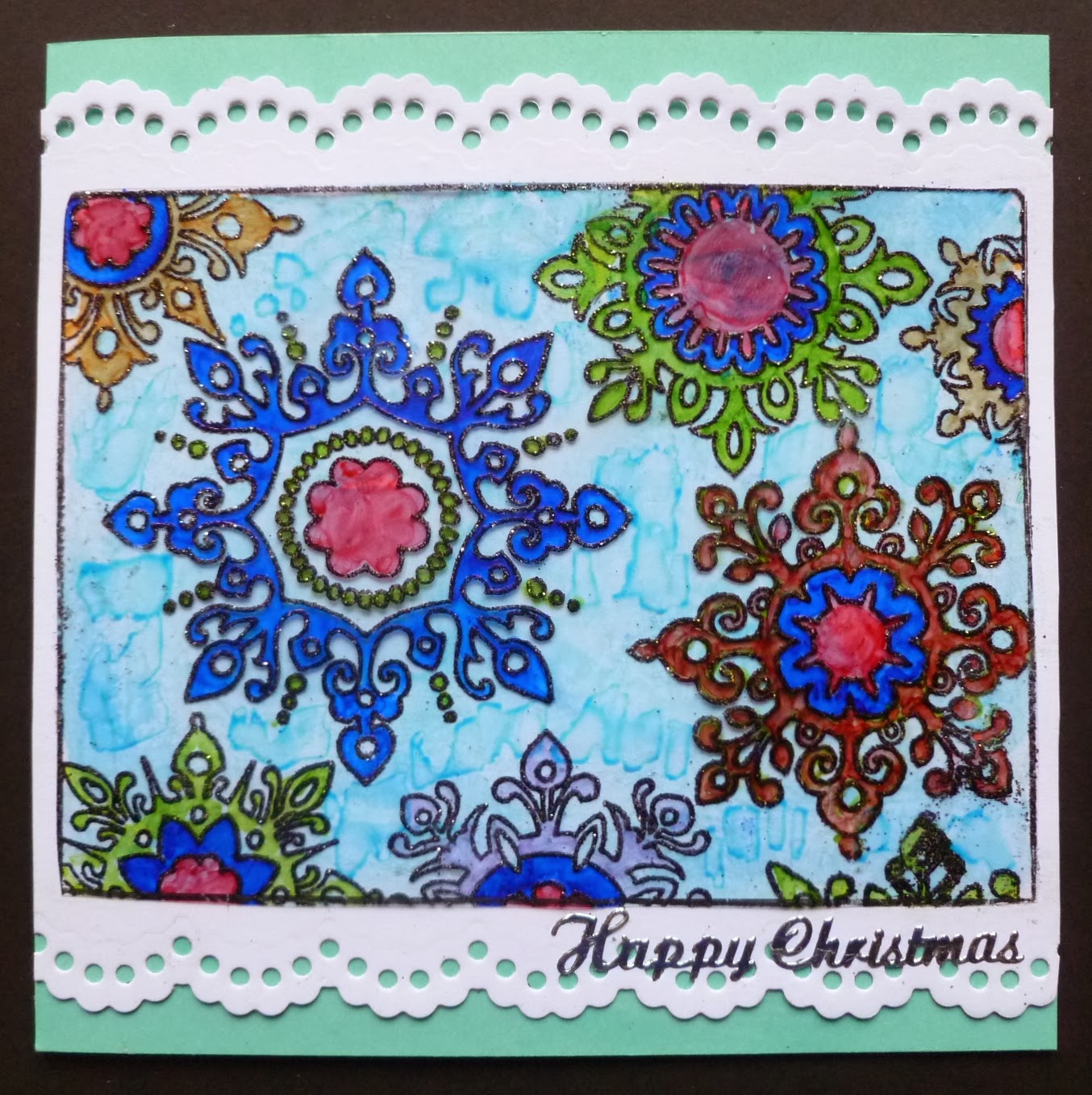 On the second card I stamped and heat embossed the image with Papermania Seafoam White EP and then used various inks randomly over the top, and finished by filling the snowflake in with one of the inks.  On both cards I only used part of the stamp and on this card I didn't get the best stamping result, but I decided that I would colour it and see how it looked, and when finished I decide that although the stamping fades out in places it actually works ok. 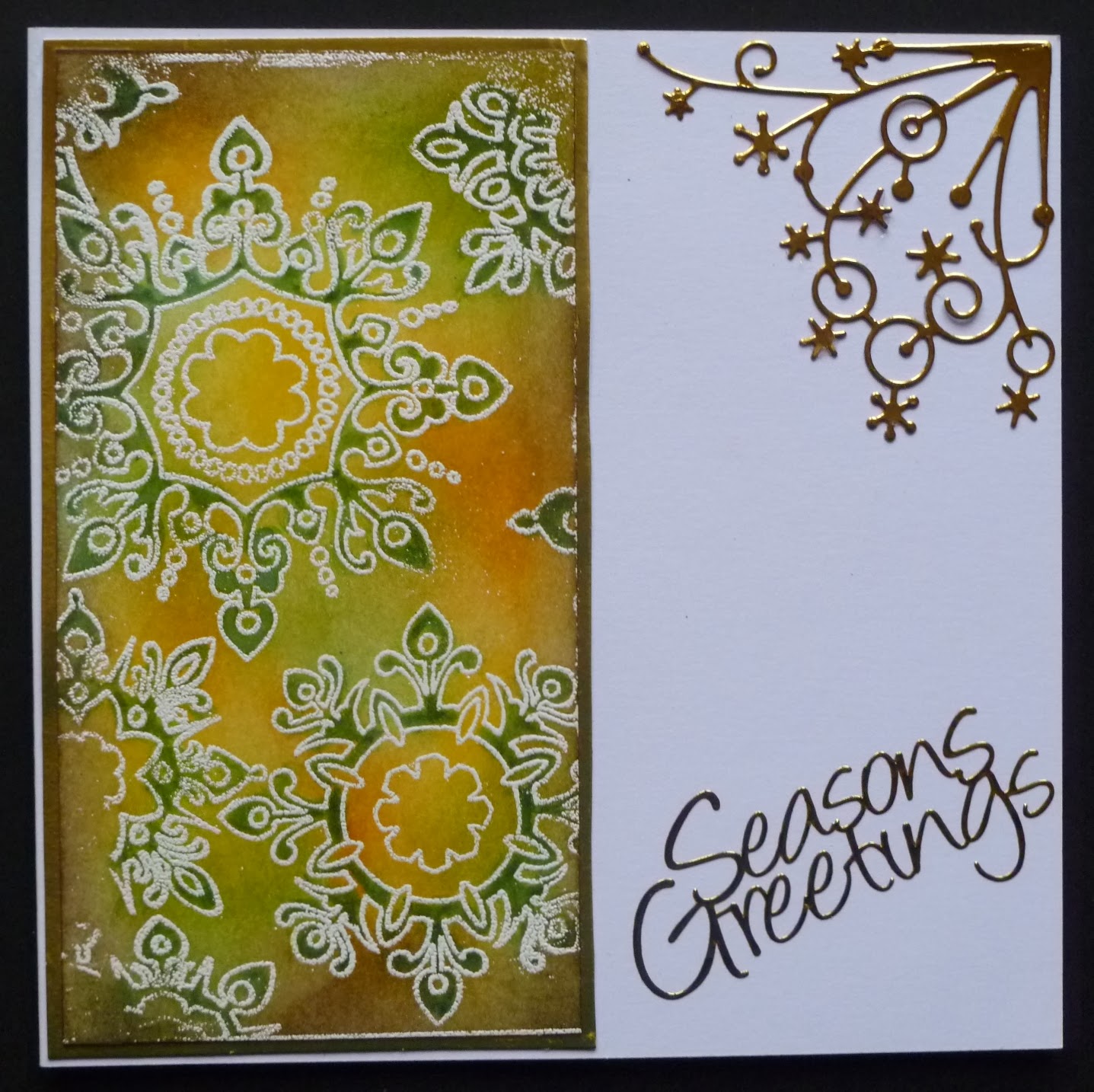 The inks that I used were Adirondack Dye Inks in Sunshine Yellow, Lettuce and Bottle, and  Walnut Stain and Spiced Marmalade Distress Inks.  I used the Bottle with a little water and a brush to fill in the snowflakes.  I usually smear a little ink from the pad onto my glass mat and sometimes I us a water brush, but this time as I wanted a nice fine line I used a Royal and Langnickel brush.  I finished the card by mounting onto Gold Mirri and cut a Memory Box Snowflake Corner from the Mirri card and mounted these on a square white card finished with a gold sentiment.

Thank you for stopping by my blog today, and hope you all have a good weekend.

I am entering this card over at Pixie's Crafty Workshop  as I have used some snippets/scraps of white card and Mirri card.

two smashing cards Pat - but I really like the colours of the second!

These are both lovely Pat, but I think I like the second one best. I like the die cut corner. These stamps are great because although they are quite big you can get away with using just part of them to make nice cards as you have done.
Jean x

Loved both of these, and I have got to try this acetate stuff. Bought some in Fla, but not tried it yet. I read where you mottled the blue background on the back side, but did you emboss & color on the back as well? The vivid one was so very pretty & festive, but I have to say, my fav is #2. I love the gold tones with the greens as it is so rich & elegant...like such gorgeous wrapping papers. This is really a lovely set of CB snowflakes, and I'm enjoying seeing different bloggers using them. I think you did a wonderful technique on each card, yet made them look so different with the same stamps. Very versatile. TFS & Merry Christmas.

Both cards are lovely Pat - the second one is extra lovely. IMHO :)

Two lovely cards...Hard to pick a favouite as they are both lovely. I guess if pressed Ii would chose the second card as it is made from non traditional colours that looks fantastic! I need to go out on a limb more and shose some out of the box ideas...sometimes my cards get a little boring.

Hi Pat, both cards are beautiful, I especially like the elegance of the 2nd. The colours are fabulous on both. I actually have this stamp on my wish list (I have 2 other snowflake BBB) as this one is great for colouring. The MB flourish is a beauty, one of my favs. Have a wonderful week, Shirleyx ps.. thanks for taking time to leave such kind commentsx

Your cards are astonishing, Pat!! They will be a huge hit at the Playground! You are right, they look like totally different stamps just by varying the execution; both equally beautiful!!

If I don't get back again before Christmas, I wish you the happiest holiday and new year!! Hugs, Darnell