Sung from the Heart

When thinking about a challenge which calls for a rainbow, as in the challenge over at Less is More this week, the song which goes.... red, and yellow, and pink, and green, purple and, orange and blue, I can sing a rainbow, sing a rainbow too.... springs to mind.  There are also a few challenges at the moment with hearts, it being nearly Valentine's Day, and after thinking about it for a while I came up with the idea of weaving the colours of the rainbow together to make a border and then adding, guess what?  Hearts of course. 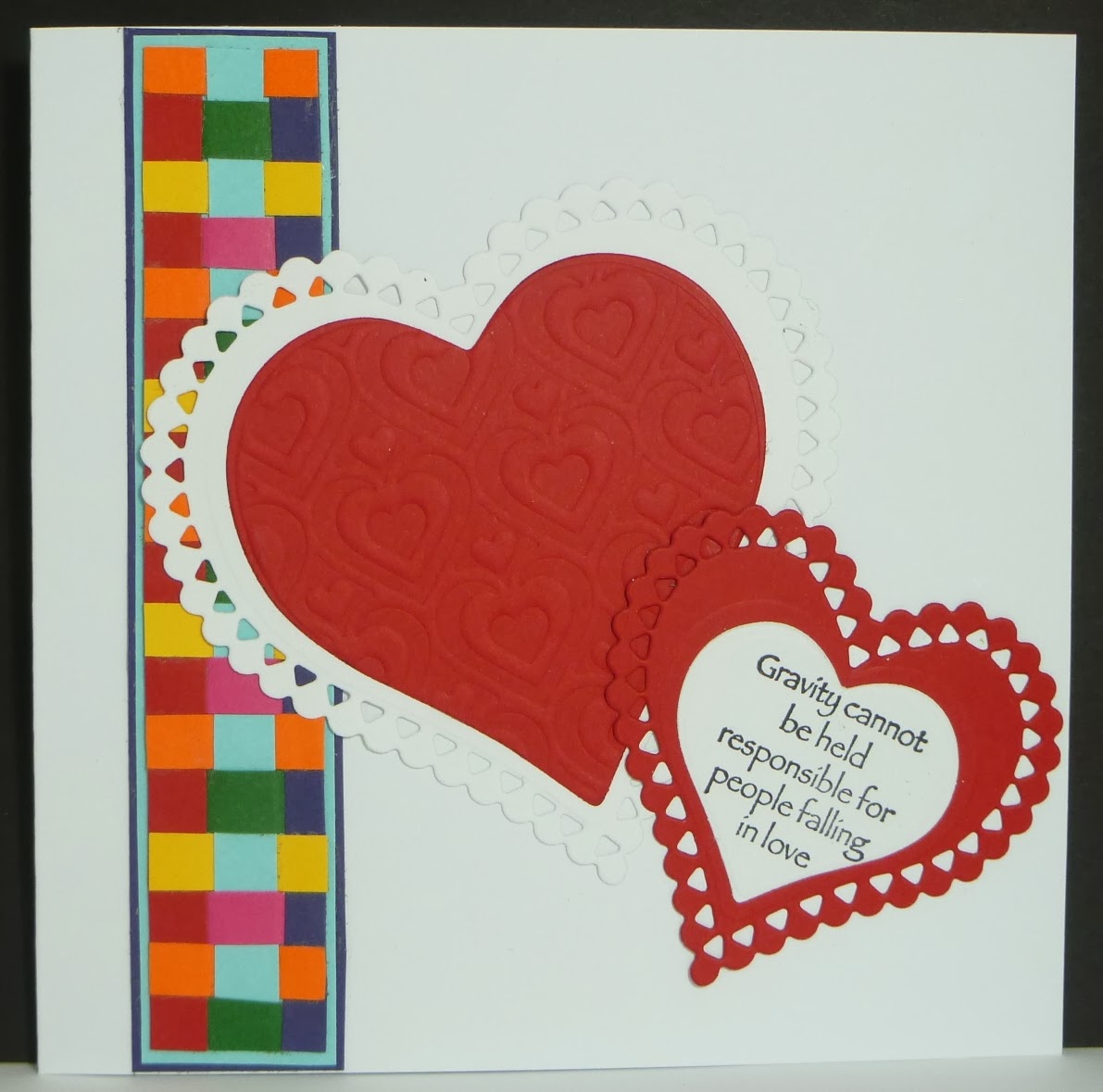 As the light has been appalling lately I tried the trick of using a plastic box lined with paper as a light box, lit with my daylight lamp.  It has worked well I think, and thanks go to Mary H whose blog I saw it on when she tried it out herself.  The only problem is that the light I used was so bright that it showed up every little bit of the photo glue that was still stuck to the card after the weaving process, which my feeble eyes had not noticed until after I had photographed and put everything away, but never mind, it will have to do as they say.  I use the photo glue a lot because it is very forgiving and will rub off  if it goes where you don't want it to go.

I found some scraps/snippets of thinnish card cut into strips about 7mm wide by 15cm long.  I chose the red, blue and purple as the warp, and the green, orange, pink and yellow as the weft, as the shorter lengths are easier to weave in and out, and just continued with green, orange, pink and yellow to the end.  I mounted this on to scraps/snippets of  the blue and then the purple.  I mounted this on my usual white square card.

Next  I used my Nellie Snellen Multi Frame Heart Die.  I cut out the largest heart in white, and made an inner heart in red with the next size die, which has a plain edge, and then embossed this with the Cuttlebug Embossing Folder - Kimmy- Luvs.  To give it a nice clean edge I embossed it with the die still in place, although in the photo the clean edge is difficult to see.  You have to lay the EF open on the base plate with the die on top, and the flat side against the EF.  The side that cuts must be face up otherwise the pressure can ruin your folder.  You then use the tan mat and some shims, or a second silicone mat for extra thickness, and if using the Grand Calibur the raspberry plate.  I did try using the pink plate as the folder is laid open, but it was too difficult to send through so the shims and the raspberry plate are the way to go.  With other machines you will need to experiment to see what works best.

I then cut and embossed the next size fancy heart from the same set of dies using red card, and the next smallest plain edged die cut and embossed in white, with a sentiment from Chocolate Baroque - Rose Stem Script  stamped with  Archival Ink in Jet Black.  I used the Archival because the stamp is quite fine and this tends to pick up the finer lines better.  This is a quote by Albert Einstein, but I covered the name over before inking in order to fit it into the space.

I would like to say thank you to Barbara Daines - glitterati1.blogspot.com, and Karen Petitt  - stampinginpink.blogspot.com for becoming followers.  I'm sure they would appreciate you popping over for a visit to see their lovely work.

As today is Friday another weekend is looming and I hope it will be an enjoyable one.  That saying, the weather at the moment seems to be bad for a lot of people.  I know there are places fairly near here that have had some flooding, but let's hope there will be some improvement soon!

This looks really good Pat. A great bit of paper weaving and I love the embossed die cut hearts. Thanks for sharing how to do that as I am trying to find ways of getting more from my EF.
Jean x

Hi Pat. Lovely card with the fancy-edged hearts and rainbow paper. Thanks for joining us at ATCAS.

Very pretty card , I love the ornate hearts and colourful strip. Thanks so much for joining in the Simon Says Stamp Monday Challenge. Tracy x

I didn't see any glue when I enlarged the photo! Looks fine to me! Thanks for the shoutout on the lightbox, but the idea came from Cornelia (http://fun-stamping.blogspot.com/2014/01/photographing-cards.html). Glad you tried it, and we'll both have to keep experimenting to get it just right for us! Your card is lovely, and thanks for the EF embossing with dies tips. Never tried that, and you certainly got a beautiful effect with the process. Your weaving idea for the border is fantastic. This is a wonderfully bright & beautiful card for V Day..and I bet only you will notice your 'glue'. Didn't show when I enlarged, and I really looked hard for it! Hugs & hope the flooding doesn't get to your area. TFS - Happy wkend.

I'm so sorry that I'm so late in visiting this time!
This is really sweet, you must have spent ages weaving that border.
Thanks so much
Chrissie
"Less is More"

What a colorful card, Pat! Thanks for sharing it with us at the Simon Says Stamp Wednesday Challenge!

Oh, how gorgeous! Love it! Every hand-made card design is unique but this one stands in a class of its own-------such a hopeful theme for the main topic of everyone's concern this week leading up to Valentine's Day with the woven rainbow! Just how do you come up with your ideas----? Brilliant, Pat --- oh, and I love the sentiment! M xx

A lovely rainbow strip and those dies are gorgeous. Thanks for playing along at Cuttlebug Mania this time x

Pat, this is unique and charming and beautiful!! Well done weaving your rainbow!! And I love that new-to-me sediment, too!! Enjoy the weekend! I hope the rain lets up soon; mercifully, we are finally getting some much-needed rain here. Hugs, Darnell

Great card Pat, just love that sentiment. Thanks for playing along with our Love challenge at ATCAS.

I love those hearts, so pretty. Thank you for joining in with our Touch of Red challenge at Cuttlebug Mania x