A Great Pear or Two

Hi there.  Hope you are having a good weekend.  I need an anniversary card shortly and I saw this card design on the Clean and Simple Challenge Blog here.  It just appealed to me, and isn't the sort of anniversary card I would normally make but I liked the sentiment too - just thought it was amusing and a bit different.  I searched around for an image I could use and eventually found a free digital image at Beccy's Place, and there is also a tutorial on how to use Copics, but I have used my Spectrum Noir pencils to colour it.  Colours include Yellows 10 and 12, Greens 50 and 52, Browns 96, 99 and 104 and Reds 27 and 33. 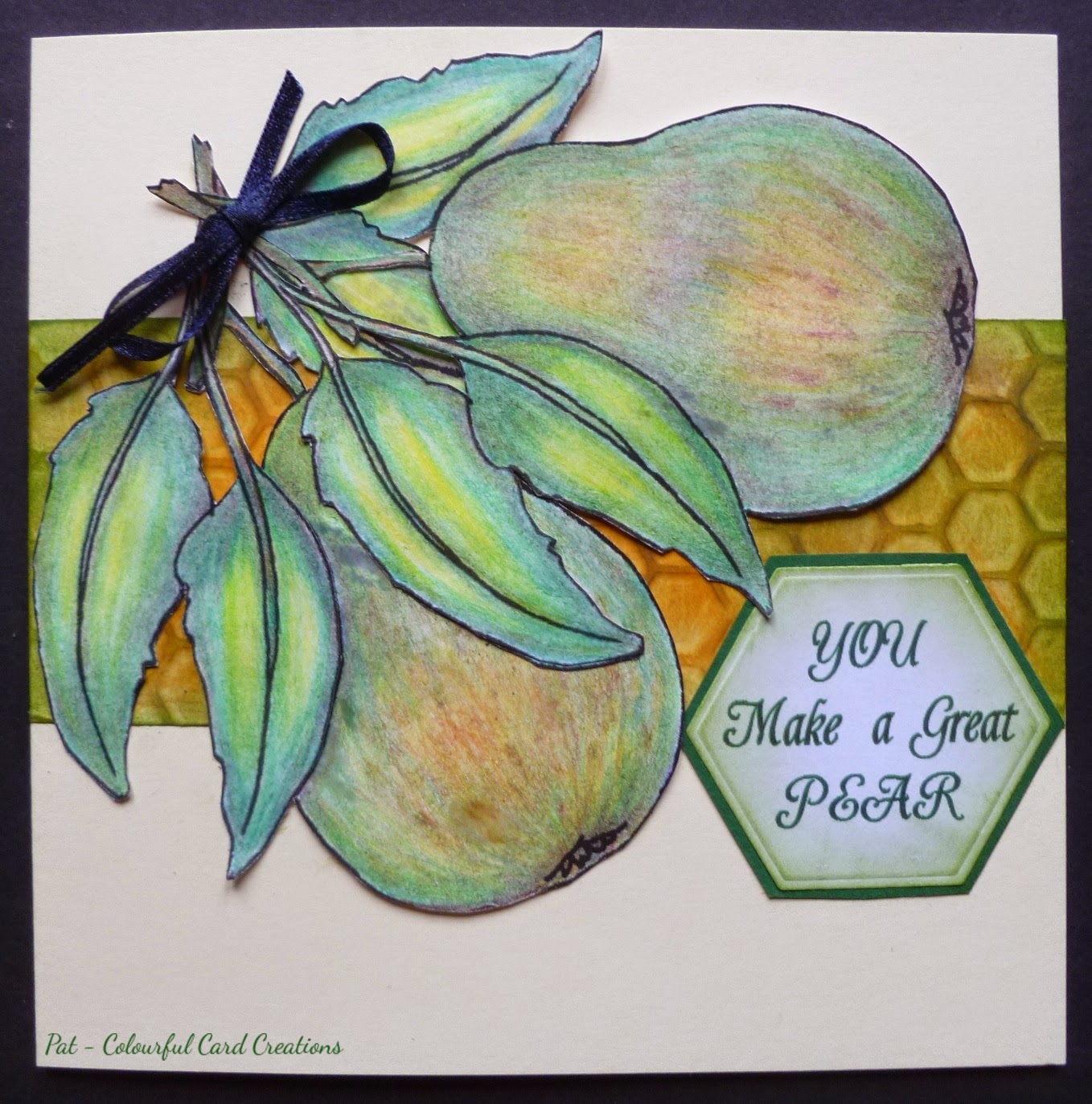 I printed the image on to some inkjet paper I use for inserts which I wasn't sure would be thick enough, but trying to get a printer to take card is not an easy task.  Anyway I started colouring and it seems to have worked fine.  For the background I decided to use my Tim Holtz Honeycomb stencil which I hand embossed.  I laid a scrap/snippet of my inkjet paper over the stencil and using a fairly large ball tool rubbed over the stencil to get the impression.  It worked fine and then I inked it with Distress Ink using Walnut Stain, Spiced Marmalade and a little Mowed Lawn round the edges.  I finished by printing the sentiment on to the same inkjet paper and using one of my Xcut Nesting Hexagons dies I cut and then mounted on to a snippet of dark green card.  I also tied a piece of black ribbon round the top of the two pears tying them together.  This was recycled as I cut it out of a new top which I bought recently, and didn't seem to be necessary for hanging the garment up so I found a better use for it.

I have to say that the gremlins struck again.  I cut out and mounted the pears using my Pinflair Glue Gel which I thought would give them just a little more shape.  After I had glued them down I noticed there was some of the glue showing through, probably because the paper wasn't that thick and maybe it could have been something to do with the pencils which are quite waxy, and maybe it reacted to them too.  I just hoped when dry it would just disappear, but unfortunately it didn't.  I have to say the air was a little blue as I had spent quite a bit of time on the colouring, which, I hasten to add, I did enjoy.  I decided I would have to do two or three of the leaves again and place over the top as it was the leaves which were the worst.  The pears themselves escaped apart from some quite small marks which I have left as pears do have blemishes so that's what they are.  I stuck the new leaves over the top but this time used my Collall Photo Glue which is fine.

Thank you for stopping by and I look forward to being here again soon.

Clean and Simple Challenge 303.
Pixie's Crafty Workshop - Week 139 where we use up snippets of card and paper.  I did use up a snippet of inkjet paper for the background.  Not much of a snippet but hopefully ok for the challenge.
Spectrum Noir - August Challenge.

This is a fabulous card Pat, your colouring on the pears is fantastic, so realistic. Like you I always cut those ribbons out of new clothes and save them for craft purposes.
Jean x

Oh, this is so pretty! Pears on a border paper decorate our kitchen (don't ask me why I picked those! Everyone else was doing apples, and I liked the pear motif!). You've colored these beautifully. I was looking to find the glue problem area, and I must say I'm not seeing it. Loved your honeycomb idea too. That was a great technique and seems to have worked a treat as the pear background. Your shading & streaking on this digi is just really good coloring. I'm going to see if I can find that digi! Still trying to catch up. Hope that the internet will stay more stable this evening so I can get round to people, and also relax while enjoying some pretty cards. Hugs &TFS (TFS for the digi link too).

Wow Pat what an amazing, birthday card, I really love the image but I think your colour use is so pretty , I've never seen such beautiful pears and the colours of the leafs are so wonderful too ( sorry when I make mistakes in my English, but I come from Belgium and it's a very long time ago since I had to write English!!) Thanks for the commands on the CB blog!!!

Fruit does have little0 marks and discolourations...so they look perfect to me...just like real pears. Good leave on the leaves though!
This is a lovely card...perfect for an anniversary!

Hi Pat - what a gorgeous card. Amazing colouring and such a clever sentiment too :) I can't see what you mean about the glue, yet have experienced it. I think it's the greasy silicon in Pinflair which seeps through certain paper/card. Neatly hidden though!

This is a lovely card. Great colouring too and nice recovery on the pear juice!
Hugs
xx

I have certainly colored the air blue in the Playhouse over these last minute hiccups, so I can certainly relate to your glue frustrations, Pat! I came over from Pixie's to congratulate you on the showcase! You deserved it. This whole card with the sweet and fun sediment is sensational!! Your coloring is flawless!! Hugs, Darnell

Pat this is a really lovely card and the colouring is excellent - I can't see the problem areas either - if you hadn't owned up none of us would have known :-) . A worthy winner of the Spectrum Noir prize.