We received an invite to a wedding for which I made this card,  and the day went well.  As the weather this time of year can be a bit unpredictable it was just as well it was at a wedding venue so mainly indoors.  The weather was at least dry if overcast and chill but not freezing so they did manage some photos in the rather lovely grounds.  We luckily only had to brave the elements for about ten minutes which was quite enough as my outfit wasn't terribly suited to the autumnal conditions, especially as the wind had started to blow a bit!

I haven't made many wedding cards in the past and was lacking a little inspiration so did my usual trick of looking on Pinterest to see if anything fired my imagination.  I decided to go with a silhouette bride and groom and found an image which I adapted  a little as I thought the totally black silhouette was a bit heavy looking.  I fussy cut one image out then on the second I cut the skirt and train out and cut part of the upper body and shaped it into a strapless top.  I used these two bits as templates and then after pencillling round the shapes on to a snippet of heavy-ish white paper I cut them out and glued them in place to give the bride her white dress.  I then decided perhaps she would look nicer with an embossed train so cut the original template down and embossed with a Cuttlebug EF called Textile Texture which I thought had the look of lace. 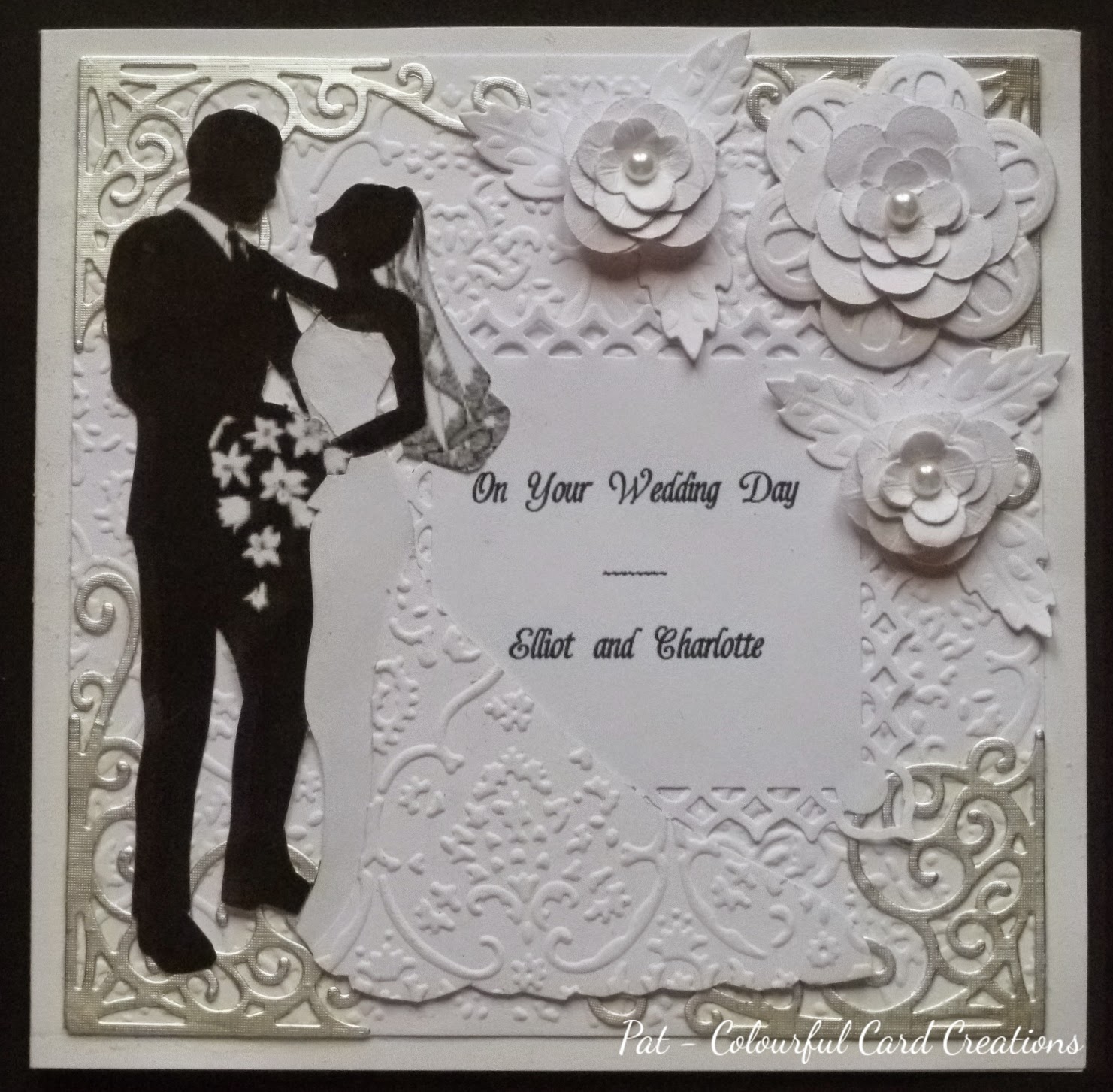 I then thought I would use the same EF in the background so cut a snippet of white card to fit the white square base card and ran it through the folder.  I die cut some corners from a set of NBUS dies (Never-Before-Used-Schtuff as coined by Darnell of djkardkreations)  from Sue Wilson at Creative Expressions called Vintage Bauble  using silver Mirri card and glued them to the embossed background.

I then made some flowers from another Sue Wilson NBUS die called Classic Rose.  Using a snippet of white card I made two flowers using all the dies except the largest of the plain dies but added an extra layer of the second smallest die to fill it out a bit.  I snipped away one petal out of each one and shaped and glued them, then layered them up to form the flower and set a pearl in the centre of each.  I then cut another set of plain flower die cuts using another snippet of white card, but this time I also cut a large patterned flower die cut and glued it on top of  the largest plain flower die cut and then  layered the rest on top without cutting away any of the petals except I cut an extra small one for the top layer on which I removed a petal and also attached a pearl.

The last step was to make the sentiment  which I did on the computer and then cut out with my S/B  Captivating Squares, the second size die.

I hope you haven't found my post too long winded but this was a little more complicated than a lot of cards I make, but as this was for a wedding we were actually attending I wanted it to be extra specially nice.

Pixie's Crafty Workshop - Week 153.  Where we use up our snippets of paper and card, and as I used quite a few snippets on this card I am going to visit my friends over there.

P.S.  Thank you to Di, who has subsequently highlighted my card over at Pixie's Playground, for her lovely comments.  I have only just realised that she thinks the little flowers in the bouquet were added by me.  The only white pieces I added were the bodice and skirt with the embossed train added over the top.  I apologise for not explaining it clearly enough and for not reading Di's original comment properly otherwise I would have put her right.  I didn't want anyone who might come across the original silhouette to think I was claiming for work I didn't do.  Thank you so much for all the lovely comments that have been left which I really appreciate.

Wow Pat - this is just fabulous!! A perfect Wedding card and so many gorgeous details. I read everything with huge interest - so much work! And right down to the beautiful bouquet as well, just wonderful!

Wow Pat such a gorgeous and elegant Wedding card, the happy couple will love it! Have a great week, Shirleyxx

What a beautiful wedding card Pat, such a lot of lovely details. The happy couple must have been delighted with it.
Jean x

A stunning card Pat, with so much detail on it. I'm sure the bride and groom were thrilled with it. xx

You did a spectacular job on this beautiful snippets wedding card, Pat! Thank you for sharing the details. The couple will have this in their keepsake box forever!! Hugs, Darnell

Your clever creativity with designing as you did, amazes me. (1) that you thought of the idea to add that train to something you'd already fussy cut(2) that you pulled it off so spectacularly. This is just so stunning, and very glamorous as well. That EF was perfect as her lacy train, and was a beautiful tie-in to the card's embossing. Those corners...well...they were beautiful too, and the flowers were gorgeous. I'm sure this will be a treasured memory of their very special day. It's easy to see that a lot of thought & skill went into this magnificent creation. TFS & Happy weekend. Hugs

Just saw this in the snippets gallery and had to come tell you how beautiful it is. Wow, the amount of work you put into it is amazing, and you've created a one-of-a-kind masterpiece.

I saw this in the Snippets Playground, and came for a closer look. It is a fabulous card, so well done for all your hard work. I´m glad the day went well for the happy couple. I am sure they appreciated this beautiful card. Kate x

Such a beautiful card!