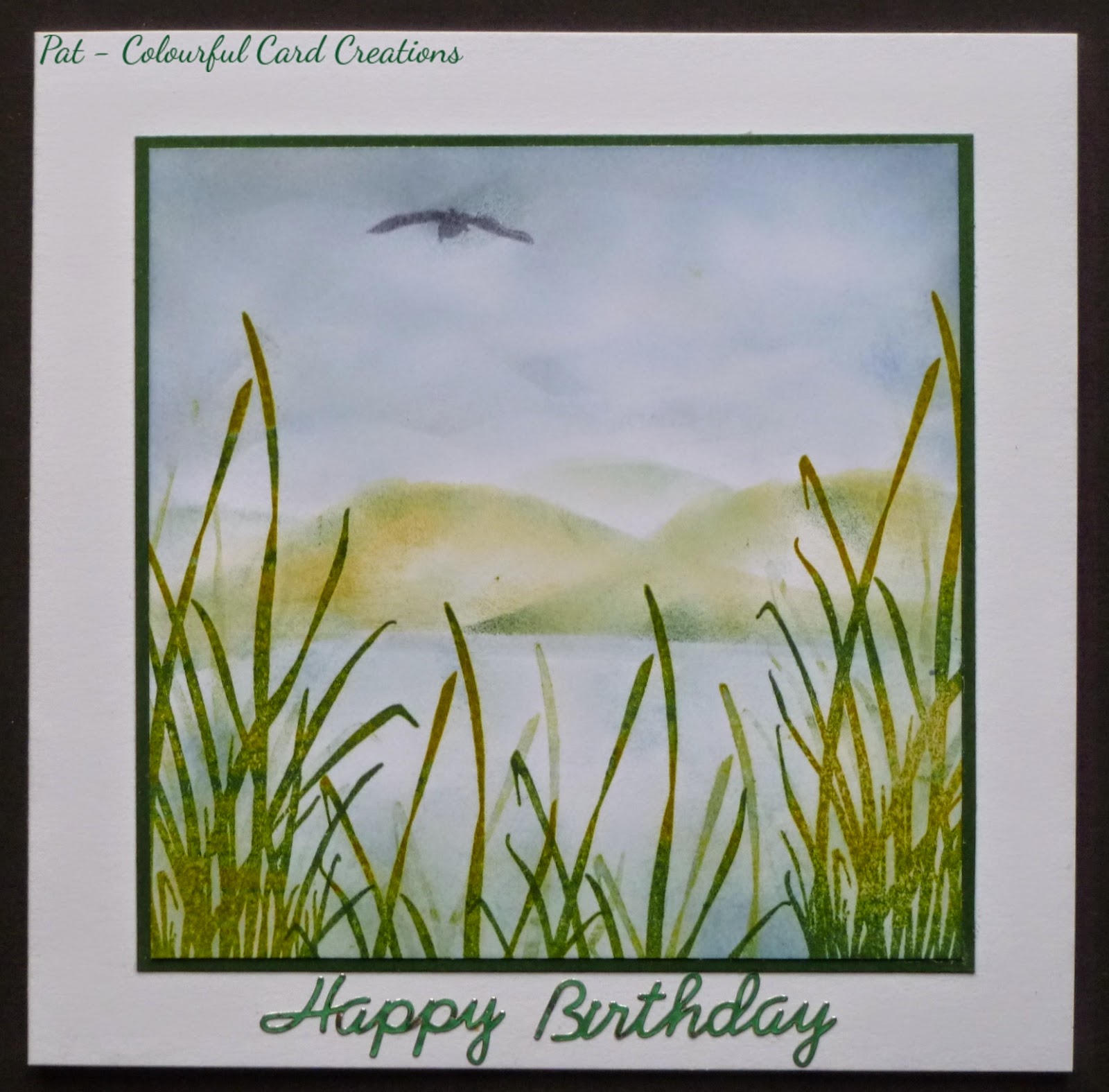 Beautifully sponged background and stamping! Thanks so much for playing along at Happy Little Stampers xx

Beautiful masculine card! Love the serene water scene. Thanks for joining us at Seize the Birthday!

Beautiful card Pat! So dreamy and your title is perfect. You created a really lovely soft and gently scene.

You've create a very peaceful and serene scene, Pat. Beautiful sponging and I love the variations of colour to add depth. Great job!! Thanks so much for playing along at Happy Little Stampers.

Thanks for joining us set Stamping Sensations this month

A beautiful scenic card Pat, great stamping and inking and right up my street.

Thanks so much for sharing your creativity with us at Stamping Sensations challenge.

It looks very pretty and serene. No windmill necessary.

This is splendid! (and yes I think you are indeed being too picky on your hill & bird!) The entire scene is so extremely well done, and the 'spot' that your bird is covering, looks like a cloud shadow, which fits in with the darker clouds at the top of the scene. Your hill looks 'defined' - not hard edged - at least to my eye. I'm impressed with the way you've sponged this - using such different colors to add great shading & light. The water looks very realistic too. So you just sit back and let us all tell you how great this card truly is!!! Big hugs & TFS (and I agree with Alison, doesn't need one other element to make it any better than it already is!).

This is beautiful Pat, I love how you've put this scene together. Thank you so much for joining in with our challenge at Country View Crafts and have a great weekend. Sue xx

What a restful and enticing scene. I love the soft colours.

Grogeous as is. Did not need the wondmill at all!

Your placement of the bird is spot on...the darker patch looks like it is supposed to be there...

WOW, Pat! I caught my breath when this opened up! What a gorgeous scene! It should be framed!

SUPER scenic card Pat. I am always in awe of those that create scenes . .. I have great difficulty with them!

Beautiful scene and design Pat. It's great for a 'man card', which I agree are harder to create. Most of mine are not suitable for a man. I was away so now trying to catch up on all the lovely designs! Happy Weekend, Shirleyxx

Pat this is so Beautiful!
Thank you so much for playing at Seize the birthday!

This is a natural style for you, Pat! It's obvious you have an eye for landscape design by knowing not to squeeze in the lighthouse and mess with the grass when it was "just right!" I hope you do more of these scenic beauties!! Hugs, Darnell

Beautiful scene! Thanks so much for playing along at Seize The Birthday :)

Hi there Pat, this a a great male card, love the scene you have created. Have a good week
Hugs Jennifer xx.

Wow Pat this card looks amzing, great colour use, great image, your card let me dream about a summer day on a lake, I just love it!!