Hi all.  I needed a masculine birthday card this week and I also saw that there were two CAS challenges where the theme was relevant.  The first is over at Less is More where they are asking for something with two or four legs, now this of course doesn't specifically have to be an animal, it could of course be a person, a bird or perhaps a chair or a table, but my elephant definitely fits the bill.  The other is over at Addicted to CAS where they are asking for an animal. 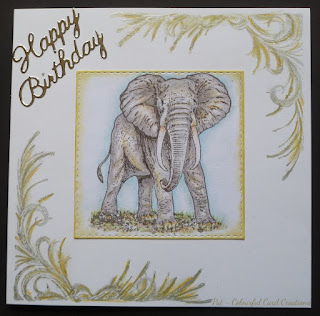 I used a Deep Red stamp called African Elephant.  I used the stamp here on the blog a while ago and I made a background scene, but this time as it is a clean and simple card I stamped using Versafine Smokey Gray ink on to a snippet of white card and coloured using my Spectrum Noir pencils, and then cut the image out using a Simon Says Stamp Stitched Square die.  These dies are different in that the stitching pattern is on either side of the cut line, so if you cut an aperture you get a nice line of stitching all the way round.  The dies are well made and cut beautifully but I did find that they were not the easiest to get apart as the 'pips' or tabs that hold the dies together in transit were so solid that they did not come apart very easily.  Maybe there is a knack to this, but in the end I used a fine small tipped buffer on an electric manicure set which I ran over and over each one, and finally they did come apart.  I don't know if anyone else has found this or perhaps the two sets I bought came from a particular batch where the tabs had been manufactured a little too thickly.

I finished the card with a couple of flourishes from a magazine freebie set by Sheena Douglass, which I stamped on to the base card using Brilliance Starlite Silver pigment Ink, and when dry I used an orange and a green Spectrum Noir pencil to highlight which I thought gave them the look of long dry grass.  I then added a die cut sentiment cut from silver mirri card.

Thank you for looking at my blog today, and thank you also for your continued interest.

A lovely image which really stands out with the CAS background. The flourishes are just perfect. xx

Oh this is fabulous, what wonderful image.
luv
Debby

Great colouring and I love those grassy flourishes. Thanks for playing at AAA Cards.

Fabulous elephant stamp Pat and your colouring is great. I love the simple design here and the corner flourishes are lovely.
Jean x

WOW! Superb image for our leggy challenge Pat and I'm thrilled to see you've linked up at Less is More and AAA Cards. Thanks so much. Sarah

What a terrific image Pat!
Lovely card!
Thanks so much
Chrissie
"Less is More"

Love the soft colours of your image, and the decorative corners.
Thanks for sharing with us.
Anita x
Less is More

Beautiful elephants - very soft and elegant. Thanks for playing along at AAA Cards :)

Awesome colored elephant~ Thanks for joining in at AAA

Beautifully colored image. Fabulous card. So glad you joined us at Addicted to CAS this week
Jaydee

That elephant is great! Very nice! Thanks so much for joining us for the Make it Masculine challenge on the Simon Says Stamp Wednesday Challenge blog!

Super card Pat and those flourishes work really well with your elephant.
Sorry to be so late commenting, I am playing catch-up!
Thank you very much for joining us.
Anne
Less is More

Great card, Pat. That elephant image is super and your design looks great.

Have not yet had that problem with stitched dies, but do know what you mean...seome of my dies with teensy parts are attached like that...what a pain!