Hi there.  Yet another anniversary card for friends whose anniversary was a week ago, and I also wanted to enter the challenge at  Addicted to CAS which is 'Banners'.  This card has only one banner but hopefully it will be alright for the challenge. 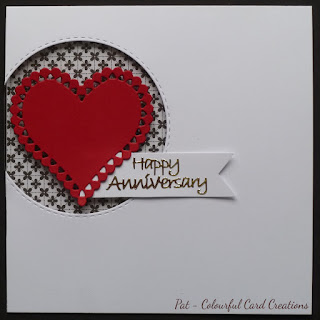 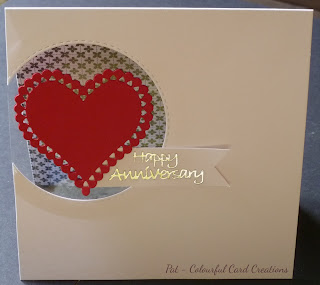 I decided on the cut out idea which I used on my chevron card last week, so I used my Stitched Circle die from Simon Says Stamp and then cut a frame from a snippet of white card, using the two larger dies, and this goes on the inside to neaten it up.   The acetate was cut with a plain Xcut circle die which was a little large so I cut  1/4" off  it so the frame would cover over it when glued into place on the back of the cut out.

I cut two of my Nellie Snellen hearts, one for the outside of the acetate and one to cover it on the inside, using a snippet of red card, and cut the banner sentiment also using a snippet of white card, which I tucked under the heart on top of the acetate and finished it with a silver sentiment.  The inside of the card was covered with a piece of Papermania paper from a pad which I won over at Pixie's Playground quite a while ago.  I placed a die cut heart on the back of the card too to write the message on.

I have one new follower to introduce who is Sid and you will find his blog here.   He seems to enjoy anything which includes stamps and inkiness and I'm sure he would love you to go and take a look.

That's all for now.

I would also like to enter the following challenge:

Pixie's Crafty Workshop - Week 189 where we use up our snippets including paper and card.

beautiful card. Thanks for joining us at ATCAS!!

I just love this, Pat! Fabulous design and so clever how you've used the acetate. I think I might have to CASE this one. :-) xx

This is a lovely card Pat. I enjoyed reading how you made it. Barbxx

Fantastic card Pat! I followed your 'How-to' and aim to have a try at something similar - such a classy looking card!

This is lovely Pat, great card design. I like the Nellie Snellen heart die.
Jean x

This is so clever! Love the heart on acetate. Thanks for sharing the other photo that it can seen better.

That is such a beautiful heart, Pat and a great idea to have it on the asetate!!! Love that paper you've got on the inside!!! A beautiful card for your friends, Pat!!!!
Have a lovely Friday!!!

Beautiful & elegant card, I really like the clean style :) Shirleyxx

Such a cool design, I like the floating heart :) Thank you for sharing with ATCAS!

Hi Pat, finally had a check to start catching up on some visits. I am really liking the way you are doing these circle cutouts. Most attractive, and especially so with this lovely red heart and the houndstooth check in the background. I like this idea of the acetate inlay, and you've certainly mastered the technique. Really lovely card, so pretty with the gold embossing on the banner. TFS & Hugs

This is pretty Pat. I like the inset idea. Hugs Mrs A.