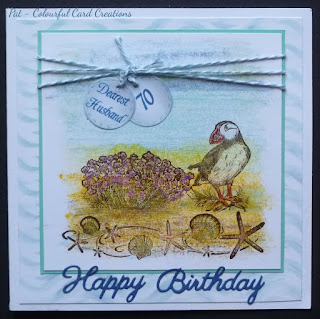 Beautiful card. I love the seaside theme and think it would be suitable for a recipient of either sex ... I'd certainly appreciate it and so would my husband :) The puffin is lovely and I like colours you've used to create the beach scene. Elizabeth xx

Wow! Pat - thank you so much for entering the playground with your stunning card. I'm not at all surprised that your hubby liked his card - it is a work of art! Definitely one to be framed.
Eve xx

A gorgeous card Pat, a lovely design with a lovely background and a beautifully coloured fabulous image!!

hugs
Heather xx
Thanks so much for joining us with Simon Says Stamp Wednesday Challenge.

What a lovely card Pat. I really enjoyed reading how you'd made it. My hubby is a keen photographer too and recently made a hide in the garden. Thank you for your visit earlier. I am your new follower. Barbxx

This is lovely, Pat, a gorgeous seaside scene. Thank you for sharing it with us at Stamping Sensations.

How could he NOT like this one? I enjoyed reading about the background techniques (another new one to me!) It was just lovely and the seascape is a perfect choice for someone who loves the sea. Love the stencil wavy background too, good design with the focal image. I think it is wonderful, and I'm sure Mr. did as well. Happy Belated Birthday to him. I see he's sort of in my generation!!! TFS & Hugs

Beautiful card, Pat. Thanks so much for joining us at Artistic Stamper this month.

Congratulations on being one of Eve's picks Pat. I did comment on this lovely card a few days ago. Barbxx

Notations of a Crafter said...

Gorgeous car Pat. Thanks for joining in the The Artistic Stamper challenge

Rather belatedly as I am only just back from holiday, but wanted to say thank you for sharing your lovely work and joining in our stamp and die theme at Stamping Sensations this month.