Hi everybody.  I expect some of you must think I am in a decline as I haven't been around for a couple of weeks or more but I have had a very busy time lately and yes I suppose you could say I have been in a creative decline in that the crafty mojo has been on a bit of a holiday but  hope it will return shortly.  I have in the meantime found a Christmas card which I haven't got round to posting so I have entered it at Rudolph Days Challenge which is run by Maureen of Scraps of Life by Scrappymo, and runs from the 25th to the end of the month. 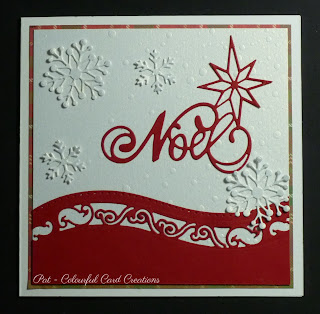 I used a snippet of red card to cut the curved border shape using Spellbinders Curved Borders One die and mounted that on to a snippet of white card.  I cut the Sue Wilson Noel Star die from another snippet of red card and mounted that as you see and surrounded it with the Craft Emotions Snow Crystals cut from another snippet of white card which I embossed with a falling snow stencil.  I then cut a slightly bigger piece of the plaid card which came from Dovecraft paper pad called Twelve Days of Christmas.  I think I might just as well have used a piece of plain red card instead of the patterned paper because it is so narrow you can barely see the pattern on it anyway.  I finished by mounting that on to the square white base card.

Edit:  I did manage to link my card but it is after midnight so hope it will be allowed.  If it is a bit late I will only be playing for fun this time!

Crafty Hazelnuts Challenge  - Anything Goes as long as it's Christmas.
Pixie's Crafty Workshop - Week 214 where we use up our snippets of paper and card.

What a gorgeous card. I love the border die and the Sue Wilson die. They are fabulous.

You are still in the running for the prize as the rules show the challenge ends at midnight PST. So you made it in time!

Thanks for taking part in the January Rudolph Days Challenge. I am awed at the entries this month...

Such a beautiful and elegant card!! Love the die cuts you have used!! Beautiful!! Thank you for sharing with us at the Rudolph days challenge.
-Berina
Moxie Craftie
Rudolph Days Challenge DT

Such lovely dies you've used to create this beautiful card, Pat!!!! Love how you've worked with only red and white!!! Very elegant!!!
I'm sure once you sit down to make a card the mojo will start flowing strongly again!!! Hope you enjoyed the break - so lovely to have you posting!!!!
Have a great day!!!
Hugz

You're certainly "back with a Bang", and so good to see you creating. Boy, you did outstanding with these yummy dies. Love the snowflake embossing, and of course the fab SW die cut. Very dramatic in the red & white and the rolling bottom border. Well done. Hope you are feeling a bit better now. TFS & big hugs.

Fab make and splendid use of die cuts, thanks so much for entering this for the January Rudolph Day challenge

Beautiful card and die cuts. The red and white look fabulous together. I hope you are doing well, Shirleyxx

Really striking card and a great design Pat! Love the wavy die you used - am sure I have that one or similar and it just never occurs to me to use it.

Thank you for coming to play.

It's good to see you posting, Pat! This card design is made from really fabulous dies and I love red and white for CCs! I hope your mojo juices start flowing again soon!! Hugs, Darnell

Great colours for a beautiful Christmascard!!!