Hi all.  I don't make cards for younger children very often and haven't got many stamps or dies which are suitable for these sorts of cards.  I have quite often had to go out and buy a card, heaven forbid, when I just couldn't think of anything appropriate to make, but this time I remembered a balloon die which I got with a magazine a good few months ago and this was a first birthday and luckily the idea I had worked quite well. 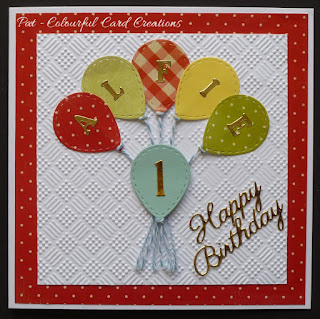 I started by finding some snippets of brightly coloured papers from freebie pads which I have had for ages, and cut five balloons and then an extra one for the number using a snippet of plain card.  I used some bakers twine which I fixed to the balloons with tape at the back and made them look like the strings were knotted on the bottom of the balloons.

I used one of the larger snippets to cover the front of a white square card leaving a narrow border.  I then cut and embossed a snippet of white card using a Sue Wilson Embossing Folder called  Checkboard.

I arranged the balloons and stuck them down to the embossed layer and added the gold letters.   I had to improvise with the number which is lower case die cut 'l'.  The Xcut alphabet set I have didn't seem to look right on the balloons and the stick on numbers were too tiny, but the die cut 'l' was more the right size and I don't have any die cut numbers.

I then die cut the sentiment which I backed with Stick It adhesive and adhered it to the card to finish.

Thank you for dropping by today and I really appreciate your interest and comments.

Pixie's Crafty Workshop - Week 220 where we use up our snippets of paper and card etc.

I love this card, so bright and cheerful, especially perfect for a child. I love how you've die cut the balloons using patterned paper. I think I have this freebie die too, in my NBUS pile. After seeing your lovely card, I'll have to look for it. xx

An absolutely super card Pat. The colours are lovely and bright and what a clever idea to add the name and age to the balloons. Very clever use of your freebie. Barbxx

Ha, I did a card a bit like this not so long ago Pat. A great design and perfect for a child with their name and age too.

Thank you for coming to play in the Snippets Playground :)

How naughty of me not to credit you Di but hadn't remembered your card until I went yo your blog for a look but unknowingly it must have stayed in my mind. x

This is really cute Pat ... and perfect for a 1st birthday. I like how you spelled out Alfie's name on the balloons ... really adorable! xx

Oh, so cute, Pat!!! Me, too, don't have anything to make kids' cards!!!! But you did a great job with the pretty balloons and the creative way to add the name and the age in gold!!! This is such a special card and it's lovely!!!
Have a great day!!!
Hugz

Oh! This card is so adorable and a personalized one is always so special! Thank you for visiting my blog and for your always lovely comments!

Pat, this is everything a child's card ought to be: Balloons, bright colors, and I love it too! Especially love the way you've brought in some fun snippets and the pretty red border over that gorgeous EF in the background. Good job, and you definitely aced it for this youngster's big day. TFS & Hugs

lovley card, I also have this fab balloon die, it is a great size xx