Hi there.  I had a family anniversary this last weekend and I made this card using the  Heart of Hearts die by Sue Wilson at Creative Expressions, and this is a lovely die because you can cut plain hearts in two different sizes and cut the little hearts out, or you can cut the heart shape into the card as I have done here.  I looked at Sue's Pinterest board and found this card which was on her blog in February, where she cut the heart four times into the piece of card which I thought looked quite nice so that's where I started. You can see her card here.  I also used an embossing folder from XCut  called Hearts and Kisses, and a Nellie Snellen Corner Die Corners 1 for the sentiment tag, the smaller of the two.  The silver embossed sentiment is from a stamp set by Verve called  Poppy Birthday, and the butterfly is from a set by Justrite called Multi-step Butterflies and Flowers. 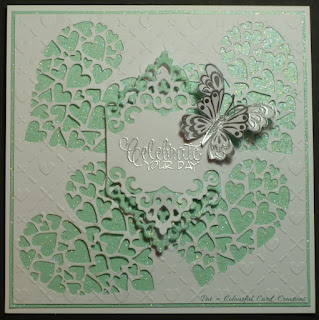 To begin with I cut the four die cut hearts out of a square white snippet of card and then I embossed with the Hearts and Kisses EF which I extended to cover the whole background and it matched up really easily.

With Mrs. A's Butterfly Challenge in mind I found a large snippet of mint glitter card which I cut just slightly larger to leave a narrow border round the edge when layered up.  The challenge asks for margins and although not a huge one there is a margin round the layer showing just a little of the white square base card so hope this is OK.

I found another snippet of white card which I cut with the Nellie Snellen corner die, the smaller of the two.  The die cuts into the card and before cutting the second corner I worked out how much space I would need for the sentiment before cutting the other end.  I then cut in a straight line at either side of the two cut corners to make the tag shape.  I  cut a second from a snippet of the mint coloured glitter card and cut it across the middle so I could stagger the two layers and have a bit of green showing beyond the top white layer.

I stamped and heat embossed the sentiment on to the tag using Versamark and some WOW Silver Embossing Powder and adhered it using a piece of thin foam tape to give it a bit of height.

Lastly I stamped and heat embossed the butterfly, just the pretty top layer, and after fancy cutting attached it to the corner of the tag using a small piece of the foam tape.

Thank you as usual for all the interest you show in my blog.  See you soon.

Butterfly Challenge  - M for Margins and/or Mint.
Pixie's Crafty Workshop - Week 223 where we use up our snippets of card and paper etc.
Cuttlebug Mania - Monochrome.  I have used a little silver but hope this will count as a neutral.
Simon Says Wednesday Challenge - Anything Goes.

You do realize you always make me leave here drooling over these fab SWilson dies, yes? You use them so effectively. Love the colors on this beautiful card, and brilliant use of the heart die. Love the way you met the border challenge with the center piece...that is so pretty! Well done! TFS & Hugs too.

Pat, thankyou for fluttering by my challenge with this amazingly intricate looking die cut card. The mint colour showing through is perfect and I love the butterfly. Hugs Mrs A.

What a fun background! I love the sparkle! Thanks so much for playing along with the Simon Says Stamp Wednesday Challenge!

Oh this is absolutely stunning Pat. I love the colours and the way you've used those pretty dies. Barbxx

A beautiful card Pat, a lovely design with a super embossed background and a super butterfly and embossed backed sentiment!!

Hugs
Heather xx
Thanks so much for joining us with Simon Says Stamp Wednesday Challenge.

Did you hear the squeal Pat? This is fabulous - LOVE how you sued those gorgeous dies. Or maybe even USED them (finger trouble!).

Beautiful card, I love the colour and the dies you have used.
Janice x

Oh, WOW, such a creative way to die cut the hearts and then do the dry embossing, Pat!!!! The soft green is beautiful and the tag with the sentiment go so beautifully with the bg!!! The butterfly is simply stunning!!! Lovely, my friend!!!
Have a wonderful day!!!
Hugz

I missed this! Gorgeous colour and confess to not having seen that EP before.... and no I AM resisting! x

Oh my, what an absolutely beautiful card, love your pretty colour choice too!

I love how you've arranged these hearts and that pretty mint green showing through! And the label made with corner dies is gorgeous! Stunning card, Pat!

This is so pretty Pat, just beautiful! Love the colours too. xx