Hi there everybody.  This is a card I made for my BIL's birthday.  I think that during the year I definitely have to make more masculine cards than feminine and it doesn't get any easier.  I always try my best to match the card to the person I am making it for and he does like walking and has an interest in nature and bird watching (the feathered variety).  My DH says that as a boy his brother would go off into the countryside and come back with a myriad of things which he would want to keep much to their Mum's disapproval, which apparently included an old bird's nest and an owl's wing and pellet and she would tell him to keep them outside and not in the house.  Anyway there are no bird's nests or owl pellets on this card ..lol, but it does have a nature/animal theme. 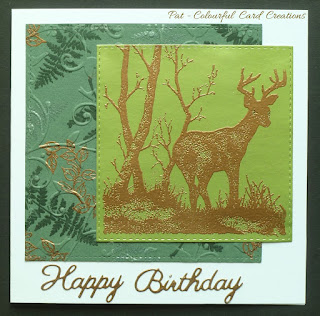 I started by taking a snippet of dark green card and a fern stamp from a set by Hobby Art called Falling Leaves and stamped it on to the card using Versamark Ink and heat embossed with WOW Embossing Powders in Clear Matt and Pearl White which really doesn't show up well in the photo.  I then used another leaf stamp from the set and filled in the gaps again using the Versamark Ink and WOW Metallic Copper EP.  I find it a good idea to dust the card with some talc before heat embossing as it helps to stop the powder sticking to the card where you don't want it too.  I finished by embossing the edges with a Die-namics die set called Basic Stitch Lines which has six different styles of edge which can be embossed on to the card, and I used the stitched edge.   I do have a set of stitched square dies but the largest only cuts a 4" square and I wanted it to be larger, so this is when this set comes in useful.  You can also use them anywhere on the card to make a pattern too.  Unfortunately they seem to be out of stock everywhere at present.  I decided to add some dry embossing and used a Cuttlebug folder called Birds and Swirls and this too doesn't seem to be available at present either.

Next I stamped this deer stamp from Serendipity called Buck using another snippet of light green card which actually has a shiny surface so I wasn't sure how well it would stamp but it proved to be fine, again using theVersamark Ink and heat embossed with the WOW Copper EP.   I finished by cutting this using my set of stitched square dies.  I did have to cut a bit of the stamped image away but it looks fine.  When I looked at the deer you couldn't see its eyes clearly so I put a dot of black pen on the eyes although it doesn't show all that clearly in the photo.

I assembled the card as you can see above and added a die cut sentiment.  In order to match up the sentiment I covered a snippet of card in Veramark Ink and then heat embossed using the Metallic Copper EP and placed it on to Stick It before die cutting.

Pixie's Crafty Workshop - Week 229 where we use up our snippets of paper and card etc.
WOW Embossing Powder May Challenge

Such a lovely card for your bil Pat. And no owl pellets in sight! :) Have a great weekend.
Flo x

Fabulous masculine card, well done! I don't make very many 'man cards', they are more difficult that's for sure. The flowers I like don't go well for them :) Take care xx

Brilliant card Pat - I love how much thought you put into the subject and recipient. That's one very personalised card. I do love those straight stitched edge dies I must admit - such a good idea.

Lovely to see you in the Playground, and as always such fun to read how you made this card.

I enjoyed your writing about your BIL, Pat, and could just picture him as a lad! I think you have personalized your masculine card to suit him perfectly and he will love it!! Hugs, Darnell

Beautiful layering of stamped and heat embossed images for your background. Adding the dry embossing gives it love of depth. Your buck image is gorgeous. I love that you've used copper embossing ... looks so beautiful paired with green. Bet you BIL was impressed with his card. Great job Pat. xx

Not only is the theme perfect for your nature lovin' BIL, but it's just beautiful with the layers, colors, that wonderful deer image. I really liked the embossing on the green layer too, loved that you have the different colors of EP on that piece. The copper WOW powder is fantastic with the dark green ferns & leaves. This is just phenomenal,& a pretty design layout. Pat. TFS & Happy Wkend.

I love this card pat. Green is my favourite colour and your bakground looks really lovely. They deer is a super stamp too. Barbxx

Gorgeous card, Pat. A perfect masculine card for a nature lover. I love how you've created the background. xx

Lucky BIL! :) Great card for a man. Copper and green go so well together... and one that I never thought of. WOW. Thanks for sharing, Pat.
x Asha

Hi, Pat!!!!
Haven't been around in Blogland for a few weeks, but I'm catching up on what everyone made while I was enjoying my other hobbies!!!!! And I can't wait to see what you created!!!!
This card for you BIL is simply stunning and so beautifully masculine!!!! (Oh, ...forever strugelling with masculine cards, over here!!!!) The deer is lovely and the green panel underneath that you have stamped and embossed is so beautiful!!!! This is a wonderful card and for sure your BIL loved it!!!!
Hugz