Hi everybody.  I bought this That Special Touch mask - Flying Ducks fairly recently with masculine cards in mind and a husband of one of my cousins has a birthday at the weekend so I decided to give it an outing, its first actually so NBUS!

I had in mind to use some texture paste which I have which is clear gloss.  Well, I had three attempts which were all dismal failures so I gave it up as a bad job and decided to use Versamark Ink through the stencil and heat emboss.  I used WOW Silver Metallic Embossing Powder on to a snippet of dark blue card and applied it through the stencil with a piece of blending foam which worked well.  I did need to tidy it up a little and there were inevitably a few stray bits but it was OK. 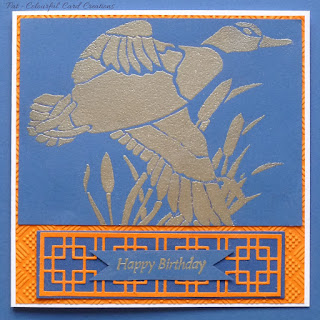 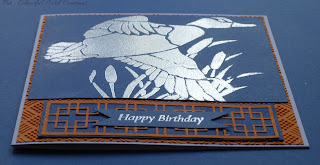 I also used a Creative Expressions Embossing Folder called  Checkboard Pinpoint and embossed a snippet of orange card which at first I wasn't sure about as it was a very bright colour, but once embossed and adhered to the base card with the dark blue card on top looked fine.

I had a space at the bottom which I decided to fill with a new NBUS Petite Striplet die called Tiled Squares.  I cut a strip from a snippet of dark blue card using the outside die and then cut the inner die using a snippet of orange, and layered the two together

I finished by stamping a sentiment with Versamark Ink and heat embossed using the WOW Silver Metallic EP using another snippet of the dark blue card, and cut it into a double fishtail banner and placed it over the Tiled Square.

Pixie's Crafty Workshop  - Week 232 where we use up our snippets of paper and card etc.
Uniko Challenge - No 32 Masculine with the Optional Twist of Father's Day which I didn't do.

What a striking card, Pat. The embossed bird is stunning and I love the die cut panel at the bottom. xx

I must be getting short sighted as I looked at this and thought Duck ! What Duck ! Then I spotted him! Lol. Great card. Great idea using Versamark and embossing powder. Really should try using it myself more. Hugs Mrs A.

Wow Pat - what a great card! I do love the flying duck with the die cut you used. A perfect card for a chap!

Great to see you in the Playground!

Awesome masculine design, Pat! Great idea to use versamark and EP through stencil. The dry embossed panel and the tiled sauares die give the card a gorgeous oriental look! Thank you so much for your lovely words on my last post :)! Have a wonderful Summer!

Fab-U-Lous! I know what you mean about that paste. Sometimes it just makes a mess and sometimes it works well. What you eventually did with the EP looks marvelous though. The silvery metallic against the blue shade shimmers beautifully. I'm also very much liking the orange border embossing. The color combo is bold & splendid. Perfect for a guy. You did a great job! TFS & Hugs

Great masculine card Pat. Love the colours - you've definitely nailed the embossing with yr stencil, even if it took a while! Lindsey x

Oh, the birders in this house (hubby and my eldest son) would just love to receive a card like this, Pat!!!! The orange works wonderfully with the blue and the shine of the bird and the sentiment is so lovely!!!!! Really beautiful, my friend!!!!
Have a great weekend!!!!
Hugz

Wow! This looks fab. That card will be well loved as it is perfect for a fellow.
Iyt is so hard to get a photo of card that shimmer...Love the look of the silver in that angled flat card in your second photo. The first shows all your yummy details but the second sure shows that shimmer!

Impeccable heat embossing Pat and the flying duck suits it too. FAB masculine card. Thanks so much for sharing and joining in on the Uniko Challenge. Hugs Bev x