Hi there.  Well here I am with another masculine card and using the Chocolate Baroque stamps with an underwater theme called Funky Fish and Steampunk Sea World.  I decided to look at the fish through a porthole and that's where I started. 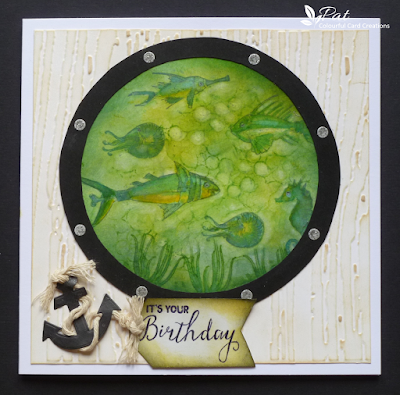 I began with a snippet of white card and die cut a circle using the biggest die, which is 4", from a set by XCut.  I started by blending inks on to the circle using a blending tool.  I used Adirondack Lettuce and Stonewashed,  Mowed Lawn and Stormy Sky Distress Ink, and the Peacock Feathers was used mainly on the fish, nautilus and seahorse.  I think my sea has ended up rather more green than blue.

I picked a selection of fish stamps across the two sets keeping to the smaller sized stamps and made a pleasing scene.  To make the bit of greenery at the bottom I used the tentacles from what I think is a squid, inking just the smaller tentacles, which worked quite well.  I coloured with a waterbrush using the same inks as mentioned above but with some Adirondack Sunshine Yellow added in.  I did add some interest using a stamp by Creative Expressions called Bubbles, and then using the same inks as above, I darkened around the edges and then decided to take away some of the colour within the bubbles and around the fish etc by bleaching out with water, as I thought the whole thing was beginning to become too dark and heavy.

For the background I found a snippet of white card and embossed with a Sizzix Embossing Folder called Woodgrain, this comes as a pair together with one called Bricked.  I had to extend it  a bit to make it square.  I used Antique Linen DI to colour it with.  I mounted this on to my white square base card.

To make the porthole I took a snippet of black card and cut a circle slightly larger than the 4" one I cut originally.  To do this I scoured the kitchen to find something circular with the right dimensions and finished by using a holder for my kitchen utensils and pencilled around the base.  I cut this by hand and then cut out the centre by using the largest XCut circle I used earlier but this time pencilling round the inside of the die so that when cut out it was a fraction smaller to cover the edge of the original circle.  Note to self, I MUST buy some more circle dies so that this process is less labour intensive and gives a better finish! The XCut dies are a great basic set which I bought several years ago and have used quite a lot, and I also have some stitched circles, but both sets have about five dies and they have an inch in between each die which for something like this doesn't work.

To finish the porthole I found some little round dots which I stuck on and coloured with a silver Sakura pen which has a glitter finish but looked OK for this.

I decided to embellish with an anchor die, one of three, which go with a set of Lawn Fawn stamps called Float My Boat, but the die works fine on its own, and using another snippet of black card I cut the anchor, and using my pokey tool I made a hole in the top big enough to take the twine which I doubled, twisted, and wrapped round the anchor and then stamped a sentiment on to a snippet of white card using Black Archival Ink, and cut it into a tag shape with a fishtail, and coloured using the Antique Linen DI and a little Black Soot DI.

To finish I adhered the scene and the frame and then added the anchor and sentiment tag which,  with hindsight, would have looked better with a smaller sentiment so it would have cut into a smaller tag, and I'm not sure that I like the colour tone I ended up with, but hey ho it's done now and I will stop being picky Pat..lol.

Thank you for joining me here today and I will see you again soon.

Pixie's Crafty Workshop - Week 246 where we use our snippets of card and paper etc.
Simon Says Wednesday Challenge - Stamp It.
Cuttlebug Mania - Anything Goes with die cuts.  (I cut the image circle and anchor using a Grand Caliber.
Penny Black and More - Add  A Sentiment.
Stamping Sensations - One for the Boys.
*Shown in the October Chocolate Baroque Reader's Gallery.
Posted by Pat at 5:30 pm

Great card Pat, the fishy scene is fun and I like your bubbly water background.
Jean x

Hi Pat, what a fantastic card this is. I like how you've brought lots of ideas and techniques together on this lovely card. What a clever idea to use the squid stamp to make your seaweed and super fussy cutting too. I find it almost impossible to cut a tidy circle by hand. Great work. I LOVE it. Barbxx

A brilliant design, and great use of the images to create this scene. Smart to use the squid legs as sea grass. Just FYI, sometimes the underwater of the sea _can_ look green! This looks very realistic, especially like the bubbles texture. The porthole idea is another super design idea, and it's a great way to enjoy the seascape! Lots of color, texture, details...a terrific card, Pat. TFS & Hugs.

Forgot to say, the 'rope anchor' was a great embellie detail too.

A glorious creation for our Add a Sentiment theme Pat, many thanks for sharing your creativity with us at Penny Black and More challenge.

Pat, this is fabulous and I take my hat off to you for cutting those circles by hand so perfectly! I love underwater scenes too - so many elements as well.

My fave circles die set is this one -Tonic Studio 'Circle Layering' set. Icon UK sell it at £15.50 here, http://www.iconuk.co.uk/Tonic-Studios-Circle-Layering-Die-Set and it has 14 plain circle dies. I use it loads!

Wow!!! What a great masculine card with so many creative details, Pat! I like the color tone of your card. The slightly greenish finish gives the underwater scene a look of the deep ocean!

A fantastic card Pat, I love the punky fish from CB and the gorgeous look you have got to the underwater scene.

And I should have added Stamping Sensations Pat, thank you.

Hi Pat, Gorgeous design, and very creative! I love the colours and your use of CB's steampunk sea creatures. Have a great weekend, xx ps.. I'm going to scroll down to see what else I've missed :)

Love the design of this card, Pat, very clever! The fishy scene you have created is brilliant. xx

This is such a clever, artistic card. If you haven't seen it already I think you would enjoy Vicky Papaioannou's 'vitamin sea' youtube tutorial

Oooo what a simply stunning card and so perfect for men too, thanks for joining us at Penny Black & More this month, Luv Sam x

Fantastic card, love your design it's so clever! Cathy x