Hi there everybody.  It was my DH's birthday a few days ago, on Tuesday actually, and I recently bought some stamp sets from Sheena Douglass and one of them was this image from a set called Just Chilling which I thought was quite atmospheric and which he would like. 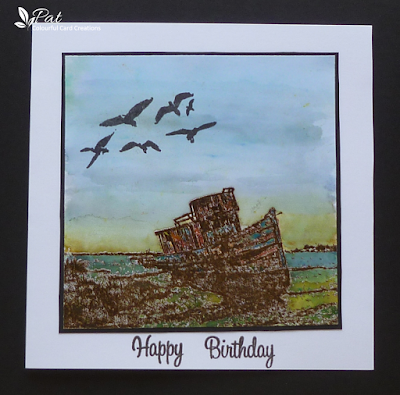 I started by stamping the image on to a roughly 6" square piece of white card using Walnut Stain Distress Ink and then heat embossed it with WOW Clear Gloss Embossing Powder.  I then set to work colouring it with my Brushos but using them more like paint with a waterbrush, and then I think I added some more colours into it with some of my Distress Inks too, so a bit of a hotch potch to get the result I wanted.  When I was happy and it was dry I added the birds using Versafine Smokey Grey ink and heat set again using WOW Clear Gloss EP.

I finished by adding a black mat before mounting it on to my 7" square white base card.  I then added the sentiment using my Misti and the Smokey Grey ink heat set with the Clear Gloss EP.  I did go over the stamp several times to darken it and the embossing always makes it look darker.

I don't know if I overinked the stamp and the Distress Inks always give a less defined finish to the stamping, but it did seem overly dark and dense but maybe next time I'll try using Archival or Versafine ink.  I only used the Walnut Stain as it was more the colour I wanted to represent its decaying state.

As soon as I saw this stamp it reminded me of a poem called Cargoes which I learned at school written in 1902 by a British poet called John Masefield and if you are interested the whole poem is here.  Although this is nothing like the size or shape of a cargo vessel, just the look of this rusting hulk brought the last verse to mind.

Dirty British coaster with a salt-caked smoke stack,
Butting through the Channel in the mad March days,
With a cargo of Tyne coal,
Road-rails, pig-lead,
Firewood, iron-ware, and cheap tin trays.

I hope I haven't made you all drop off with boredom...lol, and I promise I won't be going all poetic on every post.

Cardz 4 Guys Challenge - No 173 Beside the Sea.
Simon Says Monday Challenge - Distress It (it icludes the use of Distress Inks).
Penny Black and More Challenge - For the Boys.

I love your card Pat and it is very atmospheric a love card for a make....

Gorgeous card Pat :-) the whole scene is so beautiful and I am sure your DH loved it! perfect :-)

Cute! Thanks for sharing at Cardz 4 Guyz.
~DT Janis

A very atmospheric scene Pat and I am sure your husband loved it. Funny how those poems from school days stick with us, with me it's Tennyson's The Lady of Shalott.

Many thanks for joining us again at Penny Black and More challenge.

Such a personal and thoughtful card for DH. The colours work beautifully together. Isn't it fun to try different inks, products etc together and see what happens...or until you get what you want? x Yes distress inks don't stamp as crisp but in this instance I really do think you chose the right medium, as it does fit in well with the overall look and feel of the card. Thank you for sharing this gorgeous card x

A lovely card and I remember learning that poem at school too! Thanks for joining us at Cardz 4 Guyz.

Awesome card ! The scene is beautifully created, there is so much drama around it! Love the dark colors of the boat against the light sea! Well done!!
Thank you for playing along with us over Simon Says Stamp Monday Challenge - we hope to see you again next week! Zoey

Dear Poet Laureate......
Not only a poet but an artist too! Great card Pat. These stamps look fab (Shame I haven't got any time to go buy them!!)
Hope all Ok with you. xx

this is a fabulous masculine card and i bet your husband loved it! i love how you stamped the birds in the grey ink and created the background in different colours. thank you so much for playing along with us at the penny black and more challenge!
linda

Beautiful card for your DH's birthday. You always make the most fantastic landscape scenes, Pat. xx

such a lovely card for you DH...love the look of the scene Pat.
xx Karen

Fantastic 'man card' Pat ! The scene is lovely. Your lilac card in the previous post is very beautiful. I hope you are doing well, Shirleyxx

This is such a beautiful scene Pat and I have to say that that's not a poem that I'm familiar with, although it does goes absolutely perfectly with your scene here. Crafty hugs, Sandra x