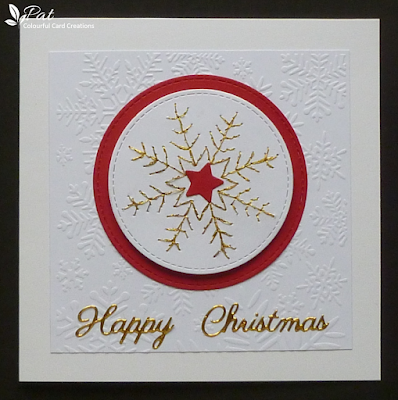 What a perfect clean and simple card! Good luck with our CAS-ual Fridays challenge!

It looks beautiful Pat! And I think your stitching looks great! I dislike sewing, so to choose to sew on a card would be something I would never do, but I must say, I could be tempted to try after seeing this beauty! Have a wonderful day my friend! Love & Hugs. Hazel xx
My Card Attic

It's a lovely christmas csrd Pat, I love the embossing and the lovely colours, Kate x

Beautiful card Pat and thanks for joining us at CAS-ual Fridays.

Wonderful design with your hand-stitched snowflake Pat. That must have taken a lot of time, but it turned out so beautiful. xx

So unique and so clever.Love the embossed background 'matching' the gold stitched snowflake. I would never think to stitch on a card and I think you are so creative x

This is such a lovely card Pat and your beautiful gold stitching is wonderful!
Thanks for sharing with us at ATSM, and I hope you will join us again soon. Good luck!

Absolutely gorgeous! The gold stitching looks really beautiful. And I love the pops of red. Thanks for joining us at the ATSM challenges. Hope to see you again in our gallery soon. All the very best! Nandini, DT

The gold stitched snowflake is pretty! Love the red mat and the matching gold sentiment! A beautiful and lovely Christmas card, Pat!

Hi Pat, How I love seeing your gorgeous gold embroidered snowflake on paper. When I first started making cards (approx 13 years ago), I was using Dutch techniques, paper folding, paper piercing and embroidery on paper and I loved it! I went on to doing needlework on linen and stamping took over, but my stash still includes tons of embroidery on paper patterns, templates and lovely floss, I can't part with them. Thanks for sharing and giving me an idea how to combine the 'old' with the new :) We are doing well, looking forward to our move, but it seems a long ways off still, we don' want to wish away the summer (which has been wetter than normal). Take good care, Shirleyxx

Your card is delightful and another to add to the pile for 2017!

Thanks for your visit to my blog earlier, sorry to read you are suffering with your gall bladder, hope you get some relief soon

great idea to stitch with the gold string.

I feel for you suffering with gall bladder...mine went toxic a few yrs ago. Boy was I sick. So much better when I got it out but I still have to be careful about what I eat. I use Bile Salts if I am going to eat a 'hard to digest' meal. take care,
xx Karen